Bears are in deep trouble. The S&P 500 opened broadly lower to start the week and many equity pessimists must have thought it was the beginning of a nasty October surprise. It didn’t work out that way, says Jon Markman, growth-stock specialist and editor of Strategic Advantage.

Buyers swooped in and the benchmark S&P 500 closed with a gain of 0.3%. This is the perfect backdrop for bulls. Seasonal factors suggest higher prices, the Federal Reserve is slowly tapering its purchases of fixed-income securities, and positive corporate earnings are starting to roll out.

FactSet analysts forecast the best third-quarter corporate performance since 2010. It is no wonder professional investors are buying every dip.

The S&P 500 is now clearly headed for a test of the record highs near 4,550. That move could come sooner rather than later if Q3 financial results play out as expected. Support is at the 4,437 level.

The Dow ended 0.1% lower to 35,258.61, while the Nasdaq gained 0.8%. Consumer discretionary led the gainers among the sectors while healthcare and utilities declined. 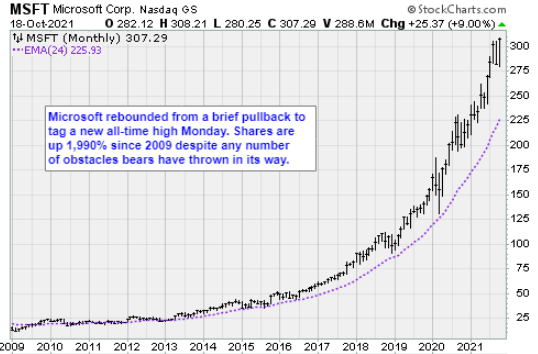 In economic news, we learned that US industrial production fell 1.3% in September, compared with expectations for an increase of 0.1%. "The risk was to the downside, thanks to Hurricane Ida at the start of the month and the cooler-than-usual weather—depressing demand for electricity to drive air-conditioning—but the hit was bigger than we expected," Pantheon Macroeconomics Chief Economist Ian Shepherdson said in a note. "The underlying industrial recovery continues, though its pace has moderated."

China's growth has been weighed down by the resurgence of Covid-19 and a power crunch, Commerzbank analysts said in a research note. In addition, property market concerns had also hit sentiment and investment, they added.

The Organization of Petroleum Exporting Countries and allied producers led by Russia are not showing any signs of boosting output and the US government remains mum on its strategic petroleum reserve releases, Halley said.

In company news, CDW (CDW) said it has agreed to buy Sirius Computer Solutions from a Clayton, Dubilier & Rice affiliate for $2.5 billion in cash. Shares of CDW jumped 4.8%.

Disney (DIS) has delayed its Doctor Strange, Thor: Love and Thunder, and Black Panther sequels as well as Indiana Jones 5, according to Variety. Barclays downgraded Disney's shares to equal-weight from overweight while cutting its price target to $175 from $210. MoffettNathanson also lowered its price objective to $180 from $185 but kept the neutral rating. Shares of Disney fell 3%, the steepest decline in the Dow.