Seven sectors were stronger than SPDR S&P 500 ETF Trust (SPY). Materials (XLB) and Health Care (XLV) were the strongest sectors, while Energy (XLE) and Consumer Discretionary (XLY) were the weakest.

Weekly market breadth was negative for both the NYSE and Nasdaq. The New York Stock Exchange Index (NYSE) had 1607 advances and 1918 declines. Nasdaq had 2163 advances and 2786 declines.

10-Year US Treasury yields rose, closing at 1.453% (Figure 1) and remaining below April’s highs. Support remains between 1.25% and 1.40%. Resistance is between 1.65% and 1.80%. A close above or below resistance is likely to cause volatility in the equity and bond market. Yields remaining in a trading range through the end of the year would be ideal.

ETFs to monitor this week 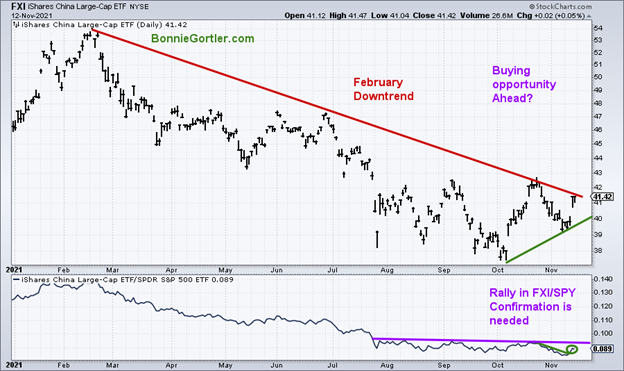 A buying opportunity could be developing. FXI gained 5.29% last week and is close to breaking the February downtrend (red line). I like the pattern of a higher low in the price spread over several weeks, and FXI gaining relative strength compared to the S&P 500 (FXI/SPY).

The relative strength ratio (green line lower chart) has broken its October short-term downtrend. If there is more strength in the FXI/SPY ratio, and it can close over October’s high, more strength is likely.

New lows contracted last week, closing at 41 (blue circle) in a low-risk zone where prices tend to rise. A significant correction is not likely until new lows rise and close above 150 (blue line). 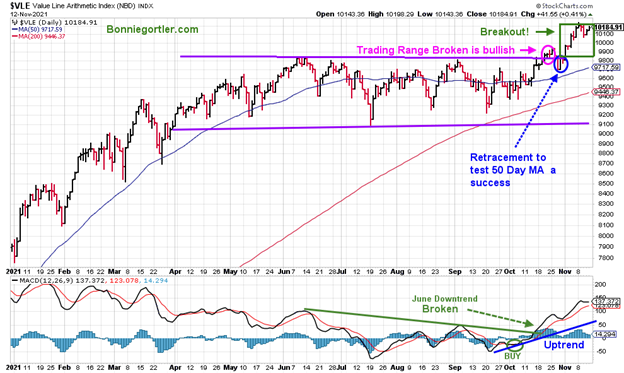 The Value Line Arithmetic Average (VLE) is a mix of approximately 1700 stocks. VLE broke out of its trading range (pink circle) after a successful test of the 50-day moving average at the end of October. VLE rose +0.80% last week as the other major averages fell. As long as VLE remains above the breakout, the likelihood of a deep correction is unlikely. MACD (lower chart), a momentum indicator, gave a buy and then broke the June downtrend, confirming the breakout.

The daily Nasdaq AD-Line failed to get through the June downtrend (purple line) and turned down in September, making lower highs. The Nasdaq AD-Line made a higher low in October, holding above the August lows (orange arrow), and then turned up.

The first week of November, the AD-Line rose sharply to its highest level since 9/2, then turned down, not getting through resistance. The technical pattern is favorable as long as the October uptrend remains intact (blue dotted line).

A close below the October uptrend would signify weakness, and a test of the August lows. 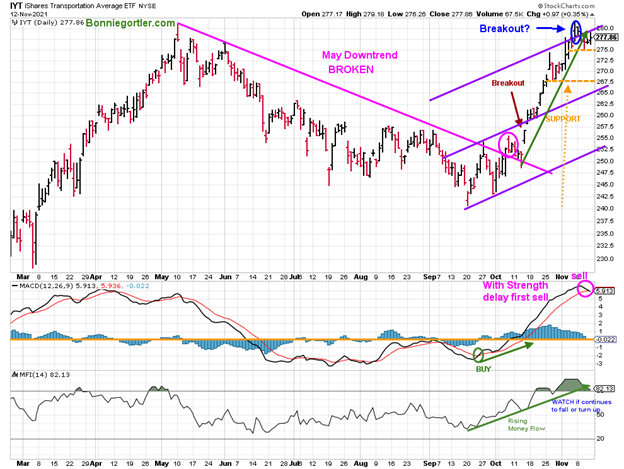 MACD (middle chart) is on a sell. However, since MACD confirmed the price, I recommend delaying the first sell but preparing to take the next sell. Another strategy would be to sell 50% of your investment to lock in your profits and let the balance run.

Money Flow (bottom chart) also confirmed the strength in IYT and has turned down. Continue to watch money flow if IYT begins to weaken. 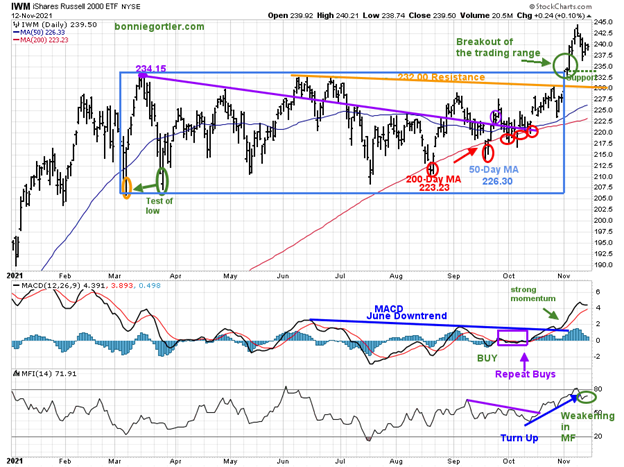 IWM made a low on 3/5, then peaked at 234.15 (purple circle), followed by declines to test the March lows and the March high. There were five penetrations of the 200-day moving average (red circles) within the trading range (blue rectangle). However, none triggered major selling.

MACD (middle chart) broke the early June downtrend (green line). MACD gave repeat buys in August, September, and October, as IWM stayed in the trading range. After breaking out of their trading range, the bulls took a break last week, closing at 239.5, down -0.96%.

MACD and Money Flow (lower chart) weakened but remained positive. With the power of the upside move, the first MACD sell is likely not to be significant. The upside objective remains at 259.00. Support is at 234.00, followed by 230.00, and 225.00.

A rising line means the IWM is stronger, and if falling, the SPY is stronger. IWM has turned up and is now leading in relative strength. If IWM outperforms the S&P 500 (SPY) and gets through resistance this week, the odds favor IWM will outperform the S&P 500 in the near term. With favorable seasonality in effect, I am looking for a breakout through resistance in IWM/SPY ratio sooner than later. 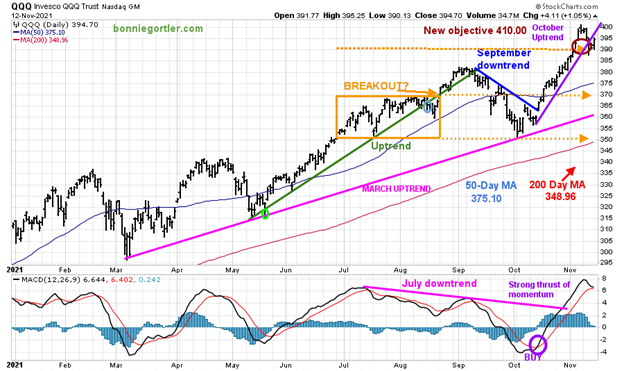 The chart shows the daily Invesco QQQ (QQQ), an exchange-traded fund based on the Nasdaq 100 Index, with its 50-day moving average and 200-day moving average. In June, QQQ was in a trading range (orange rectangle), and then broke out above 370.00 in August, which failed. A decline followed to 350.00 support in late September.

The lower chart is MACD (12, 26, 9), a measure of momentum. MACD gave a timely buy signal. MACD made a new high, a strong thrust of momentum after breaking the July downtrend. Be alert that the first MACD sell is likely not to be a serious correction. A period of consolidation may be necessary. The second sell, when and if it occurs, should be followed. 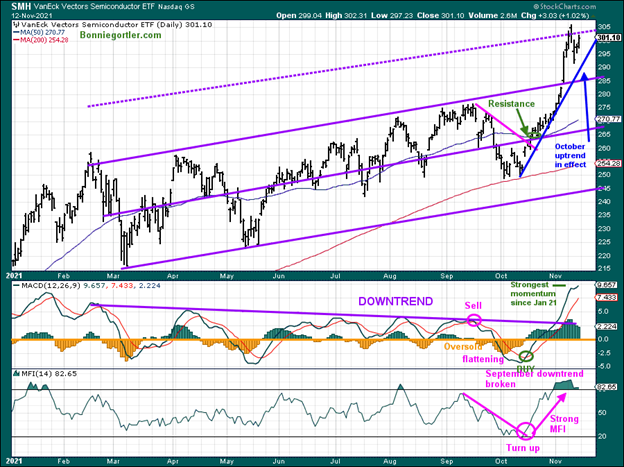 The next objective is 322.00. Support is 296.00, followed by 290.00, and 285.00. MACD (middle chart) remains on a timely buy with momentum accelerating to the upside after breaking the February downtrend (purple line). Money flow (lower chart) remains strong.

This week it would be bullish if SMH continues to lead, stronger than the Nasdaq and S&P 500, while closing above the October uptrend. 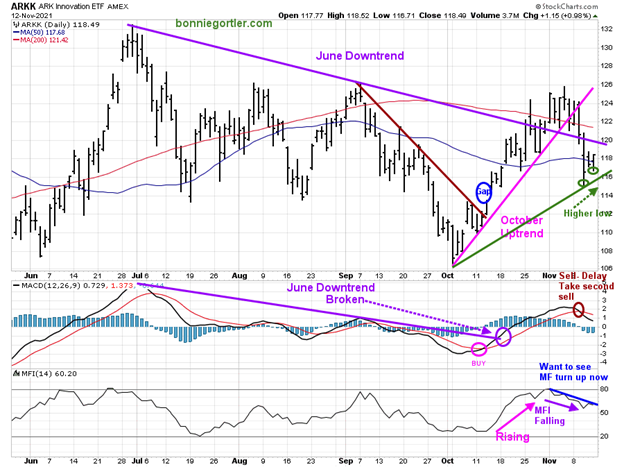 ARKK broke its September short-term downtrend (brown line), gapped up, and then rallied. Last week ARKK had a different story, with ARKK falling -3.11%. ARKK broke below the October uptrend (pink line), but remained above the gap (blue circle), and turned up a positive sign. With a higher low formation developed (green circles), another rally this week is likely.

MACD is on a sell, but MACD made a higher high; it's ok to delay the first sell, but take the second. Money flow (lower chart) is trending down. Watch money flow for a turn-up, and if it breaks the November downtrend, implying another leg up. Support is at 116.00, followed by 114.00. Unless ARKK closes below 114.00, give the bulls the benefit of the doubt.

The Dow, S&P 500, and Nasdaq were lower last week but remained in a solid uptrend. Momentum indicators confirmed the highs, implying there is more upside. Semiconductors continues to lead, which is a positive sign along with the strength in The Value Line Arithmetic Index. A slowdown or consolidation before another advance occurs, to alleviate some of the overbought indicators and optimism. For now, the trend is up. Enjoy the rally, but prepare your plan to protect your gains in case the unexpected materializes.