We Are on the Cusp of Something Serious

I’ve been coming here for months warning about charts coming right to the ledge, but it’s been elusive, and nothing has jumped, explains Jeff Greenblatt of Lucas Wave International.

The major reason for that is stocks have a seasonality of when they like to dive. It’s not they can’t jump overboard the rest of the year; the odds are against it. I’ve studied bear markets as well as crash legs and I think we can all agree the highest probability of such a condition usually materializes from late August thru the end of October.

That we survived this season without a major market calamity is a good thing. But we are not out of the woods. I saw a report the other day that stated Evergrande caught up on their back interest payments. Since then, a slew of articles materialized overnight, which stated their chairman Xu Jiayin sold more than 7 billion yuan ($1.1 billion) worth of personal assets to prop up the company. In other words, Mr. Jiayin sold several personal houses as well as a few private jets to “maintain the basic operations of his huge empire,” according to state-owned China Business News.

Despite all the inflation fears, somehow conditions have managed to stabilize but many have been concerned about the potential of a black-swan-type event. Evergrande may or may not be such an event but I’m more concerned about the calculations on my KBW Nasdaq Bank Index (BKX) chart that have been the leading indicator for trouble with the banks. 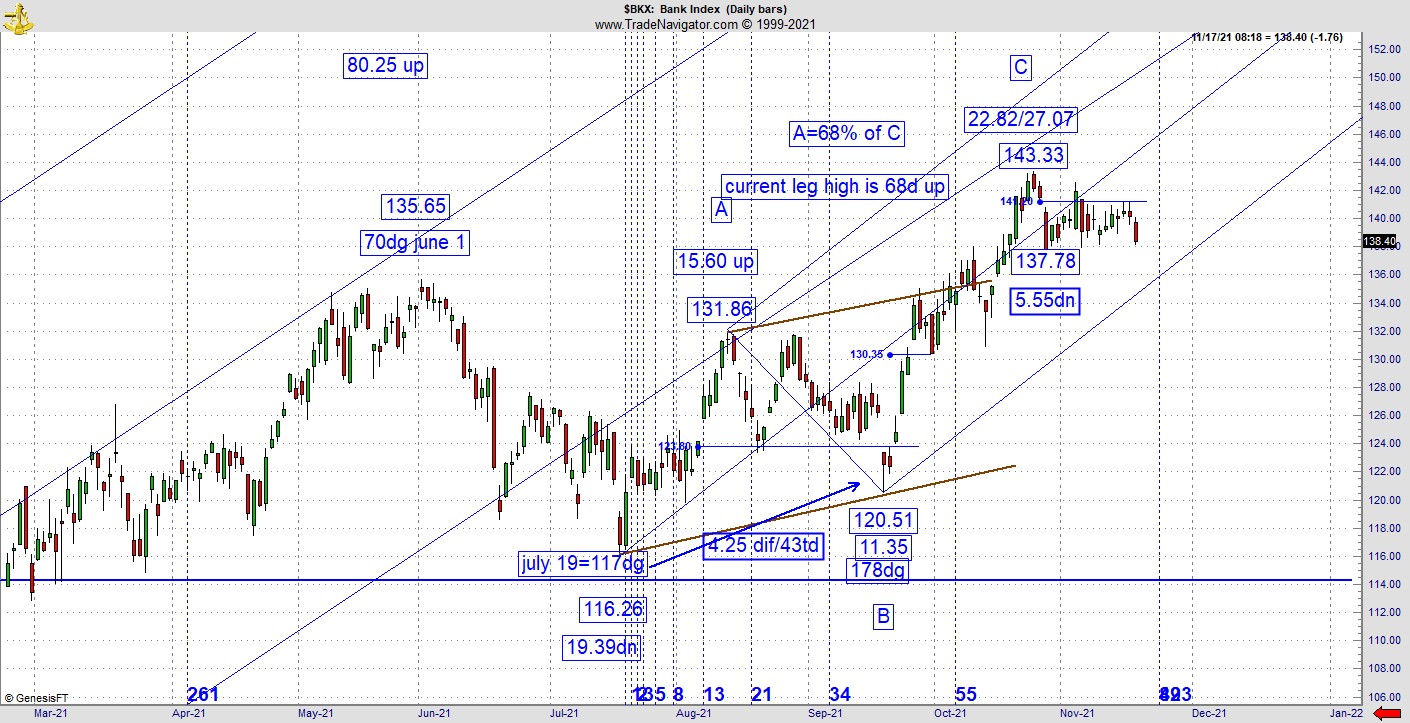 This pattern has been setting up for some time. Recall we previously discussed the wave proportions where the first thrust (A) is 68% of the second major thrust (C). By itself it means nothing but when we consider the high came in at 68 trading days that could turn out to be fairly significant. That high was on October 25, so it looks more and more like the real deal. So, it gapped down, thrusted beyond the gap but short of the high. Now look at the hourly chart. I’ve been teaching on replication for a while now. Do you see how the 55 vibration is the gift bears could be waiting for? There are three key 55 vibrations on this chart right now. 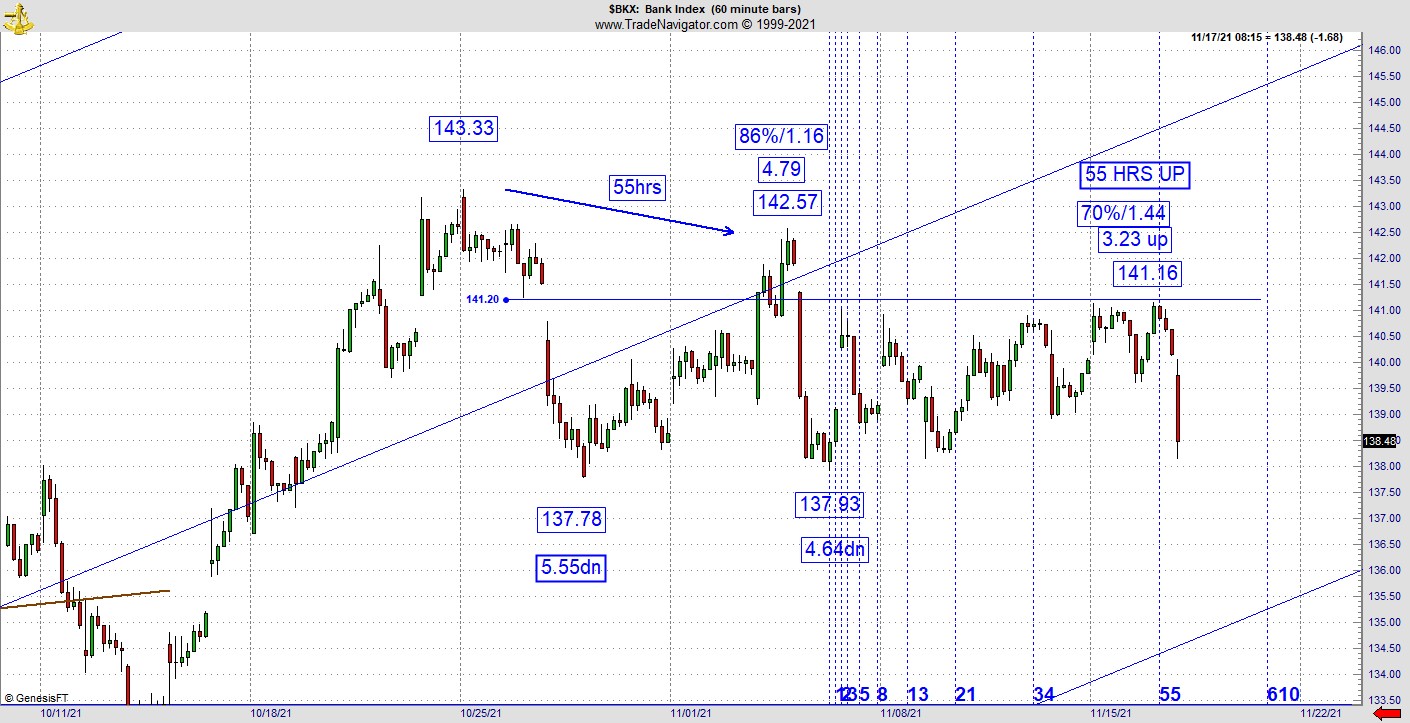 This could’ve been the test of the high many have been looking for. Now it has the potential to create some damage as it tests support. One more distribution day could set it off. The only mitigating factor on the pattern here is if it could somehow trade sideways until it hits the trend line and then have it take off again. Is that going to happen? At this point odds are against it, but Elliotticians might tell us what I’m calling C could still be the top of a third wave, which implies one more thrust attempt to the upside.

On another front we’ve also been tracking the Ten Year, which rolled over on a funky reading tied to the Gann calendar last week. Now its testing support at the point of the 144-day window, which created the bounce leg in the first place. 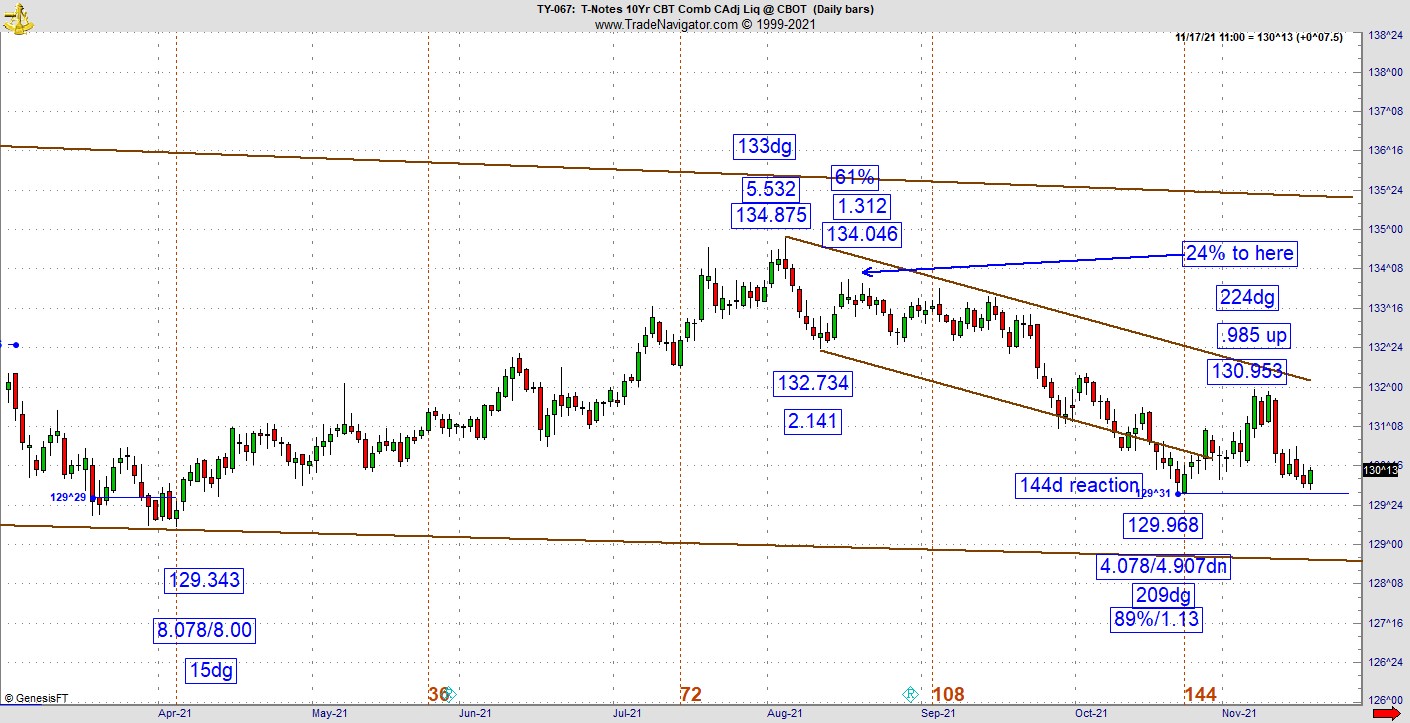 Here’s a few additional thoughts from my discussion last week on the process of becoming a great trader. We used a sports analogy and if you’ve checked the standings, it seems the Rangers have figured out how to close out games. It’s a process of experience and maturity. It grows incrementally and that’s how you need to gauge your progress as a trader. If you find yourself doing the same thing and not seeing the fruits of your labor, it could be time to make changes and even fire the coach.

No, that doesn’t mean firing yourself. It means changing the way you trade and there are many resources to help you right here at the Moneyshow.com. In this business you either invest in yourself or allow the money to go down the black hole.

Look at how professional sports teams draft and develop players. Some do it very well, others not so much. Luck does play a part of it. Who are the two most successful QB’s of this era? There could be debate but Tom Brady and Aaron Rodgers comes to mind. Rodgers was a first round draft pick while Brady was selected in the 6th round. I’m sure you’ve noticed some teams go through a collection of quarterbacks. In Miami, they were willing to tank for Tua and they ended up with him anyway without tanking. So, it’s a year-and-a-half into his development and Miami management was willing to give up on him and trade for another quarterback who is very talented but comes with a slew of legal problems.

Teams that give up on quarterbacks have one of two problems. They either can’t spot talent or have no patience to persevere thru the growing pains. Look at your own history as a trader. What got you motivated enough to attempt trading in the first place? What were the first serious methods you learned? How did you choose them? Are you the kind of person who changes methodologies every six months or have you found something that you’ve continued to refine and improve slowly over time? In my case, I started with Bill Williams' Trading Chaos, I was very fortunate to have found a methodology that works right from the start. But it took a long time to refine and get it right. I’m probably talking to you right now because when the Internet bear squashed 90% of the gains, many of those “day traders” graduated to flipping houses. We know how that turned out. Personally, I stuck with the trading.

From Trading Chaos, I progressed to Elliott Wave, which I stuck with for several years until the Gulf War rally of 2003. From there I branched off on my own and have been developing this chaos/Gann-based methodology you see for a number of years. The point is there are many factors to succeeding at trading, but you have to find a good methodology and have the perseverance to stick with it. As it turned out, Miami didn’t trade for Deshaun Watson, and last week, Tua might have finally shown signs of progress and maturity.