What Is Price Action? 6 Aspects to Consider 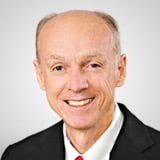 What is price action? There is no widely accepted definition of price action, but I think a broad one is most helpful for traders, states Al Brooks of BrooksTradingCourse.com.

Price action is any representation of the price movement of any financial instrument, on any type of chart, and on any timeframe. Here are some examples: 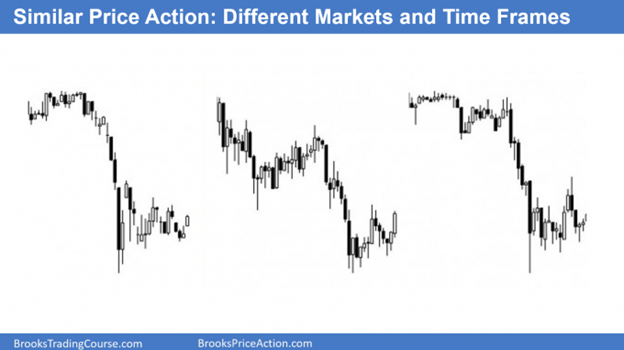 Can you tell which is which? Of course not, and the reason is that the same people and computers are trading all of them. And, they are using the same techniques for all markets and time frames. Each is simply a representation of rational human behavior. (The answer is: the chart on the left is a daily chart of General Electric (GE), the middle chart is a 1-minute chart of the EUR/USD foreign exchange market, and the one on the right is a 5-minute chart of gold.)

Any Type of Chart is Good for Trading

The charts below show that it does not matter what type of chart a trader uses. This is because they all are just different representations of what is taking place in the market. Consequently, traders can see the same price action setups on all of them. 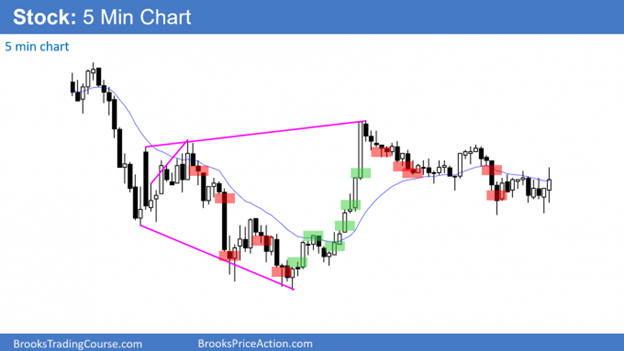 This is a 5-minute chart of a popular stock. 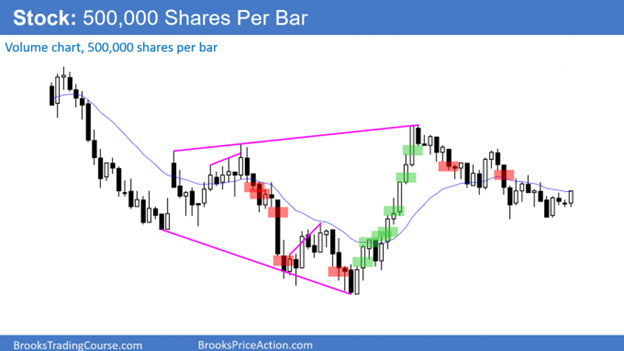 Again, the same stock, but this chart is a volume chart with 300,000 shares per bar. 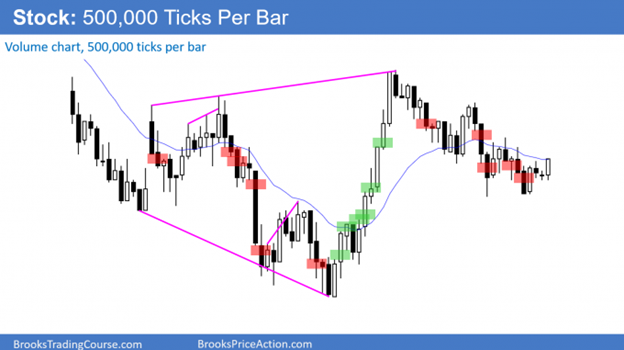 This is another volume chart of the same stock, but based on ticks. There are 500,000 ticks per bar. 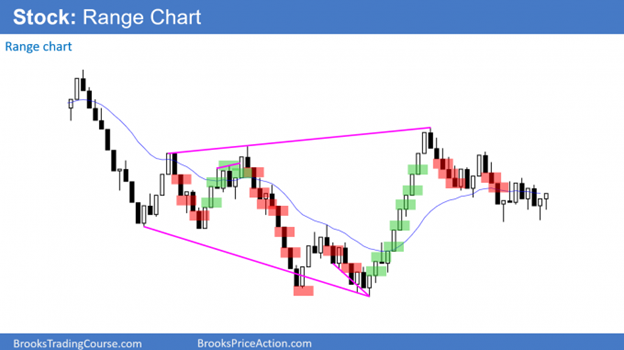 Here is a range chart of the stock. 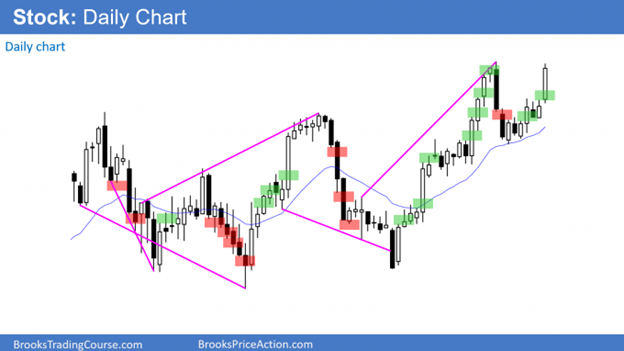 Finally, a daily chart of the stock. Traders look for the same price action setups on every chart. Markets are fractal, which means that the same patterns occur on all smaller and larger time frames.

You sometimes hear traders refer to some movement as noise, as if the market behavior was random. What they do not appreciate is that the market is controlled by hundreds of computers that never rest. They are constantly crunching numbers and executing trades.

The movements are very precise because all of the algorithms are aware of the key prices. These are support and resistance levels, and act as magnets that draw the market to them. Once there, the market then decides on which magnet it will then test, and the move can be up or down.

Every Tick is an Example of Price Action

What is price action? Every little move is an example of price action, and traders never dismiss anything as unimportant. Sometimes, something very small leads to a big move. Traders who understand what is going on will often take these trades. The stop is sometimes very tight, which means that the risk is small. Small risk always means low probability, but the reward can be so large that it more than offsets that low probability. 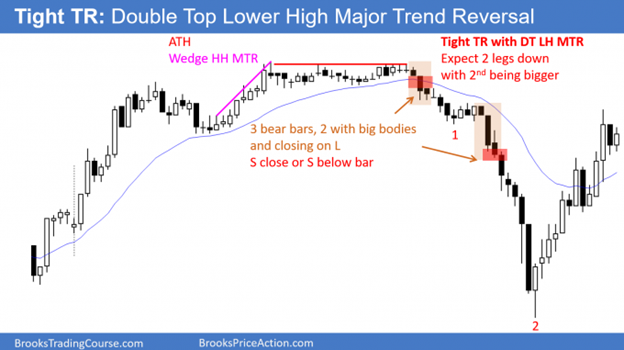 Tight trading range has a double top and it is slightly below the high of the bull trend. Small things often lead to big moves.

Alert traders shorted one tick below the signal bar, risking five ticks to make a reward that was many times larger. After the market began to trend down, the probability of lower prices increased, and many traders waited to take later entries. You can see the big bear trend bar that formed. This is a sign that everyone agreed that the bears had won and that the market was going lower.

Price Action Is a Reflection of Human Behavior

All of us have a good understanding of how to buy and sell things, and how to determine a fair price. We do it every time we buy something at the store or sell something to someone. Our behavior is logical, and it is a survival skill, and humans have optimized it over thousands of years. We do it very well.

Markets are simply forums for buying and selling. They are entirely controlled by rational human behavior, which is in turn controlled by our genes. This means that price action has been the same since markets began. Furthermore, it will remain the same unless we evolve into a new species.

Computers make decisions faster than we do, but ultimately, they come to the same logical decisions as us. This means that price action has not changed, even though 75% of the trading is now automated. 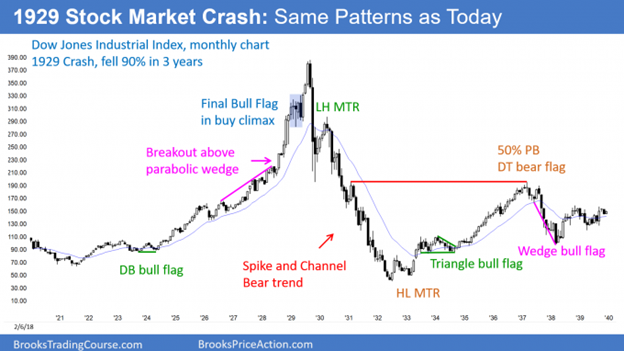 This is a monthly chart of the Dow Jones Industrial Average during the Great Depression. There were no computers at the time, but the chart still looks the same as any chart today, on any time frame.

Trading is difficult. As every beginning trader soon discovers, making money as a trader is much more difficult than websites, books, and ads make it seem. However, it is not impossible.

Although trading is not a zero sum game in the long run because the economy has grown forever, the total dollars in the stock market today are about 10 times more than during the 1987 crash. There is vastly more wealth today. It is essentially a zero sum game over the course of the next several weeks.

There will always be traders who are better than others, and they will consistently make money. That should be the goal of every trader. Learn to trade consistently well. We do not have to trade perfectly, but we do have to trade well. That is something within reach of all of us.

However, to do anything consistently well for many years is always difficult, but the challenge is part of the appeal. That is why we play tennis or golf, or watch soccer or football. We like to compete.

The Lure of Candlesticks & Indicators

People are naturally hopeful. We want to believe that the world is good and fair. Also, we want to believe that we will succeed in whatever we are doing. The trading world is filled with websites, videos, and books that make trading sound easy. The message is clear. All you have to do is just memorize a dozen candle patterns or use a secret indicator and you will get rich.

Traders quickly learn that this is untrue. They discover that the only way that they will succeed is by working very hard to understand how markets behave. There are no secrets. Everything is right in front of them. Covering it all up with indicators only reduces their chances of success. 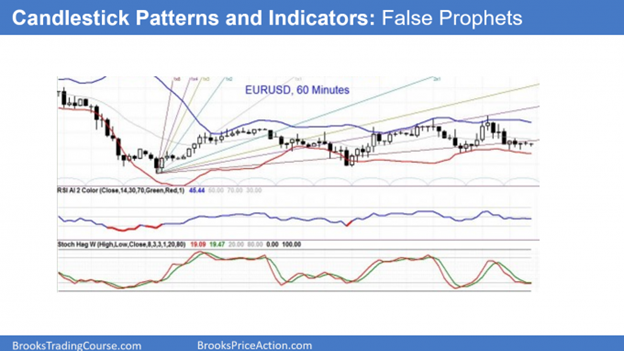 Too many indicators make you anxious. They do not make you money.

Above is a EURUSD 60-minute forex chart with many indicators, which make it very difficult to see the price action. Beginners are often afraid of the market and try to hide it with lots of indicators.

Yes, the beginner is comforted by having a psychological barrier between himself and the market. But rather than protecting him from the dangers of the market, the barrier prevents him from seeing what the market is doing. He is therefore unable to trade profitably. 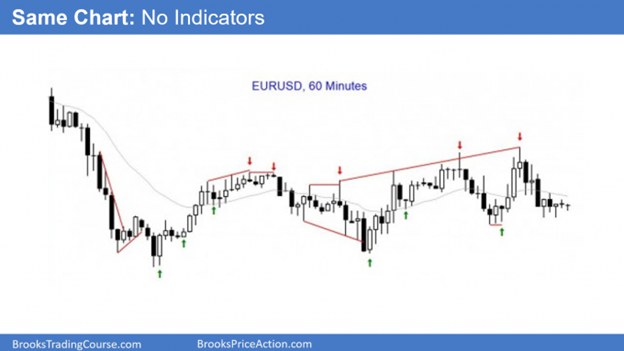 This is the same 60-minute EURUSD forex market chart without indicators. It is easy to see what the market is trying to tell traders if they are willing to listen.

If not candlesticks or indicators, then what is price action?

Traders correctly believe that Goldman Sachs, high-frequency trading firms, and hedge funds make a fortune. However, they are not using candlestick patterns and indicators to do so. So, what do successful traders do instead?

Carefully listen to technical traders on CNBC. They tell you every day! They repeatedly talk about support, resistance, channels, momentum, prior highs and lows, and trend lines. You rarely ever hear anyone mention a candle pattern or an indicator.

They also talk about whether a trend is strong, or if the market is in a trading range. In addition, they mention higher highs and higher lows in a bull trend, and lower highs and lower lows in a bear trend. Also, they assess buying and selling pressure, probability, risk, and reward. Finally, they often talk about trade management, like where to put stops and when to take profits.

Examples of Support and Resistance 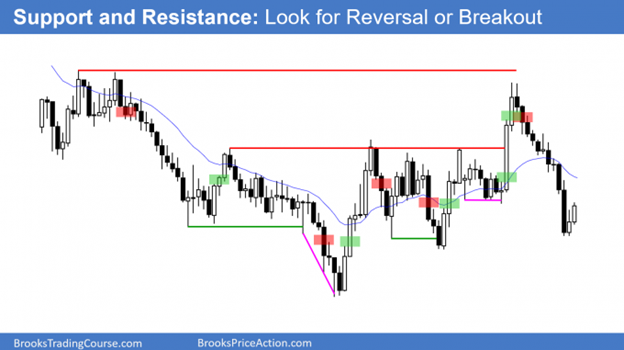 Traders are always thinking in terms of support and resistance. This means that as soon as they see two reversals, they draw a line and then watch what the market does when it tests the line again. They also see if the market reverses down when it tests a prior high, as it did here. 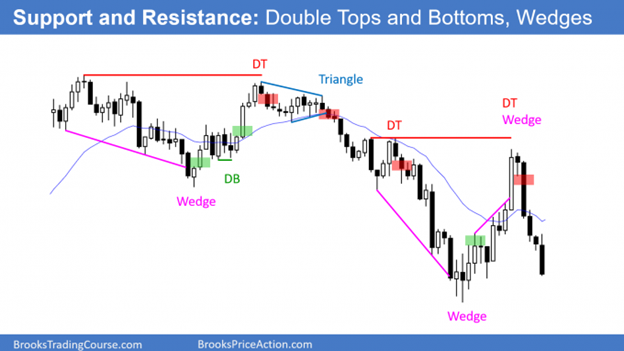 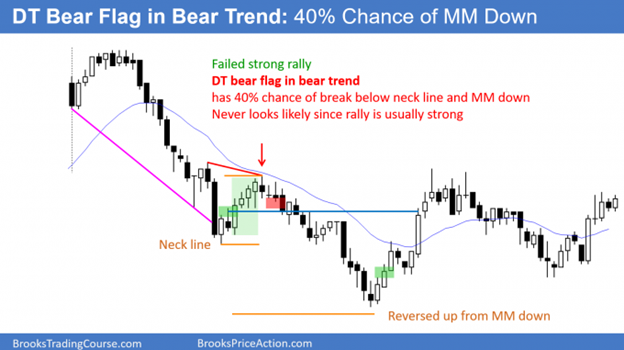 Many traders do not think of this pattern as a double top bear flag, but it is common and reliable. Double tops and bottoms are rarely perfect, and often look very different from how they are usually described in books and websites. 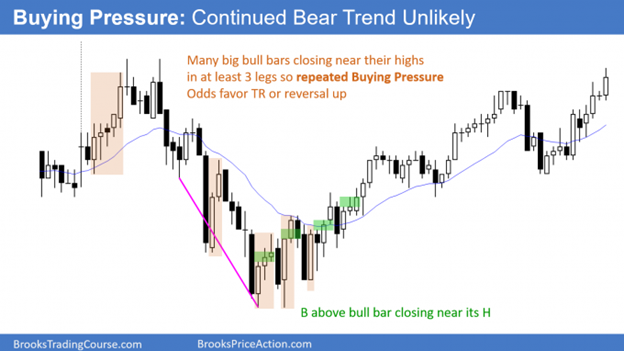 Many traders often incorrectly refer to these charts as price charts, which is only half correct. They are two dimensional, which means that they have a second variable, which is time. These are price versus time charts, and time is often more important than price. If the market begins to have a series of trend bars in one direction, it is a sign that one side is winning and that a trend might soon become obvious.

Traders focus on the current bar. They then hope to figure out what the bars just off the screen to the right will look like. As everyone knows, the best predictor of tomorrow’s weather is what is happening today. Well, the same is true with trading. The bars to the right that we do not yet see probably will look like those to the left.

The market is constantly testing the strength of traders who hold the opposite view. It knows that eventually, they will be right. Successful traders know that traders betting against inertia will be wrong 80% of the time.

They therefore like to bet against those other traders and buy reversal attempts in bull trends. Betting that they will become bull flags. Furthermore, they sell bottoms in bears, betting they will become bear flags. They also buy low, sell high, and scalp in a trading range. Here, they are betting that all of those strong rallies and selloffs will fail and then reverse.

There is nothing magical to trading, and the institutions cannot hide what they do. It is all right in front of all of us every day and on every chart. This is called price action. What is price action? It is the key to successful trading.

However, trading well takes much more work than simply memorizing a handful of candle patterns or relying on a secret indicator. But, if a trader takes his job seriously and works very hard to learn his craft, the reward can be everything that he hoped it could be.