The Market Is Sending a Loud, Clear Signal That Oil Prices Are Headed Higher

Back in September I suggested it looked like the oil price was getting ready to break out of its long-term downtrend. Shortly afterwards, it did just that, breaking out before falling back to test the breakout level, recalls Jesse Felder of The Felder Report.

“When you get a range expansion, the market is sending you a very loud, clear signal that the market is getting ready to move in the direction of that expansion.” —Paul Tudor Jones

If Paul Tudor Jones is correct, this expansion of the long-term range in oil prices heralds a much larger move higher. What’s more, the fundamentals of simple supply and demand would seem to confirm that thesis. 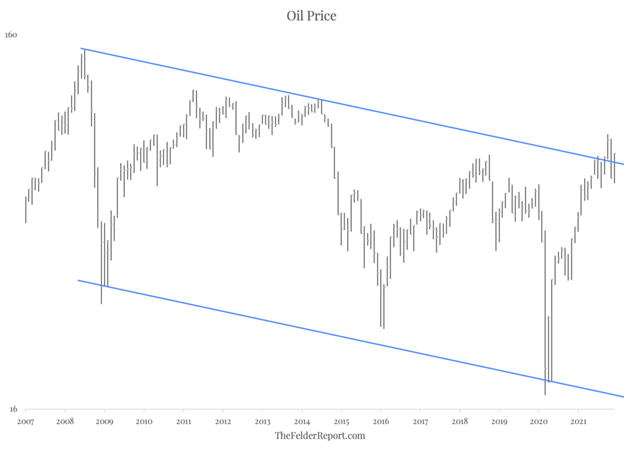 In reaction to the strong rally in oil prices last year, energy stocks were the best-performing sector in the S&P 500 Index (SPX). But you wouldn’t really know it by looking at the chart below. If oil prices are, in fact, headed even higher, the relative performance of the energy sector has only just begun to reflect this bullish trend. And it’s still early, but so far, things are off to a pretty stellar start for the sector this year.

Of course, reversion in this relative performance metric can come one of two ways: Either energy stocks can outperform to the upside (during a continued uptrend for the S&P 500) or they can outperform to the downside (during a bear market in the index). Either way, the energy sector probably has a long way to go yet before this nascent bull market is over, no matter what ESG has to say about it.