The Federal Reserve has upped the ante on fighting inflation, which has jumped to 40-year highs, states Marvin Appel of Signalert Asset Management.

We already knew that in 2022, they will wind down quantitative easing and raise the Fed funds rate more quickly than originally contemplated last year. Now, from the just-released minutes of the December FOMC meeting, we saw that some members are looking not only to end quantitative easing but to reverse it (known as reducing the size of the Fed’s balance sheet).

The December employment report was inconsistent but mainly reflects a continuing strong labor market. The survey of business showed 199,000 jobs added, which is far less than was expected. (In normal times, 199,000 jobs created would be a strong report.) On the other hand, a survey of workers’ households showed a stronger jump in employment than the business survey suggests. The unemployment rate fell to 3.9%, which is close to its 50-year low of 3.5% in early 2020. Wages jumped 0.6% for the month, up 4.7% for the year—big gains, but still lower than inflation. Job openings have barely budged since getting above 10 million, a record. Overall, this is a good time to be looking for a job.

10-year Treasury note yields rose on the news, and the ETF holding Treasury Inflation-Protected Securities (TIP) held up better than an ETF with nominal Treasury notes. This suggests that the bond market considers the report a harbinger of continued inflationary pressures. However, the breakeven inflation rates that would make TIPS and nominal Treasury note have the same total returns remains below their November 15 peak for both five and ten-year notes. Current inflation expectations are 2.77% over the next five years (versus a peak of 3.17%) and 2.46% over the next ten (versus a peak of 2.76%). This suggests that the markets expect the Federal Reserve to be successful in containing inflation in the years to come.

When the economy is shaky and yields are low, investors are willing to pay top dollar for growth companies (such as large-cap technology) that can maintain their earnings. But when the economy is expanding and interest rates are rising, earnings stability becomes less important, so investors take profits and rotate into more economically sensitive companies (value stocks) where it is cheaper to purchase a dollar of earnings. That has happened so far in 2022.

The chart below shows the ratio of large-cap value (IWD) to large-cap growth (IWF) in the bottom half, and the 10-year Treasury note index in the top half. Both of these indicators should rise when economic growth and/or inflation expectations are rising. The circled areas show that this is what has occurred in 2022.

The market situation to me seems reminiscent of 2018, which is the last time we experienced a Fed tightening cycle. In a setting of inflation and rising interest rates, you should stay diversified in your stock selections or overweight value. Do not overweight growth stocks, which have gotten almost as far ahead of value as they were at the peak of the dot com bubble in 2000 (see chart below). In fact, it looks to me like this is a time to take profits in large-cap growth. One area to overweight is consumer staples, a defensive sector that usually holds up better than the broad market during major market declines.

This environment is looking good for floating rate bond funds. These funds’ yields rise when the Fed raises the Fed funds rate, benefitting investors in a climate where most other types of bonds face headwinds. 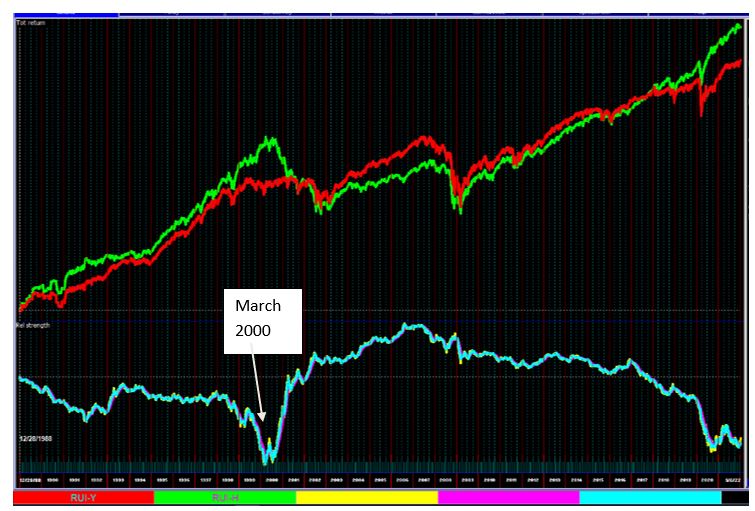 Figure: Total return of the Russell 1000 Value Index (large-cap value, red) and the Russell 1000 Growth Index (large-cap growth, green) from 1989-2022. The light blue line at the bottom is the ratio of value / growth: rising means that value is stronger and falling means that growth is stronger. Growth is ahead of value by a margin close to what we saw at the peak of the tech bubble in March 2000, suggesting to me that the market is due for a period of reversion where value should outperform growth.