A question you should be in the habit of asking is, “What does the stock price currently discount?” states Jesse Felder of The Felder Report.

“To achieve superior investment results, you have to hold non-consensus views regarding value, and they have to be accurate.” —Howard Marks

Understanding what is already priced in and what is not yet priced in is key to the investing process, and the history of Apple’s (AAPL) share price over the past decade is a good representation of how this works.

Back in 2013, when Apple traded at just five-times free cash flow the consensus was, in the wake of Steve Jobs’ passing, the company could no longer innovate. Worse than that, the stock price appeared to discount worsening profitability and a persistent loss of smartphone market share to Samsung.

Fast forward nearly a decade and, at 35-times free cash flow, investors now believe that, not only will Apple dominate smartphone sales and services for the foreseeable future, it will also come to dominate autonomous driving and even the metaverse in the years to come. 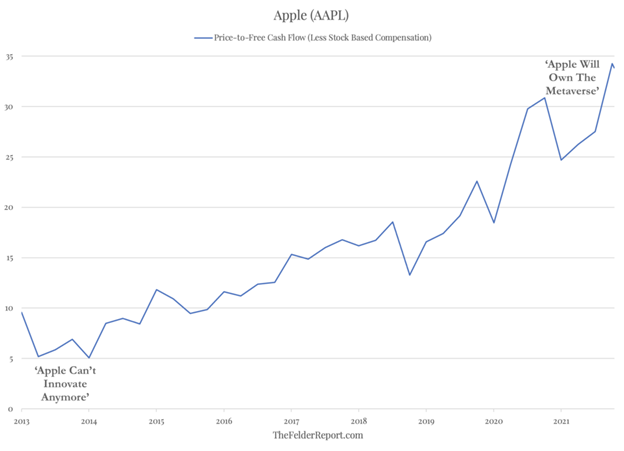 Today, however, Apple shares have priced in a heroically optimistic view of the company’s future. Even if it comes to pass, investors may not benefit much as the shares have likely already discounted it. Should these hopeful projections prove too hopeful, however, the non-consensus bearish view regarding the company’s value may prove prescient.