The stock market decline continues in 2022, its worst week since October of 2020, states Bonnie Gortler of bonniegortler.com.

None of the eleven sectors rose, with three sectors performing worse than the SPDR S&P 500 ETF Trust (SPY) -5.75%. Defensive sectors Utilities (XLU) and Consumer Staples (XLP) held up the best, while Technology and Consumer Discretionary (XLY) were hit the hardest.

China (FXI) had a small gain, and Emerging Markets (EEM) are improving in relative strength compared to the S&P 500. On the other hand, Investors gave up on Small Caps, and they lost their love for Semiconductors.

The CNBC Fear and Greed Index the previous week was at 58, showing greed. The index now shows fear closing at 43, not yet at an extreme level of fear. However, before there is a bottom in the major average, the Fear and Greed Index is likely to go to extreme fear, but it doesn’t have to.

On an ugly day on Wall Street, investors dumped stocks and prices plunged as options expiration accentuated the decline on 1/21/22. Both international and US markets were under heavy selling pressure falling over 1%. There was heavy volume on the Nasdaq and NYSE, including record volume in QQQ Trust, more than any stock and other Exchange Traded Funds (ETFs).

Watching new lows on the New York Stock Exchange is a simple technical tool that helps awareness about the immediate trend's direction. New lows have been warning of a potential sharp pullback, high volatility, and “panic selling” in the near term for most of 2022 closing above 150.

Learn more about the significance of new lows in my book, Journey to Wealth, published on Amazon. Here is an excerpt, "If the new lows are above 50, it is an alert or warning of possible market weakness or a change in market tone. Be aware it's a good idea to make sure you are happy and comfortable with your portfolio. It is best not to have more volatile investments than you can handle where you feel uncomfortable. If the selling continues, you could have serious losses if the market falls further. When new lows are above 150, the market is negative, higher risk, selling is taking place. Sometimes it could be severe, and sometimes on a very nasty day, you can have 'panic selling,' and big wild swings (high volatility) to the downside may occur."

Last week, during the sell-off, volatility rose, and new lows accelerated above the old 11/30 previous peak of 280, closing at 525 (red circle).

If new lows remain above 150, it will signify caution, and the decline has more to go. On the other hand, if new lows on the NYSE begin to contract below 150 and ultimately between 25 and 50, it will imply a short-term bottom is imminent. For now, the risk is high, and expect elevated intraday volatility.

The daily Nasdaq AD-Line broke the June downtrend (purple line), peaking in November 2021, and then turned down, breaking the October uptrend (blue dotted line). Then the August uptrend (orange line), an advanced warning a decline was forthcoming. The first downtrend was broken (green line) in late December 2021 but failed to gain enough strength to break the November downtrend (blue line).

Market breadth continues to be weak in 2022. The daily AD-Line accelerated down, making another new low (red circle), with no sign yet of a bottom. More time is needed to imply the correction is over. 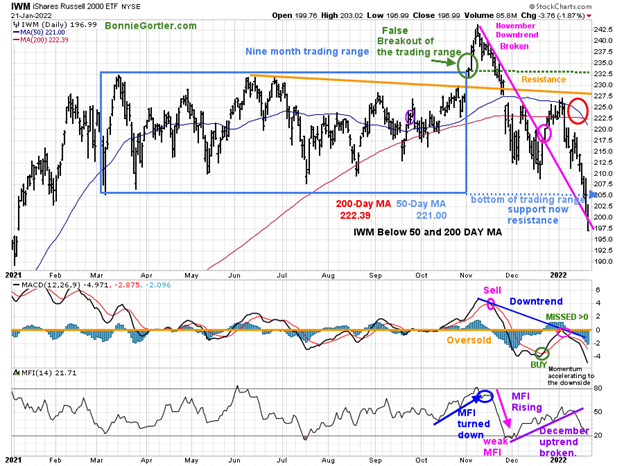 The top portion of the chart is the daily iShares Russell 2000 Index ETF (IWM), the benchmark for small-cap stocks, with a 50-day moving average (MA) (blue line) and 200-day moving average, that traders watch and use to define trends. A false breakout occurred in November in IWM after being in a nine-month trading range. IWM broke the November downtrend but could not get above resistance and turned lower.

Money Flow (lower chart) continued to fall after the December uptrend was broken. High risk remains until at least MACD stops falling and begins to flatten and Money Flow turns up. 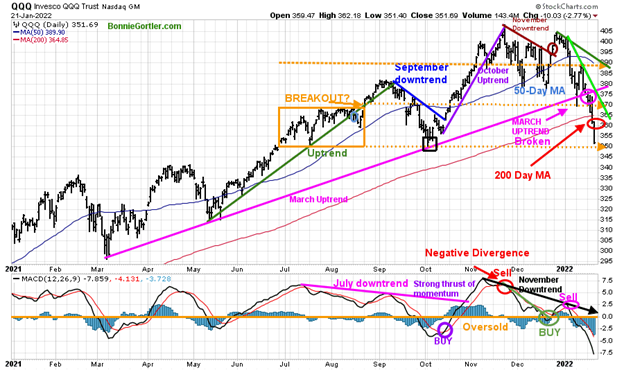 The chart shows the daily Invesco QQQ (QQQ), an exchange-traded fund based on the Nasdaq 100 Index with its 50-day moving average and 200-day moving average. In June, QQQ was in a trading range (orange rectangle), followed by a breakout that failed in late September.

After breaking the short-term downtrend (blue line), QQQ rallied in October and continued to climb in November, barely missing its upside target of 410.00 on 11/22 with a high of 408.71 before reversing lower. In December, QQQ failed to make a new high and broke down below the first support at 390.00, and below the 50-day moving average (blue circle).

Last week, QQQ trend shifted to down after closing below the March uptrend (pink line) at 351.69, down -7.45%. QQQ penetrated key support (mentioned in the update 1/14/22) at 370.00 that needed to hold and accelerated lower on heavy volume.

The lower chart is MACD (12, 26, 9), a measure of momentum. MACD flipped to a sell the first week of January (pink circle) remains in a downtrend and falling (black line).

There are no signs of diminishing momentum, with MACD making a lower low than in December. On the other hand, MACD is the most oversold since 2021, implying a short-term rally is likely to alleviate the oversold condition. However, risk is high until MACD begins to flatten. 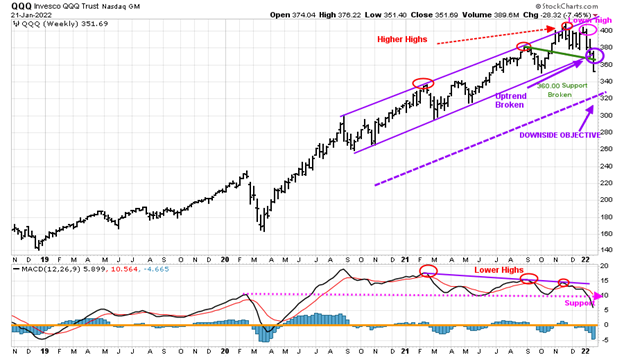 The top chart shows the weekly Invesco QQQ Trust making higher highs peaking in November (red circles) but failed to make a new high in December and then turned down.
Last week the intermediate uptrend since September 2020 was broken (green line), and the intermediate trend is now down. QQQ fell below support at 370.00, and selling accelerated; the downside objective is 320.00 (lower channel).

MACD (middle chart) remains on a sell, falling, and is oversold below zero. Money flow (lower chart) remains in a downtrend (green line) and oversold in the same area as in October. A turn up in Money Flow and MACD breaking the downtrend together would be a positive sign of a potential rally in SMH.

The NYSE A/D line made a new high on 11/8/21. In December, the AD line broke the November downtrend (brown line) and is no longer rising, and it did not make a new high. Without a new high in the AD Line soon, this would be a warning of a pending correction forthcoming in the NYSE. The lows made in July, August, September, and December (blue circles) did not hold, warning further correction may be ahead. 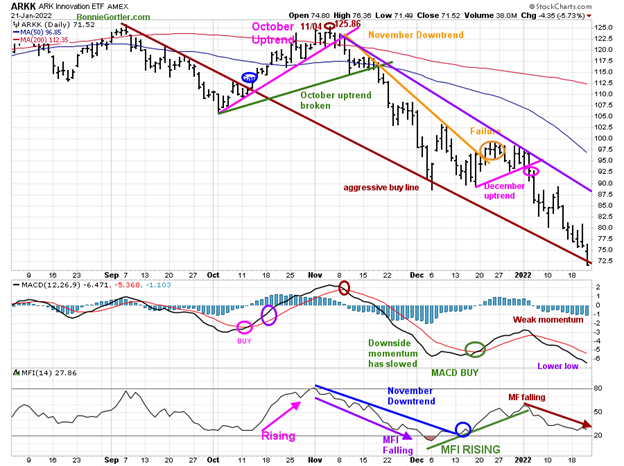 ARK Innovation ETF (ARKK) is an actively managed ETF by Cathie Wood that seeks long-term growth and is highly volatile. ARKK broke its September short-term downtrend (brown line) in October and gapped up (blue circle), followed by a failed rally peaking at 125.86 on 11/04. Once ARKK fell below support at 94.00, it broke through the December uptrend (pink line). ARKK continues to accelerate lower, falling again down -10.87% last week, closing at 71.52. ARKK is worth watching to see if ARKK stabilizes and begins to rise, having successive positive closes as a sign that traders are stepping into buying growth stocks.

MACD remains on a buy because MACD never made it above zero, implying weak momentum. This week, a lower low, taking away the potential positive divergence. 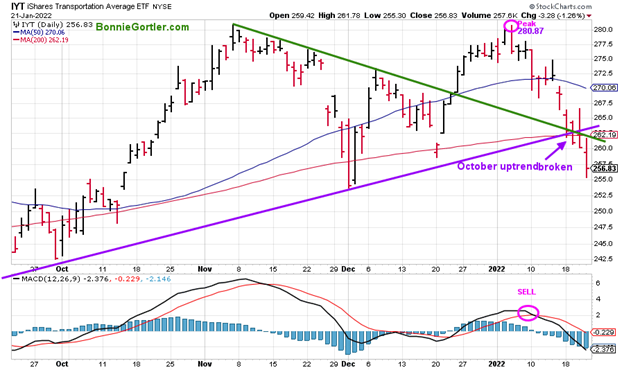 All major averages were down sharply as the decline accelerated and broadened on increased daily volatility. Market breadth on both the NYSE and Nasdaq continues to be concerning. Support levels broke, shifting the intermediate trend to down, joining the short-term trend. Expect high volatility with momentum oscillators continuing to make lower lows, no sign of a bottom yet. However, with market sentiment showing fear and short-term momentum oscillators very oversold, be alert to a short-term bounce that could begin at any time. Risk is high with the bears in control until the bulls come out of hiding, decide prices have fallen enough, and decide to go bargain hunting on a shopping spree. Remember to manage your risk, and your wealth will grow.