US Dollar Index hits a new 20-year high, but the Dollar’s rise against the Yuan brings the most pain, states Bill Baruch, president of BlueLineFutures.com.

USD/CNH (USD/CNH) traded at its highest level since October 2020, adding 2% in May on the heels of a 4.48% rise in April. China Trade Balance was stable in US Dollar terms but bludgeoned in Yuan terms. Exports at 3.9% YoY, lowest since June 2020. 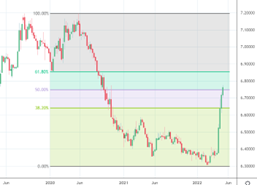 China’s imports from Russia surged by 56.6%. China tightens lockdowns in Shanghai as President Xi doubles down again on zero-virus policy while mass testing in Beijing continues after 50 new cases. Testing in dozens of other cities to follow suit.

People’s Bank of China said it “will not resort to flood-like stimulus”, although they pledged to step up policy support. These comments led last leg lower in risk assets at 4:30 am CT due to mounting expectations of a swift and broad supportive move. China is driving prices lower and exporting deflation. They want to buy advantageously and will not support markets until they are ready to open from lockdowns.

China also knows lockdowns stoke inflation and bring pain to the west. Russia Victory Day and Putin's speech did not help sentiment. Friday’s Nonfarm Payrolls report was good and goldilocks of sorts, but little matters when the risk-off pendulum is swinging, and the Fed’s hands are tied. Do not miss our Midday Market Minute from Friday discussing payrolls and how crucial it was for S&P 500 (SPX) to trade out above the 4150 area.

US ten-year yield hits a high of 3.20% after breaking out above the 2011 trend line last week. 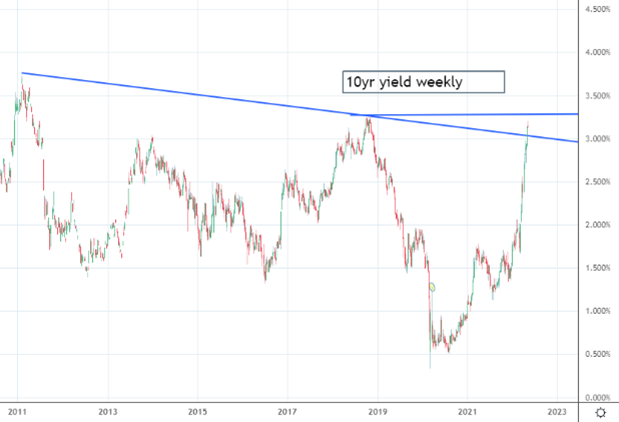 NQ trades 26.4% from the record at the early session low of 12,343.75, the lowest since March ninth, 2021. Some institutional capitulation set in last Thursday and has carried into headlines this morning: Ford sells 8 of 102 million Rivian shares. Another large block of 12-13 million for sale is thought to be Amazon. Atlanta Fed President Bostic said does not see the need for more than 50-bps hikes and Fed needs to be in the neutral range of 2-2.5% by end of 2023. Minneapolis Fed President Kashkari said he is confident Fed will get inflation back to the 2% target.

This leads to a big CPI read on Wednesday. Expectations are for Core CPI to cool to back 6.0% YoY as April base comparison rises, and +0.4% MoM.

A relief in Treasuries should help buoy risk assets. Last week, we described our measured downside as evolving given the ping last Monday and dramatic failure from Wednesday’s close. Rare major four-star support still stands at 4010-4030. More specifically, 4010 is the closing gap from April first, 2020. If this level is violated, we have key support levels detailed below. March 2021 lows in NQ bring major three-star support at 12,207-12,282.

Pivot and point of balance for S&P are last week’s lows of 4056-4062; must regain and hold above here to stabilize.

Continued strength in the US Dollar and weakness in the Chinese Yuan as well as the risk-off landscape has weighed on Crude. Fears of ongoing China lockdowns bring demand destruction. China’s Crude imports hit a three-month high at 10.51 mbpd. 20% jump in Russian shipments, versus 10.06 in March and 9.82 YoY. Russian production stabilized from a drop in April. Major three-star resistance at 111.06 held perfectly through last week.

As noted in each section above, the Chinese Yuan's weakness versus the US Dollar is bringing blunt force trauma to the metals complex. US Dollar Index and rates off overnight highs and helping buoy Gold and Silver. Silver plunged to a low of 21.66, testing the December low and our recurring rare major four-star support at 21.22-21.50. Has pinged 22.00 in the rebound.