An Energy Crisis Is in the Making

It is having a major impact on the global supply of fossil fuels. The sanctions and widening embargo against Russian oil exports is the equivalent of losing Saudi Arabia or the United States in terms of production. The repelling of a major oil supplier like Russia as a source to the global oil market can’t be replaced or made up, meaning the embargo against Russian oil and refined products puts the current market for supply in a bad place, and that is why crude prices are surging again.

The emergence of the global economy from the widespread impact of the pandemic is resulting in a strong rebound in marine freight, rail freight, air freight, truck transport, more consumer driving, and more travel. However, with Russian oil no longer a preferred source due to its war against Ukraine, the situation is severely impacting the calculus of the global transport markets.

At this juncture, there is no end to the supply shortage in sight. As Europe moves to a full embargo, including Hungary and all the members of the European Union, Eastern European countries have to go to global markets to replace Russian oil, but there simply is too little supply.

The Biden administration is more behind the oil supply curve than the Fed is behind the inflation curve. Not until WTI crude hit $120/bbl did President Biden announce the largest ever release of oil from the Strategic Petroleum Reserve to supply the market with an additional one million barrels of oil per day for the next six months. The initial sale of 30 million barrels was hugely oversubscribed, with bids coming in for over 76 million barrels, according to the US Department of Energy. This bid-to-cover sale of better than 2.5x of supply available sent a strong signal to the market that dumping strategic reserves is only a temporary fix.

The oil futures market operates on three mechanisms, readily available supply, the outlook for future supply and sentiment. To put this three-legged equation into perspective, the United States and the International Energy Agency are supplying the market with an extra one to two million barrels per day. It is estimated the world uses 88 million barrels per day, and that’s without any major disruption in supplying the market.

This past week, the Biden administration canceled any new oil and gas lease sales to the Gulf of Mexico and Alaska, dealing a blow to future domestic production as gas prices hit new highs. There seems to be no end in sight to the constant attacks on the US oil and gas industry. The Biden administration and Congress are not managing the transition to renewable energy well at all. As long as the government is going to be inhospitable to energy companies, prices will keep climbing.

The world’s economies need more fossil fuels to not just satisfy current demand but avert a crisis that is already unfolding in Europe with the growing potential of a supply crisis in the United States—as crazy as that might sound. American refiners are under long-term contracts to export vast amounts of refined gasoline, diesel, jet fuel, and lubricants to developed and emerging markets, which could result in rising deficits for these same products here at home.

As to Saudi Arabia and other OPEC nations, collectively they might bring another one million barrels per day to the market, but the Saudis are not picking up the phone when Joe Biden calls. It seems his lack of support to the Saudis in their ongoing conflicts in Yemen and the multiple legal suits brought against Crown Prince Mohamed bin Salman that include charges he ordered the murder of journalist Jamal Khashoggi in 2018 are a no-go for any future increase in production.

Both China and India are buying the majority of Russian oil at a discount, enabling Russia to maintain economic oxygen. It appears as if the only way to see any price relief in the energy markets is if Vladimir Putin is removed from office. Such an event would likely trigger a $20-30 sell-off in crude prices. As far-fetched as that seems, it looks to be the only major catalyst to reverse the solid uptrend for further increases in oil and gas prices.

Instead, investors seeking inflation-friendly growth and income for their portfolios should remain weighted in the energy sector. As WTI crude closed up to $110/bbl. as of Friday’s close, the refining companies are in an even more profitable position, as the crack spread between what they pay for crude and what they sell refined products for is very wide. By comparison, the refiners are realizing profits as if they were oil-producing companies selling crude in a market where prices are $250-350 per barrel. 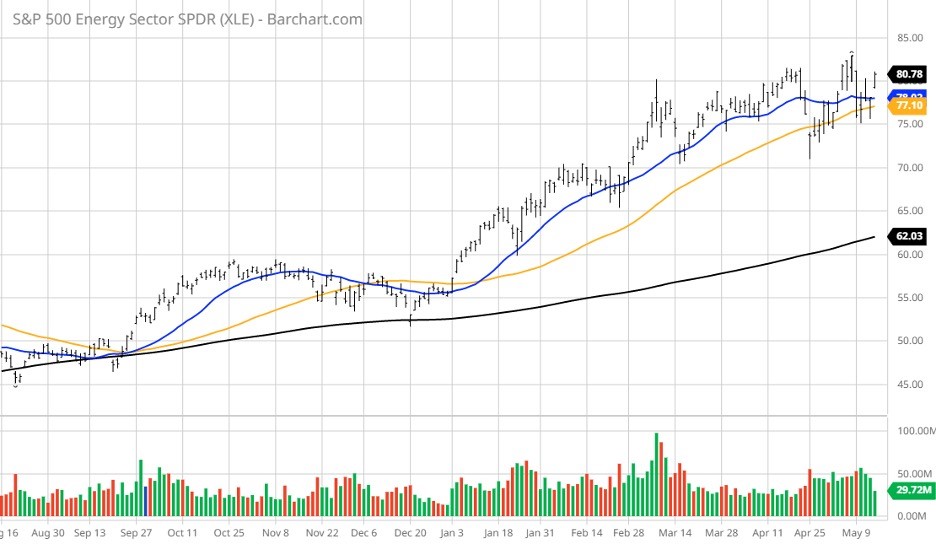 Back in early 2020, the energy sector, as represented by the Energy Select Sector SPDR ETF (XLE), accounted for only a 2% weighting in the S&P 500. Today, it is closer to 10%, where it more than belongs. The chart of XLE is enviable and wildly bullish at a time when the greater majority of S&P 500 stocks have bearish chart patterns. Based on the data I’ve read and the price action of the stocks within the energy sector, the path of least resistance for shares of energy stocks and ETFs looks solidly higher.

As they say…don’t fight the Fed and don’t fight the tape. The Fed won’t be done tightening until mid-July, at the earliest, and inflation will continue to be the albatross around the market’s neck. The good news is that there is a fierce bull market at work in the energy sector where a few clicks of the mouse can do a lot of good—by selling stocks being punished by inflation and upping portfolio weightings in energy assets right away.