The sudden reversal in stocks last week was fueled by a rising wave of short sales combined with bad news and an aggressive withdrawal of trading liquidity in the Eurodollar market, states Joe Duarte, editor of In the Money Options.

Meanwhile, the Fed’s annual gathering of global central bankers is due to convene in Jackson Hole, Wyoming next week.

What could possibly go wrong?

Unfortunately for the bulls, and as I noted that was possible last week in this space, stocks were due for some type of pullback, as the major indexes and the market’s breadth were nearing resistance levels.

Certainly, there are pockets of strength left in this market. But if things don’t get better in the next few days, I expect the bearish trend to reassert itself.

Stocks took a hit on 8/19/22 as a liquidity spasm in the Eurodollar (EUR/USD=X) market on 8/16/22 (see XED chart below) combined with a $2 trillion options expiration and Germany’s spectacular Producer Price Index (PPI) print for the month of July—a gain of 37.2% year over year—was poison to the global bond markets. And the damage spilled into stocks.

Last week I noted the market had reached a “point at which it must decide whether this is a new bull market or not, which means that some indecision will creep into trading strategies.“

And it certainly did. Still, it could take a few more days before the market’s next move becomes fully discernable.

Bonds Tank and Liquidity Dries Up

The bond market didn’t like what happened in Germany. The US Ten-Year Note Yield (TNX) climbed back above its 50-day moving average edging closer to the key 3% yield while the Eurodollar Index weakened considerably, which means system liquidity is drying up. If these trends remain in place, I expect the stock selloff will gather steam. 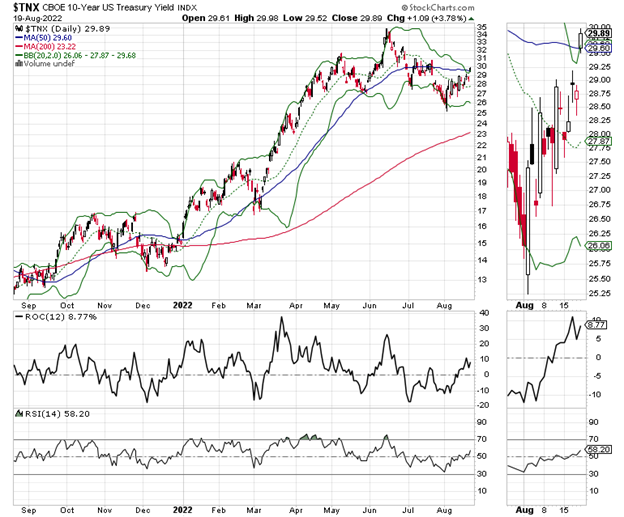 The problem for bonds is that German inflation can easily cross the ocean due to oil and natural gas supply tightening further as US producers export LNG and crude oil to Europe in search of higher spot prices. This would reduce US supplies in the winter and raise domestic prices.

Did Someone Get a Margin Call?

Liquidity is the lifeblood of the stock market. Note the rapid decline in XED which took place on 8/16. That kind of one-day drop in XED is what happens when a lot of money leaves the system at once.

It’s hard to know what triggered the sudden decline in XED but it could be a sign that some big entity got a margin call and had to gather liquidity from somewhere to meet it.

So far, I’ve seen no news to clarify the drop in XED. But with last week’s strange ongoings with meme stocks such as Bed Bath & Beyond, Inc. (BBBY), there is certainly the possibility that someone big got caught on the wrong side of the trade and had to meet a margin call. 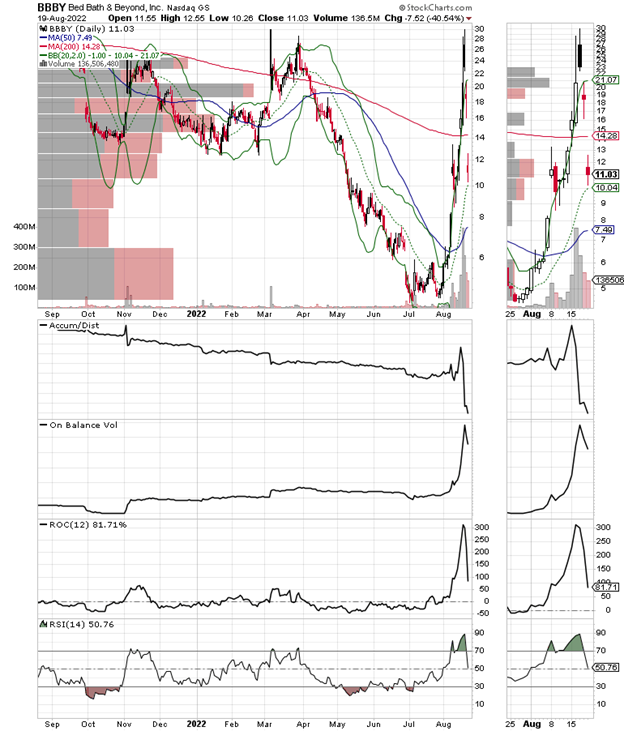 In addition, 8/19 was an options expiration date, which usually adds to the potential for short-term volatility. Now we have to see what happens to XED over the next couple of days. If there is news that some big hedge fund is in trouble, things can get worse in a hurry.

West Texas Intermediate Crude and US Natural Gas had a volatile week. But supplies for both are questionable as the winter approaches, which is why it’s not a good idea to bet against either at the moment. In the short term, we can also see supply cuts if hurricane season picks up. 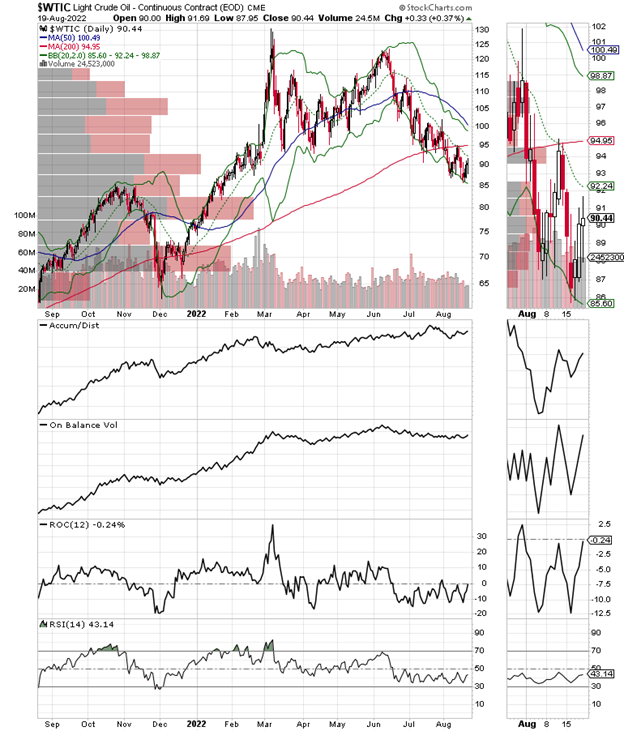 West Texas Intermediate Crude Oil found support at $90 while remaining below its 200-day moving average. Crude oil is still being plagued by the notion that demand is falling due to decaying economic activity in Europe and the emerging markets.

But the energy situation in Europe is not improving, which means that prices can rise in a hurry as demand for crude to be used for winter heating there can easily increase. Accumulation Distribution (ADI) is turning up which suggests there is some short covering going on.

On Balance Volume (OBV) has remained steady during the recent selloff which suggests buyers have not become aggressive sellers. 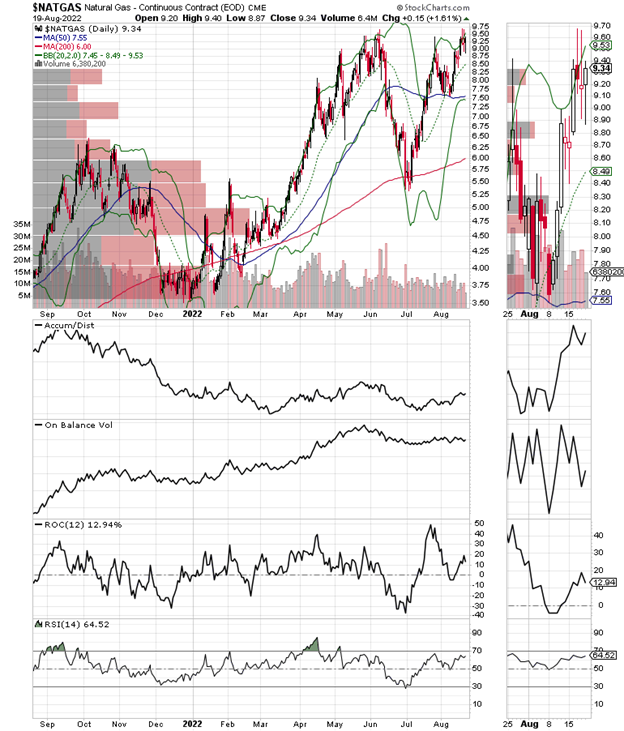 Natural gas held up despite multiple attempts by short sellers to knock it down. But by week’s end, the Accumulation Distribution indicator perked up suggesting they were giving up. A move above $9.60 for NATGAS could lead to a big move higher in a hurry. 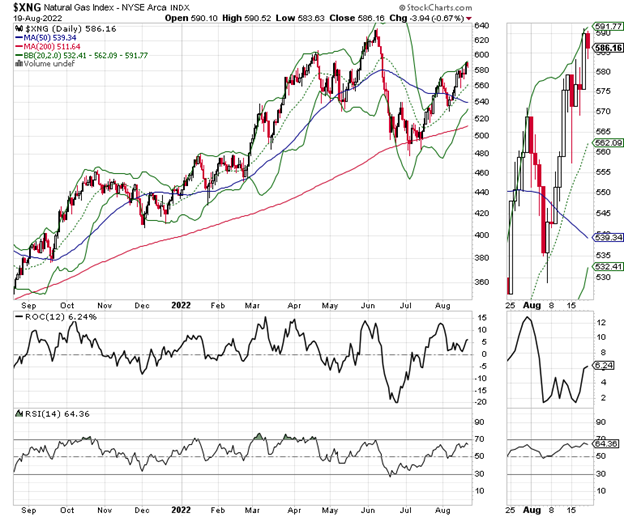 Natural gas stocks, which historically precede moves in the commodity have been trending higher. I’ve been adding oil and natural gas stocks to the Joe Duarte in the Money Options Momentum Plus portfolio lately.

Welcome to the Edge of Chaos

If you’re not a believer in the relationship between the Eurodollar market and the liquidity for stocks, just look at what happened on 8/16 and what followed. Check out our composite breadth chart below.

Three days after a sharp decline in XED, the NYAD Advance-Decline line (NYAD) reversed its bullish move above its 200-day moving average, returning to bear market territory, at least for now.

For its part, the CBOE Volatility Index (VIX) moved back above 20, as put option buyers swamped the market with expectations of a further decrease in stocks.

The S&P 500 (SPX) remained above the 4000-4100 but reversed without trying to move across the 200-day moving average. Accumulation Distribution (ADI) rolled over slightly confirming that short sellers are back. Unfortunately, we did not see a turn up in On Balance Volume (OBV) during the rally, which means that buyers were scarce. 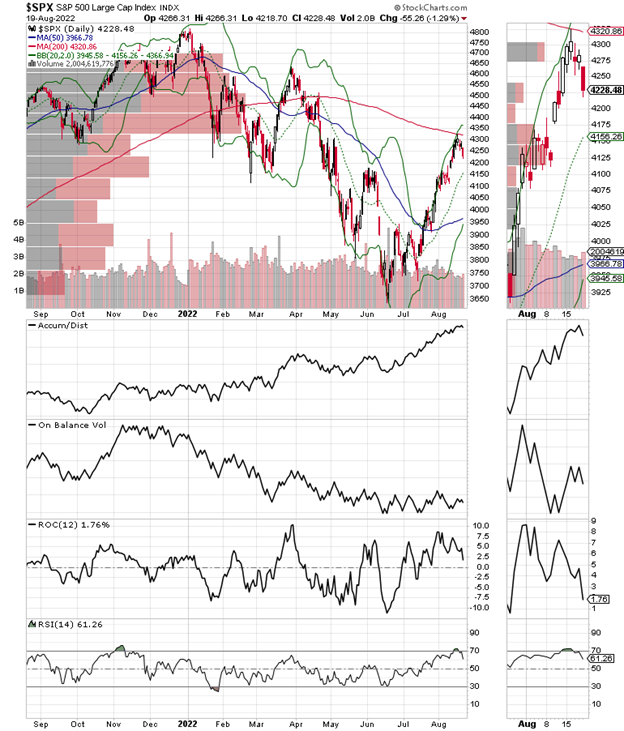 For its part, the Nasdaq-100 Index (NDX) also reversed, but remained above 13,000. There is support at the 20-day moving average. Accumulation Distribution (ADI) suggests that short sellers are coming back and On Balance Volume (OBV) showed that some buyers turned into sellers. 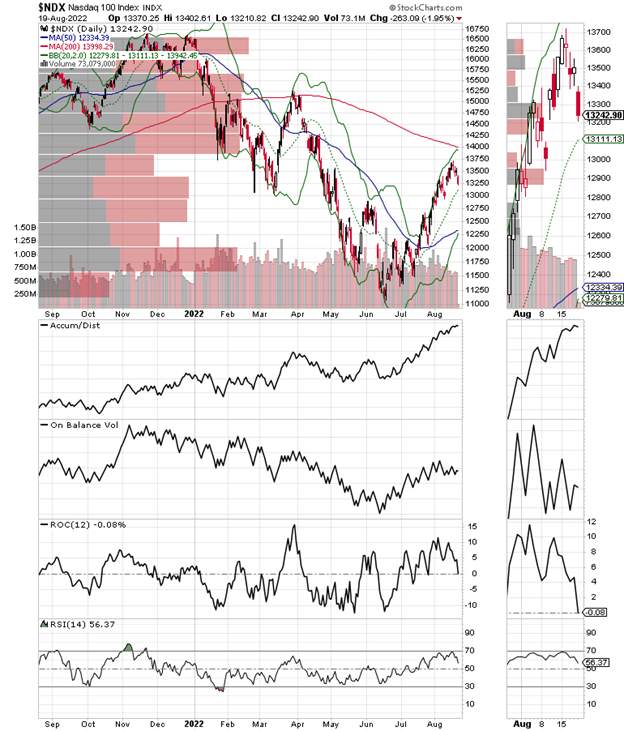