It Was an Ugly Week with No Place to Hide

There was no place to hide, an ugly week, with the Dow, S&P 500 (SPX), Nasdaq, and all eleven S&P SPDR sectors down, notes Bonnie Gortler of bonniegortler.com.

Healthcare (XLV) and Energy (XLE) fell the least, while Industrials (XLI) and Materials (XLB) were the worst sectors. The SPDR S&P 500 ETF Trust (SPY) fell sharply down -4.79% giving back all the previous week's gains and more.

The decline was broad as investors sold stocks unwilling to take risk last week, with Transports and Semiconductors leading the way down. After showing strength the previous week, nasty reversals to the downside occurred. High-yield bonds had no follow-through and reversed lower and international markets remained weak and continue to lag behind the US market.

At the end of May and early June, after breaking its April downtrend (green line), there was an improvement in breadth that stalled quickly, and Ad-Line made a lower low. In July, market breadth improved, starting an uptrend in the AD-Line and a powerful advance in the Nasdaq, but in August, market breadth weakened again.

After a disappointing CPI report last week, buying turned to extensive selling as the week progressed. As a result, program selling by institutions accelerated the decline as short-term support levels broke. An immediate improvement in market breadth is needed for a short-term rally to begin.

Watching new lows on the New York Stock Exchange is a simple technical tool that helps awareness of the immediate trend's direction. New lows warned of a potential sharp pullback, high volatility, and "panic selling" for most of 2022, closing above 150. As the market started to move lower in January 2022, new lows rose sharply, peaking at 792 on 1/24 and again on 2/24 (red circles), implying an increased risk of further selling pressure. Investors in early May unloaded stocks, and new lows expanded to 1063 on 5/9 (pink circle), then on 6/16 (purple rectangle), new lows made a new high of 1092.

Learn more about the significance of new lows in my book, Journey to Wealth, published on Amazon. Here is an excerpt when new lows are above 150, the market is negative, higher risk, and selling is taking place. Sometimes it could be severe, and sometimes on a very nasty day, you can have “panic selling,” and big wild swings (high volatility) to the downside may occur. After contracting in June and July, new lows began to increase in mid-August, rising above 150 (blue horizontal line), the high-risk zone. New lows on the New York Stock Exchange Index (NYSE) rose sharply last week, shifting to the high-risk zone, above 150, closing at 362 on 9/16 (pink circle). Watch next week if new lows expand, which would be bearish, or begin to contract and fall below 150, then fall to between 25 and 50, indicating lower risk and a sign of a potential short-term rally. 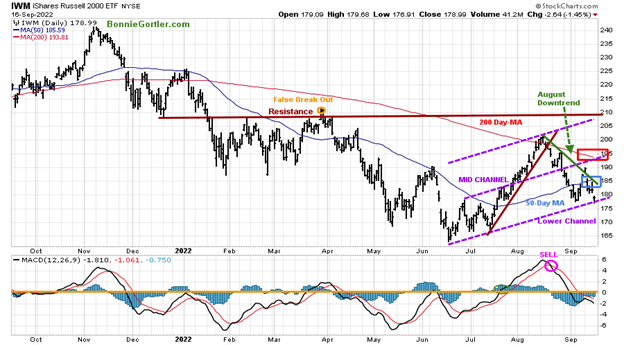 MACD (middle chart) remains on a sell after a brief turn-up and is falling, implying more downside momentum. The short term is negative unless a turn-up with a close above 185.00.

MACD (bottom chart) remains on a buy (green circle) along with breaking the downtrend from March 2021 (green line), implying the downside momentum has subsided. However, it’s concerning MACD has turned down and has failed to get above zero, which is a sign of underlying weakness.

IWM held support at 175.00, above its 200-Week MA and above the June low. However, more strength in IWM is necessary for evidence that the decline will not continue towards the June low. 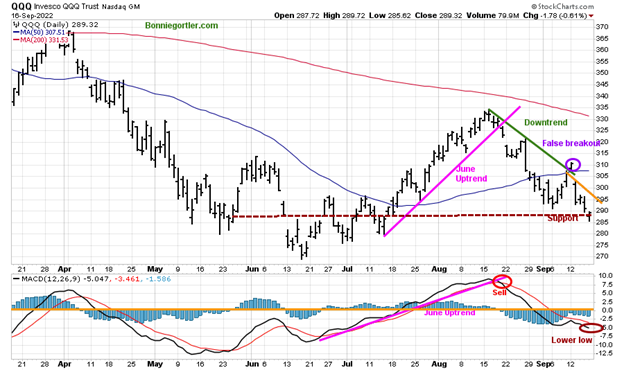 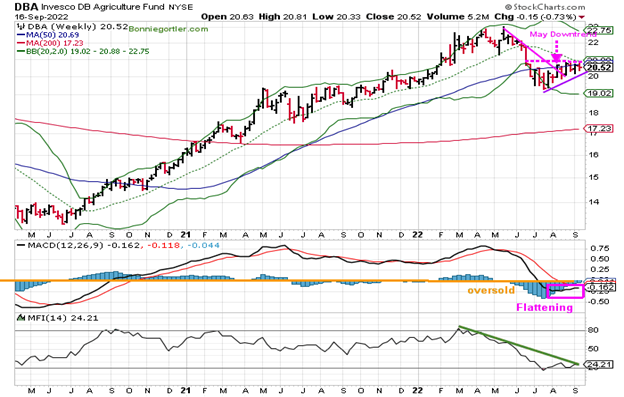 The Invesco Agricultural Fund (DBA) broke the steep May downtrend (pink line) but stalled and is in a trading range. DBA fell -0.73 % last week, closing at 20.52. MACD, a measure of momentum, is on a sell, with no real strength yet, which is a little concerning. Money flow is rising but remains in a downtrend for now.

For those of you who did buy, as mentioned on the 8/12 market update to manage risk, continue keeping a tight stop if you invested in DBA and close your position (sell stop) if DBA closes below 19.80. The low was 19.87 on 8/19. I am looking for a breakout of the current trading range within one-three weeks as the 12-14 week cycle is likely to bottom. If Money flow continues to rise, the breakout likely is to the upside. On the other hand, if Money flow begins to fall and the DBA uptrend is violated, the breakout will be to the downside. Time will tell. Continue to follow the stop.

Energy, the strongest sector of 2022, rose in early August, forming an uptrend after its pullback from the June highs.XLE fell - 2.68% last week. It's positive that XLE closed above the 50 and 200-Day Moving Averages. However, it’s concerning XLE has formed a pattern of lower highs and broke the August uptrend. The strength of each rally is weakening, so caution is recommended in this sector unless XLE closes above 83.00. Resistance is at 83.00 and 86.00. Support is at 76.00 and 70.00 (brown line), followed by 65.00 (pink line). 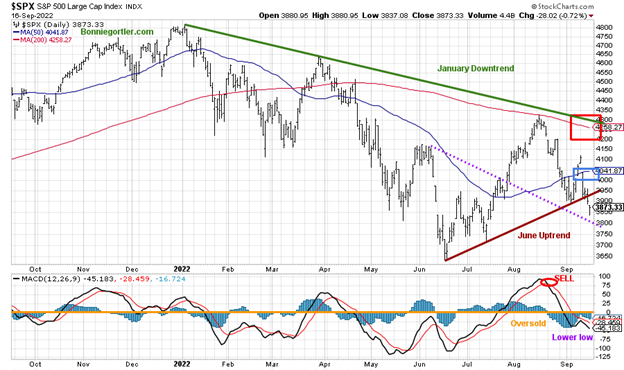 The S&P 500 fell -4.79%, closing at 3873.33, giving back its previous week's gains, and closed below support at 3900.00 and below the June uptrend (brown line) and its 50-Day Moving Average (blue rectangle) and the 200-Day Moving Average (red rectangle. The critical support is at 3800.00 (purple dotted line). It will be favorable if SPX has enough strength to close above 3950.00, followed by 4050.00 and 4200.00. MACD, lower chart, is oversold, below zero, and failed to give a buy last week after turning up. Instead, MACD made a new low, implying the SPX will likely have further downside toward the June low. The bottoming process continues, and the risk is high that more downside remains.

Monitor Junk Bonds For a Clue to Short-Term Direction 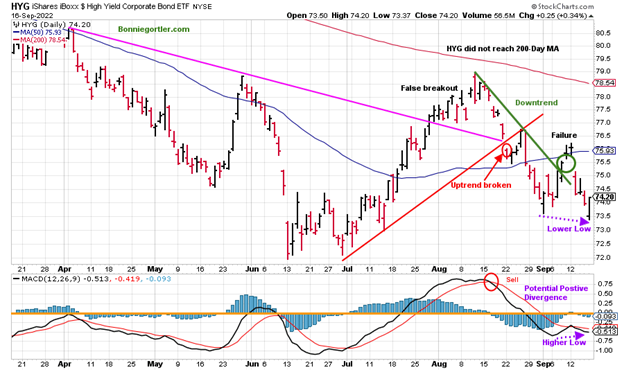 Last week, investors were unwilling to take on the risk, selling rather than buying Hi-Yield Bonds (HYG). Support is at 73.00. Resistance is at 74.50, 76.00, and 79.00. MACD (lower chart) remains on a sell, close to a buy signal if HYG shows strength. A potential positive divergence has formed. HYG made a lower low, and MACD had a higher low. Be alert to a turn-up in MACD generating a buy. Strength in HYG would be bullish for Equities and high-yield bonds. On the other hand, the opposite is true. Weakness in HYG would be bearish for Equities and high-yield bonds.

The Transportation Average (IYT) broke its price downtrend from March (green circle) in July and then consolidated near the 50-Day Moving Average before rallying toward the 200-Day MA and turned down. Selling continued in IYT after breaking the uptrend (pink line) in August and fell below support at 235.00 (purple line). Another rally attempt occurred in early September, after breaking the August downtrend but was unsuccessful. Last week IYT fell sharply, failing to get through resistance at 240.00 and a bad earnings report by Fed Ex (FDX). IYT gapped down below support at 225.00, closing at 215.64, falling -8.41% for the week. MACD remains on a sell, and downside momentum accelerated lower, making a new low.

Silver to breakout to the upside? 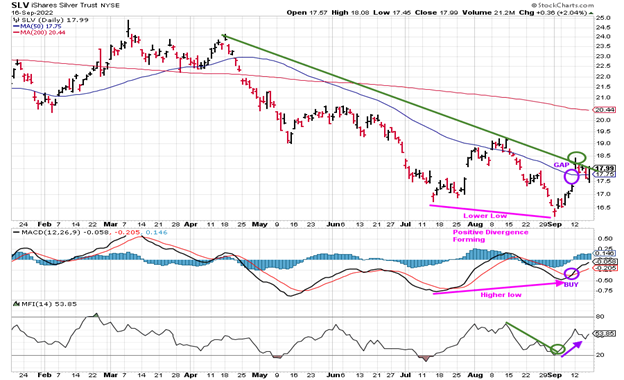 In the Market Update on 9/9/22, I suggested checking out the silver chart and noticing the positive divergence forming—a lower low in SLV with a higher low in MACD. A MACD buy will confirm.

Silver closed higher for the week, +3.87% breaking the downtrend from August, tested the breakout, filled the gap, and closed near its high of the day on Friday.

Money Flow rose sharply into the rise, breaking the downtrend (green line) followed by a pullback and turn up. Time will tell if Silver can follow through further and a sustainable rally. For those who bought, to manage risk, raise the sell stop to 16.87 from 16.14.

There was no follow-through to the upside last week as stocks reversed lower, with the S&P 500 and the Nasdaq having their largest weekly decline since June. Market breadth got worse, and downside momentum accelerated. The bears took control selling stocks as bulls went into hiding.  Inflation concerns remain. Investors are waiting for an expected increase of at least 0.75% at Wednesday’s Federal Reserve meeting. The short term is dubious and indicates the downside may continue, and caution is prudent. There is no need to pick a bottom. Instead, be patient until market breadth improves and the short-term technical improves to participate in a lower-risk environment.