There was no place to hide with back-to-back ugly weeks as The Dow, S&P 500 (SPX), Nasdaq, and all eleven S&P SPDR sectors are down, notes Bonnie Gortler of bonniegortler.com.

Fear amongst investors of recession concerns increased and accelerated the decline after the US and global central bank tightening. Investors dumped US stocks last week, led by Small Caps and Transportation falling. International markets were also hit, led by Europe.

The Ten-Year US Treasury yields rose sharply, closing at 3.697% last week, above the June highs, breaking the upper channel, and is at the highest since 2010. Yields could stall in the near term at 3.80%, but even higher yields are possible. Support is at 2.85%, followed by 2.30%.

Interest rates continue rising at a fast pace not seen in many years.

At the end of May and early June, after breaking its April downtrend (green line), there was an improvement in breadth that stalled quickly. The rally in Nasdaq stalled, then the weekly AD-Line made a lower low. In July, market breadth improved, starting an uptrend in the AD-Line with a powerful advance in the Nasdaq. However, in August, market breadth weakened again, followed by a new low last week.

A longer-term view on a daily basis shows Nasdaq breadth with the potential of a significant breakdown (Pink Rectangle). Time will tell how serious the weakness in breadth really is.

Watching new lows on the New York Stock Exchange is a simple technical tool that helps awareness of the immediate trend's direction. New lows warned of a potential sharp pullback, high volatility, and "panic selling" for most of 2022, closing above 150. As the market started to move lower in January 2022, new lows rose sharply, peaking at 792 on 1/24 and again on 2/24 (red circles), implying an increased risk of further selling pressure. Investors in early May unloaded stocks, and new lows expanded to 1063 on 5/9 (pink circle), then on 6/16 (purple rectangle), new lows made a new high of 1092. After contracting in June and July, new lows began to increase in mid-August, rising above 150 (blue horizontal line), the high-risk zone.

Last week new lows on the New York Stock Exchange Index (NYSE) rose sharply to the highest level in 2022, remaining in the high-risk zone, above 150, closing at 1106 on 9/23 (pink circle).
Caution is recommended until new lows contract and fall below 150.

IWM closed at 167.31, down -6.53 %, accelerating lower and remains below Its 50-Day Moving Average (blue rectangle) and the 200-Day Moving Average (red rectangle), a sign of underlying weakness. IWM stalled below the mid-channel in early September (middle purple dotted line) at 190.00. Last week IWM broke the lower channel, accelerating lower and falling to the next channel (pink dotted line).

The Russell 2000 (IWM) closed stalled below the 50-Week Moving Average and then turned down, breaking the intermediate July uptrend. Last week IWM broke through support at 175.00 and turned down, closing near its lows. The downside objective is at 137.00. Resistance is at 175.00, 190.00, and 200.00. MACD (bottom chart) remains on a buy (green circle), and no sell can occur until MACD goes above zero. MACD failing to get above zero is a sign of underlying weakness.

The bottom chart is MACD (12, 26, 9), a measure of momentum that remains on a sell. It’s a negative sign that momentum continued to weaken with the heavy selling last week. MACD made a new low suggestion caution in the near term. Bottom fishing in the Nasdaq is dangerous until at least QQQ closes above the first resistance at 285.00. 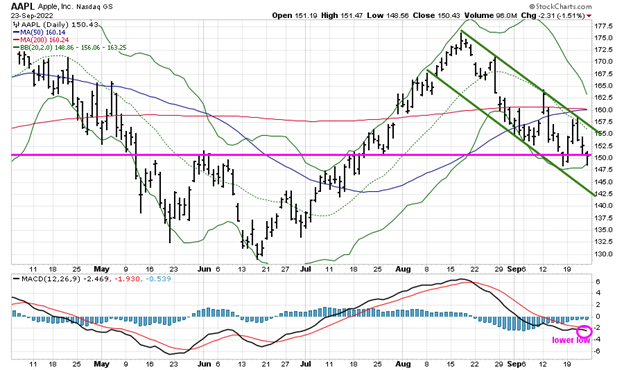 Apple, closing at 150.43, held steady, only down -0.18 for the week. The biggest holding in QQQ, However, AAPL remains in a downtrend closing below its 50 and 200-Day Moving Average, with a short-term downside objective of 142.50. A close above 160 would cancel the downside objective and potentially ignite a rally into the quarter end. MACD, a measure of momentum (lower chart), made a lower low, implying weak momentum and further weakness is likely

The Invesco Agricultural Fund (DBA) broke the steep May downtrend (pink line) but stalled and is in a trading range. DBA fell -1.27 % last week, closing at 20.26, slightly above the uptrend (purple line) MACD, a measure of momentum, is on a sell, moving sideways, with no real strength yet, which is concerning now.
Money flow is rising but remains in a downtrend which could change quickly if DBA moves higher.

For those who did buy, as mentioned on the 8/12 market update, to manage risk, continue keeping a tight stop if you invested in DBA. With the recent overall downside pressure in all sectors, raise your sell stop from 19.80 if DBA closes below 20.14 (slightly below last week's low). A breakout of the current trading range is likely as the 12–14-week cycle is due to end.  If Money flow continues to rise, the breakout likely is to the upside. On the other hand, if Money flow begins to fall and the DBA uptrend is violated, the breakout will be to the downside. Time will tell. Continue to follow the stop.

The S&P 500 (SPX) fell -4.65%, closing at 3873.33, after losing -4.79% the previous week, and closed below support at 3900.00 and below the June uptrend (brown line), and its 50-Day Moving Average (blue rectangle) and the 200-Day Moving Average (red rectangle. SPX broke below the critical support at 3800.00 (purple dotted line, and accelerated lower (purple circle). The risk of a further correction is high until SPX has enough strength to close above 3900.00, followed by 4050.00. MACD, lower chart, is oversold, below zero, and failed to give a buy after turning up. Instead, MACD made a new low, implying the SPX will likely have further downside toward the June low. The risk is high that more downside remains. 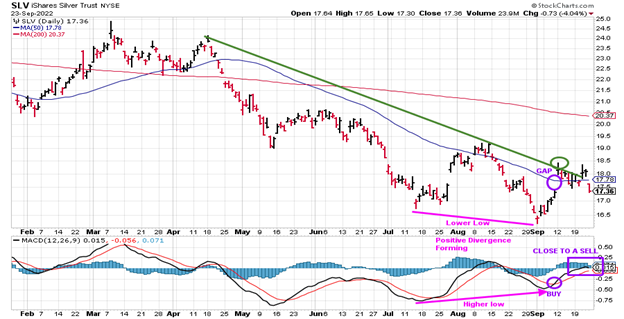 In the Market Update on 9/9/22, I suggested checking out the Silver chart and noticing the Positive Divergence forming—A Lower low in SLV with a higher low in MACD. A MACD Buy will confirm.

Silver (SLV) closed lower for the week, down -3.50% giving back most of its gains from the previous week, failing to breakout out to the upside. MACD is close to giving a sell and starting to roll over.
For those who bought, to manage risk, use a sell stop if SLV closes below 16.87.

Time will tell if Silver can follow turn back up, and a sustainable rally will occur. If you are interested in following this chart and other charts during the week, I invite you to join my FB group Wealth Through Market Charts, where I post updated charts intraday throughout the week.

The bears remain in control. Stocks continued to decline last week, and the technical indicators are breaking down. Market breadth remains poor as downside momentum accelerates. With the thrust to the downside, there is no sign of a bottom yet. The short term remains dubious and indicates the downside may continue, and caution is prudent.  There is no need to pick a bottom. Instead, be patient until market breadth improves and the short-term technical improves. Remember to manage your risk, and your wealth will grow.

Do you like charts? I invite you to my FB group Wealth Through Market Charts or email me at Bonnie@Bonniegortler.com. I would love to hear from you. If you have any questions or comments or would like to talk about the market, click here.