The third quarter ends with the worst September for stocks in twenty years, notes Bonnie Gortler of bonniegortler.com.

The Dow, S&P 500 (SPX), Nasdaq, and ten of eleven S&P SPDR sectors were down. Energy (XLE) was the strongest sector, while Technology (XLK) and Utilities (XLU) were the worst sectors. The SPDR S&P 500 ETF Trust (SPY) fell -2.93%, continuing lower the last three weeks.

Fear amongst investors increased as investors and institutions continued to dump stocks, led by Semiconductors, Emerging Markets, and Technology ETFs falling more than the S&P 500.

2022 is one of the worst and most challenging years for investors, with ten of eleven S&P SPDR sectors down sharply. Only XLE showed gains for the year. The Communication Services Sector (XLC) and XLK are the worst sectors, while the SPY fell -23.93%. 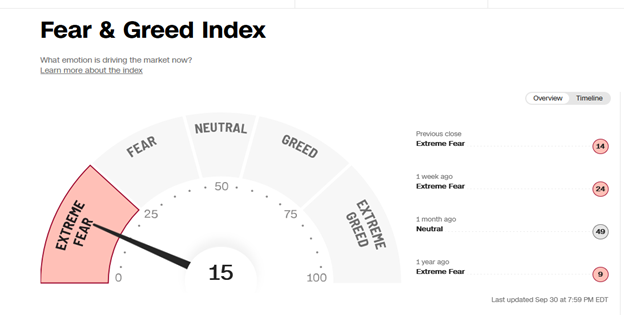 Market sentiment based on the CNBC Fear and Greed Index (a contrary indicator) closed at 15, showing extreme fear falling from 49 only one month ago.

The Ten-Year US Treasury yields rose, closing at 3.804% last week, backing off the high of 3.964%, but remaining above the upper channel. Yields could consolidate soon, but interest rates continue rising at the fastest pace not seen in decades. The major averages closed near their lows of the week. The Dow was down -2.92%, S&P 500 down -2.91%, and the Nasdaq down -2.69%.

A longer-term view on a daily basis shows Nasdaq breadth with the potential of a significant breakdown (pink rectangle).

Time will tell how severe the weakness in breadth really is.

Expect intra-day volatility to remain high as long as VIX closes above the uptrend at 27.00 (orange line). The following support is 24.00 (brown dotted line), which has been acting both as resistance and support. Potentially VIX could go to 60 or higher if the selling accelerates.

Watching new lows on the New York Stock Exchange is a simple technical tool that helps awareness of the immediate trend's direction. New lows warned of a potential sharp pullback, high volatility, and "panic selling" for most of 2022, closing above 150. As the market started to move lower in January 2022, new lows rose sharply, peaking at 792 on 1/24 and again on 2/24 (red circles), implying an increased risk of further selling pressure. Investors in early May unloaded stocks, and new lows expanded to 1063 on 5/9 (pink circle), then on 6/16 (purple rectangle), and to a new high of 1092.

After new lows contracted in June and July, new lows began to increase in mid-August, rising above 150 (blue horizontal line), the high-risk zone. As a result, the broad market weakened. Despite the market averages falling last week, New Lows on the New York Stock Exchange Index (NYSE) closed at 485 (brown circle), well below the peak of 1106 on 9/23 (pink circle). It's an encouraging sign new lows have contracted. However, New Lows remain in the high-risk zone, above 150. Caution is recommended until new lows contract and fall below 150.

IWM stalled below the mid-channel in early September (middle purple dotted line) at 190.00. Last week IWM closed at 164.92, down only -0.92%, closing slightly under support at 165.00 but below Its 50-Day Moving Average (blue rectangle) and the 200-Day Moving Average (red rectangle), a sign of underlying weakness. 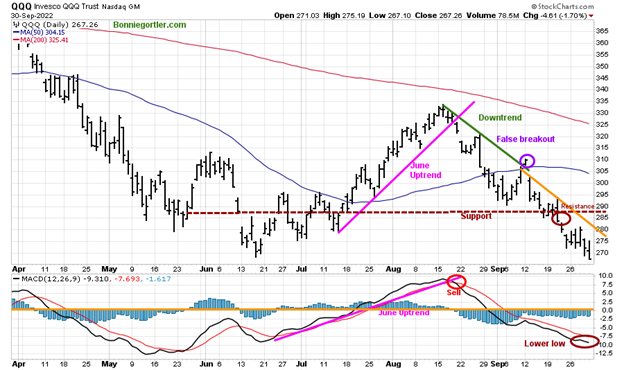 The chart shows the daily Invesco QQQ, an exchange-traded fund based on the Nasdaq 100 Index. The two top holdings in QQQ are Apple (AAPL) and Microsoft, with over 20.00%. Both stocks have fallen significantly and impacted the direction of QQQ. QQQ fell -2.99%, closing at 267.26, continuing in a downtrend after a false break out of the August downtrend (green line). 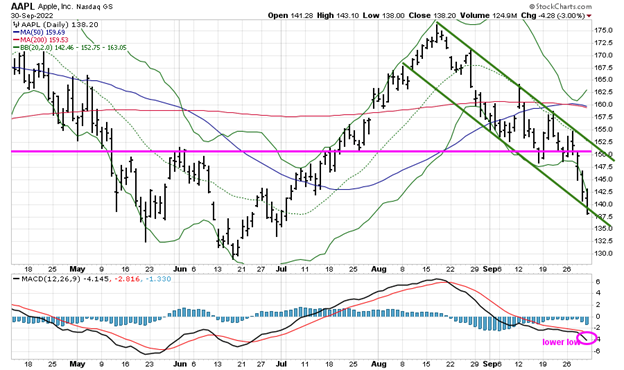 Apple, the biggest holding in QQQ, succumbed to selling pressure closing at 138.20, down -8.13% for the week, remaining in a downtrend closing below its 50 and 200-Day Moving Average, hitting last week's short-term downside objective of 142.50, mentioned in last week’s market update 9/23/22 and slightly below the lower channel.  A potential test of the June lows is possible. MACD, a measure of momentum (lower chart), made a lower low, implying weak momentum and further downside unless an immediate turn-up occurs. 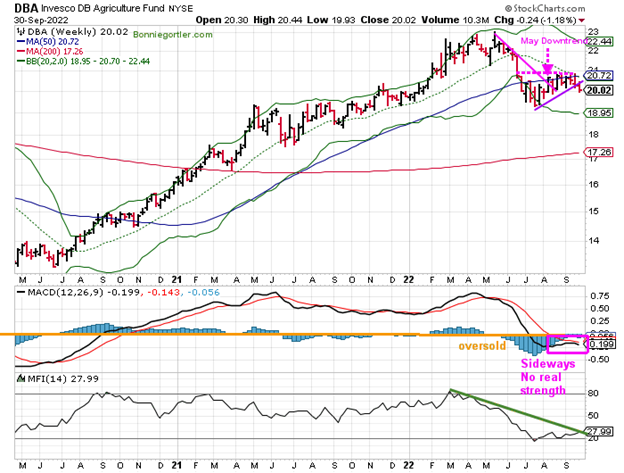 The Invesco Agricultural Fund (DBA) broke the steep May downtrend (pink line) but stalled and is in a trading range. DBA fell -1.18 % last week, closing at 20.02, below the July uptrend (purple line) MACD, a measure of momentum, remains on a sell, moving sideways, with no real strength implying there may be further downside. Money flow is rising but remains in a downtrend. For those who did buy, as first mentioned on the 8/12 market update, the sell stop was raised to 19.80 and was hit last week. 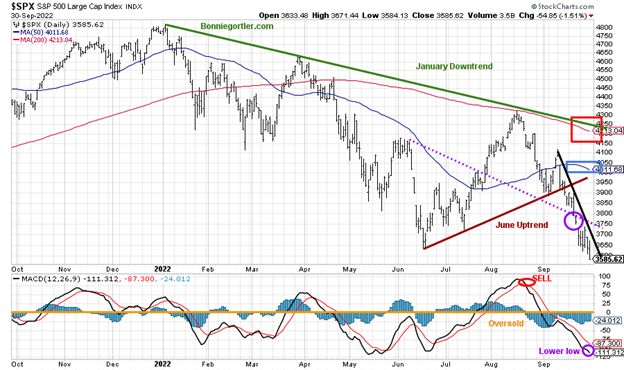 The S&P 500 broke below the critical support at 3800.00 (purple dotted line, and then accelerated lower (purple circle) after breaking the June uptrend (brown line). SPX closed at a new low for 2022 at 3585.62, down -2.91%, and remains below its 50-Day Moving Average (blue rectangle) and the 200-Day Moving Average (red rectangle). MACD, lower chart, remains oversold, below zero, and falling. MACD failed to give a buy after turning up; instead, MACD made a new low, implying downside momentum has not slowed. The risk of a further correction is high until SPX has enough strength to break the short-term downtrend (black line) and then close above 3750.00.

In the Market Update on 9/9/22, I suggested checking out the Silver chart and noticing the Positive Divergence forming—a lower low in SLV with a higher low in MACD. A MACD Buy will confirm. SLV gave a buy, rallied, tried to break out, but turned down again. A volatile week, SLV closed at 17.50, up 0.81%. MACD last week gave a sell. If there is strength this week, SLV will likely generate a buy.

Last week, a sell stop was recommended if SLV closes below 16.87. SLV intraday hit the level on 9/27 but didn’t close below, and SLV also missed on 9/26, closing at 16.89. If you are still invested and weren’t stopped out, get out of your position if SLV closes below 16.87. Time will tell if Silver can follow through to the upside, and a sustainable rally will occur. If you are interested in following this chart and other charts during the week, I invite you to join my FB group, Wealth Through Market Charts, where I post updated charts intraday throughout the week. Keep an eye on the strength of global markets 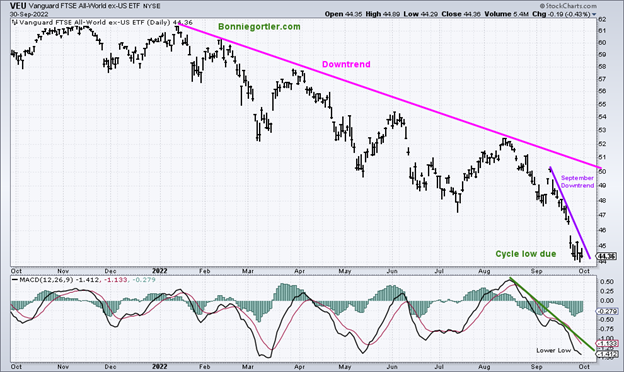 As of Friday’s close, no bottom has formed based on improving momentum or a break in the September short-term downtrend. A close above 45.50 would be a positive sign for the start of a potential rally. MACD, a measure of momentum, made a lower low last week, implying downside momentum remains.

On the other hand, a potential short-term cycle bottom is due. However, if VEU continues to fall over the next several days, it would imply a cyclical failure has occurred, and the start of October will attract more selling and further downside pressure.

The bears remain in control. Equities and Bonds are down sharply in 2022. Uncertainty of economic concerns, rising interest rates, falling prices in global and US markets, and continued weakness in technical indicators warrant caution. Technical indicators remain oversold with fear at extreme levels and heavy put buying, but no bounce yet. The risk is high for further downside. Caution is prudent. Be patient until negative market breadth turns positive, and downtrends change to uptrends with a slowing downside momentum. Remember to manage your risk, and your wealth will grow.

I would love to hear from you. If you have any questions or comments or would like to talk about the market email me at Bonnie@Bonniegortler.com.