One of the great divides of the past week was how high-growth equities decoupled from their years-long correlation to Bitcoin, Ethereum, and a host of leading cryptocurrencies, explains Bryan Perry, editor of Cash Machine.

At its peak about a year ago, when Bitcoin was trading at $68,000, the cryptocurrency universe was valued at around $3 trillion. It was also around the same time that the major stock averages hit their all-time highs.

Fast forward to November 11’s close, and the cryptocurrency markets are now valued at roughly $900 billion, according to CNBC, culminating in the Chapter 11 filing by FTX Trading Limited. There is also quite possibly more downside yet to be realized. So much for the “future of money” that was supposed to transform financial systems and be the quintessential inflation hedge. Instead, inflation is running at a 40-year high, trillions of dollars of value in customer accounts are vanishing on exchanges that never even came close to stabilization and people are being prevented from withdrawing funds from their accounts.

It gets worse. Over the weekend, as FTX was attempting to transfer $663 million of digital assets to cold storage wallets, which are more secure and not connected to any exchange, hackers were able to steal $441 million of the transfer, as reported by the cryptocurrency analytics firm Elliptic. The Securities and Exchange Commission (SEC) and Federal Trade Commission (FTC) are now aggressively investigating whether FTX was using customer funds for trading at affiliate companies like Alameda Research. Indeed, Alameda and ten other companies tied to FTX also filed for bankruptcy.

By comparison, about $5 trillion of investor capital was wiped out in the dot-com crash. The net worth of US households and nonprofit organizations fell by roughly $14 trillion from a peak of approximately $69 trillion in 2007 to a trough of $55 trillion in 2009. So, in real dollar terms, if the entire cryptocurrency market lost most or all of its value, the global financial markets would still function just fine. At the end of 2021, the global financial system was valued at around $458 trillion.

As the nuclear winter sets in for Bitcoin and the rest of the crypto world, the Nasdaq is trading higher, with last week’s bullish performance brushing aside the meltdown in digital currencies. Instead of what had been a highly correlated relationship of speculative asset classes, unparalleled panic is overwhelming the cryptocurrency markets while stocks in cloud computing, semiconductors, Internet of Things, biotech, artificial intelligence, augmented reality, cybersecurity, big data, enterprise, fintech, networking, and data storage are surging.

The tech-heavy Nasdaq roared higher by 8.1% last week, with the index clearing its 50-day moving average (blue line) on a huge spike in volume. As this broad rally, triggered by the tamer-than-forecast CPI report, is being viewed with extreme caution about its ability to last, the chartists would argue strongly that one of the major tenets of technical analysis is that “volume precedes price.” This means that when volume increases, the trend of the market usually continues in the same direction. 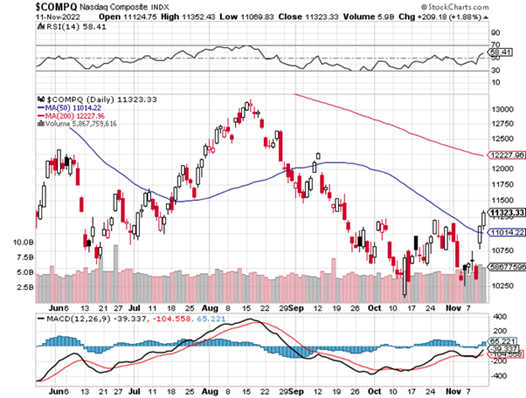 It’s almost as if the better inflation news was married up with fund flows coming out of cryptocurrencies and rushing into stocks to recoup their losses in what had been their primary asset class before the rise of Bitcoin and other digital coins. There seems to have been capitulation in one market and a desperate need for a new place aside from cash. So, Friday’s big follow-through upside price action for the Nasdaq had the look and feel of this massive rotation. This is just my observation.

The week or two ahead will provide either confirmation of this upside breakout or evidence of another failed bear market rally. More inflation data will dictate bond prices and yields, and further news of gains by Ukrainian forces against Russia could also provide further relief and short covering. There are definitely some nervous short sellers out there.

If the market, and more specifically the Nasdaq, appear to have seen their lows, income investors have a few opportunities to consider tech-rich covered-call exchange-traded funds (ETFs) that are paying double-digit-percentage yields with monthly payouts.

One that I recommend is the JP Morgan Nasdaq Equity Premium Income ETF (JEPQ)—currently yielding 10.4%.

There are more specific details regarding JEPQ on www.etf.com, which I would highly recommend reviewing (along with the home page of the fund) before considering investing. But if the charts don’t lie, and the Nasdaq holds its lows, then this ETF might be a good fit to garner a fat yield while wagering on an eventual rebound for the tech sector and the Nasdaq over the long term.