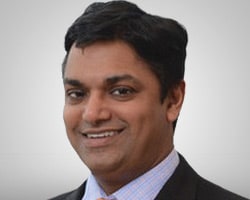 Rajat Shah, the founder and CEO of PD Restaurants, LLC, spent the last five years at Delaware North. Mr. Shah held the positions of executive vice president, general counsel, external affairs and secretary. As a member of the office of chief executive, he was responsible for the overall strategic direction of the company, the deployment of capital for both organic and non-organic growth and new initiatives. Mr. Shah's initial post at Delaware North was head of corporate development where he helped increase revenues for the company by $1 billion over 5 years. Mr. Shah was instrumental in the acquisitions of Patina Restaurant Group, GEM Gaming and Entertainment and Ruby 7 Studios for Delaware North.