Technical crude outlook from Al Brooks, prior to today’s news on the end to Iran sanction waivers.

The crude oil rally is near a measured move target. Traders should expect that the two-week tight trading range will probably be the Final Bull Flag before there is a pullback to around $60.

The crude oil futures market has been in a strong bull trend for four months. The daily chart has been sideways for two weeks. This is therefore a bull flag. With a measured move target just 26¢ above the top of the bull flag, crude oil will probably reach the target this week. But, what then? 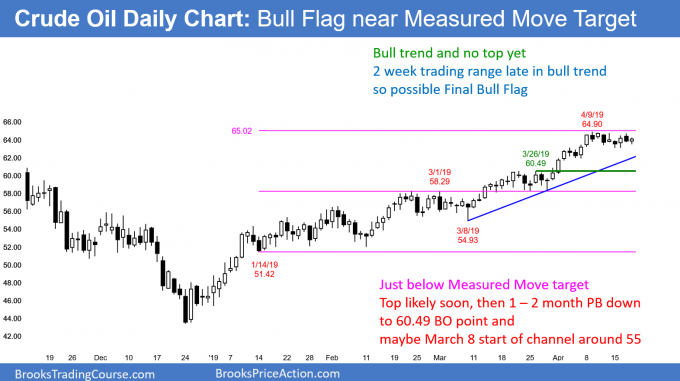 A tight trading range late in a bull trend is often the Final Bull Flag. Because the market has been sideways, traders think that the current price is fair. If there is a bull breakout, crude oil will be above a fair price. Also, many bulls will take profits at the measured move target. Consequently, the small trading range is a good candidate for the Final Bull Flag.

When looking at any bull trend of any market, once there is a trend reversal, look back at the final bull flag. It is often a tight trading range just below resistance. Therefore, when traders see a flag like this in a buy climax, they know that many bulls will take profits on a breakout above the bull flag. If there is heavy profit-taking, there will be a swing down.

It sometimes is the start of a bear trend. But, when the bull channel is tight, like the one in crude oil, a conversion into a trading range is more likely. As a result, traders will look for a reversal down from around $65.

If there is a big bear bar or several consecutive small bear bars, traders will conclude that strong profit-taking is underway. At a minimum, they will expect at least a couple legs down to support.

The first support is the March 21 high of $60.39. That is the breakout point of the current three-week breakout. Traders should expect a test down to around $60 in the next couple of weeks.

If the reversal down is strong and falls far below $60, the next support is the March 1 high at $60.39. That is also a breakout point. Below that is the March 8 low just below $55.

How high can a buy climax go?

Suppose that the past two weeks is not the Final Bull Flag. How high can the rally go? There is no limit, but the current rally is extreme. That means that it will attract an increasing number of profit takers. Also, the bears will begin to bet on a reversal down from a buy climax.

That is why a pullback is likely soon. The pullback could simply be a tight trading range that lasts for a few weeks. More likely, it will test at least $60, just below the most recent breakout point.

When bulls take profits after a big rally, they are not looking to buy again a few bars later. They would simply hold long. Profit-takers want to wait to see how much profit-taking will take place. They typically will wait 10 or more bars and for at least a couple legs down.

At that point, if the selling is stopping, the bulls will buy above a bull bar and bet on a resumption of the rally. When a buy climax is as extreme as this one has been, the pullback will likely continue sideways to down for a month or more.

Until there is a clear top or a strong reversal down, the bulls will continue to buy. However, a potential Final Bull Flag just below a Measured Move target typically leads to profit taking. Consequently, traders will look for a short-term top within the next couple weeks.

This analysis was made prior to the Trump Administration announcing that it would not extend sanctions relief to buyers of Iranian crude. It is hard to determine whether the sharp rally on the sanction news will extend the crude rally further or signal a blow-off top.

Both Elliott Wave Analysis from Avi Gilburt and Fibonacci analysis from Carolyn Boroden suggest that...