Its September, Does the Market Have to Drop?

September is historically the worst performing month for equities; however, the cyclical outlook is bullish. Jeff Greenblatt says, don’t fight it, but don’t become complacent.

Equity markets don’t look like they want to drop. That could change as markets have hit the final phase of the big golden spiral window for 2019.They didn’t drop in week 618, and quite frankly unless something changes, they don’t look like they want to drop right now either. Before you get complacent about this, markets have a way of stretching a cycle to the point participants give up on the potential they ever will drop. Then they drop.

That being said, I’m monitoring my own emotions. Here’s a mini trading lesson. It’s okay to feel however you are going to feel when you are in a trade. If a trade I’m participating in starts to seriously take off in the right direction, I’ll start bouncing off the walls. I wish that on you, it’s a good place to be. The difference between intermediate level/losing traders and winners is the fact if you find yourself in that position, you’ll know it’s time to either keep a good trailing stop or cash out of the trade.

Understanding the cycles, the way I do, my emotions are telling me we are back in a situation where the market has only one way to go and that is up. I’m very close to giving up on the idea the market can drop this month. What is it going to make it drop? As you can see from my 180-minute Nasdaq 100 chart, price and time lined up perfectly on Tuesday to be a 48% retracement and 47 bars (see chart below). In the world of Kairos which I taught at a recent Traders Expo; you don’t get a better setup than what you see here. 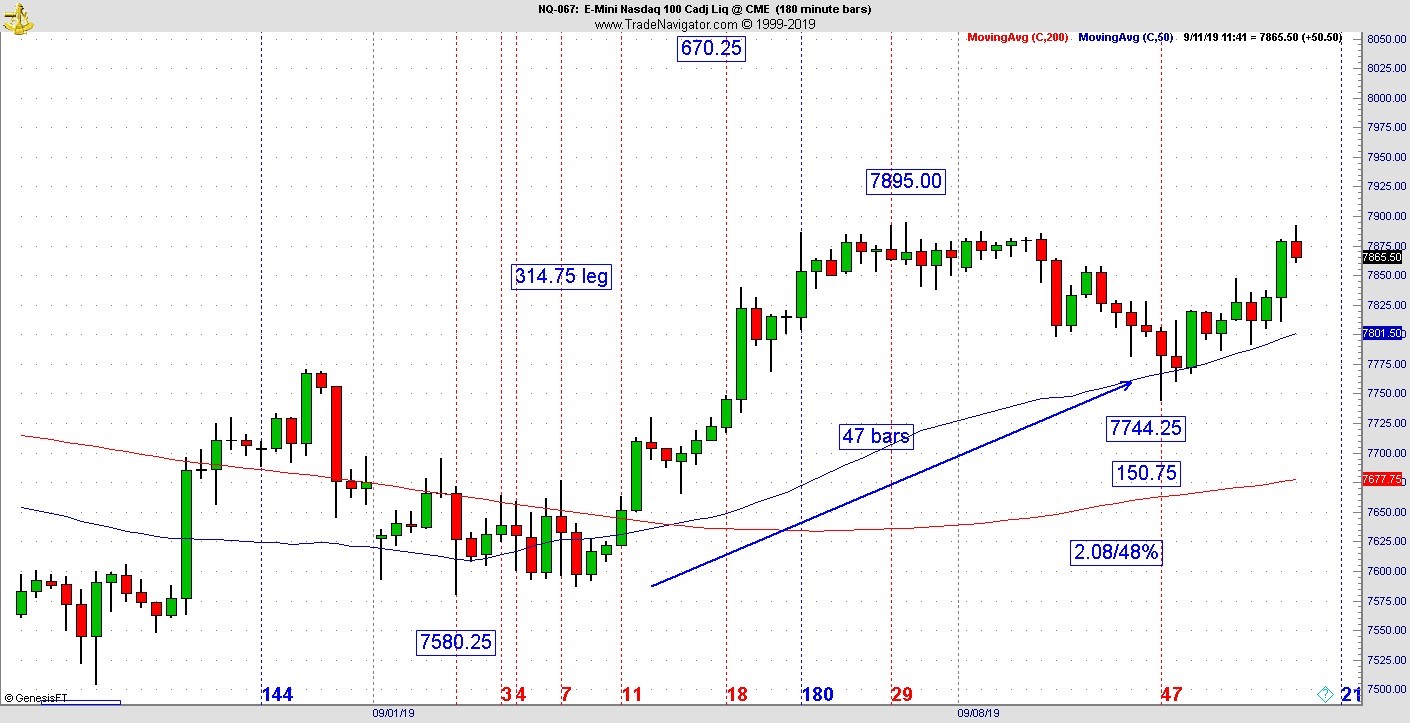 Here’s the challenge. In a good market this is the kind of precision that should get a trading leg up. First of all, this is a bullish signal, which means bears have to find a way to get the ball back. Does that make sense?  It’s not like the market is lining in a bearish way, it’s not. If you are a bull, good for you. That being said, given this is September, the only way a market is going to rollover based on something like this is if it becomes a failed breakout.

Markets will drop in two ways: Either we get a bearish setup and it goes or it has a bullish setup which doesn’t go. Then by default the path of least resistance changes and then it gets a bearish setup. Following this logic, it makes no sense to be short on a bullish setup banking on the possibility the breakout is going to fail. Traders don’t do that intentionally, but many find themselves on the wrong side simply because they don’t see what is coming against them. That’s the bad news for bears.

I do have some promising news. Crude oil just took the hit after a bearish setup. Its only one sector but if oil were to drop here it could take oil stocks with it and then the stock market would lose an important sector. The rest of what I’m looking at is near term violations of vibrational points that if they would’ve triggered, the market would be going down by now. For instance, the high in the NDX in 8027 back on July 26. By last Thursday it was getting tired at 28 days off that top. Since it was also 618 weeks, that was an incredibly good opportunity for the 618-week to validate. But today is the 32nd day off the July peak and the NDX printed a higher high. I know we are micromanaging, but these are natural signals from the market, not some black box. Bottom line for now we are on a bullish violation.

Wednesday was 9/11 so I wanted to give you a bit of information you aren’t likely to get anywhere else. What was the Kairos point on Sept. 11, 2001? The NDX peaked two weeks after the NASDAQ. That small difference made all the difference in the world. By the end of business on Sept. 10, 2001, the leg that began on May 22, was 77 trading days. As it turned out, that was also the 77th week off the top (see charts below). 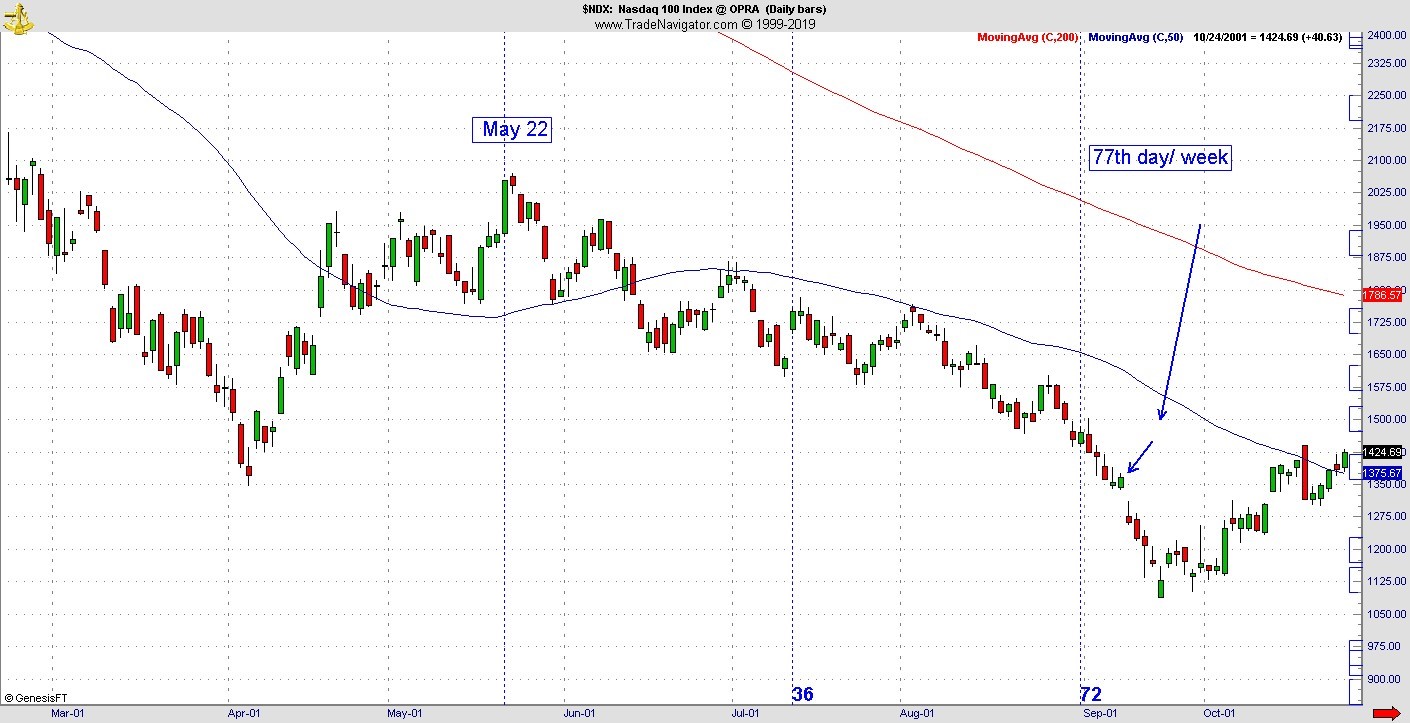 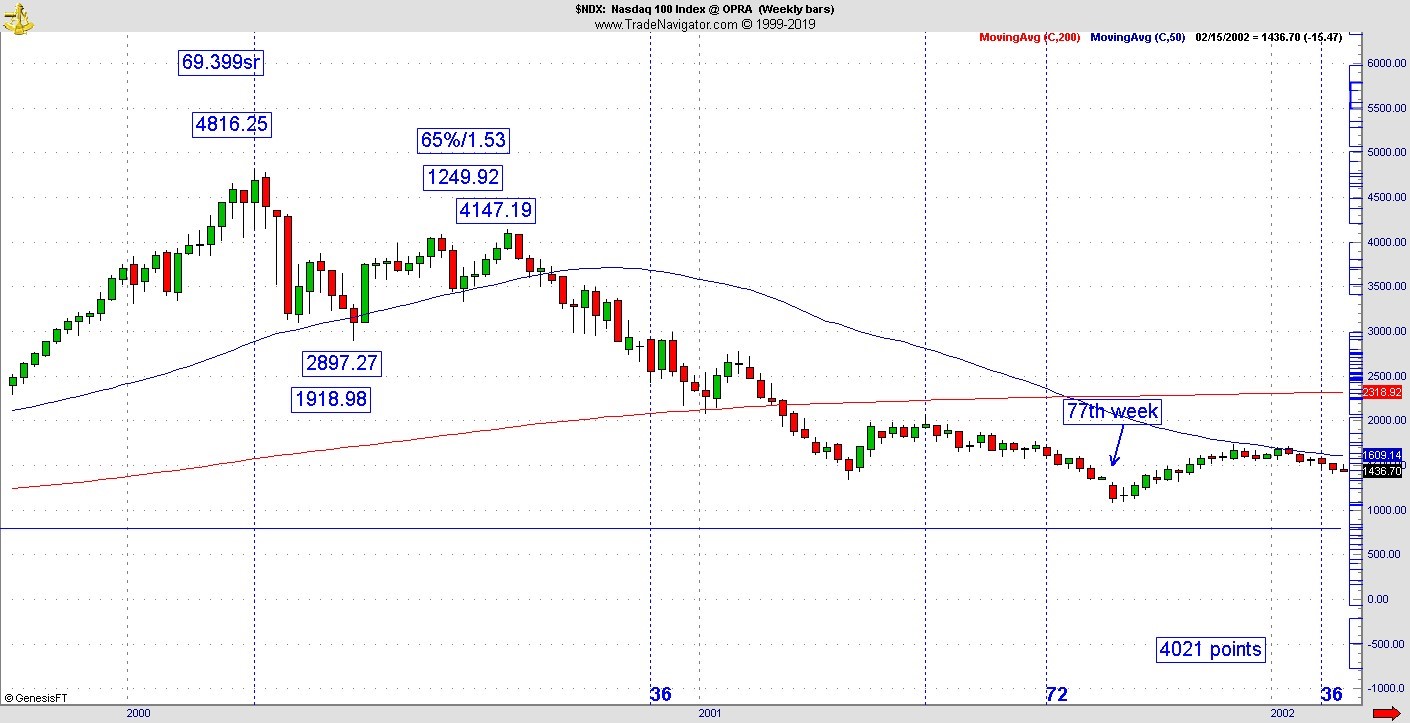 I know people have been short this month just because of the history September brings to the party. To use a sports analogy, two teams can play 10 times and team A could win the first 9 games but that doesn’t guarantee they’ll win the tenth. September’s bearish record isn’t that good but if the setup is not there, it’s not there.

From here, it’s best to take it one step at a time. Let’s continue to watch oil and see if this nice-looking setup in the NQ can sustain.

Declare Your Independence from Lousy Yields & Lousy Investments!
16 hours ago

I love the Fourth of July holiday almost as much as I love Thanksgiving. It’s a time to get to...

The American Dream is Alive and Well
16 hours ago

Equity investors know that the third quarter is typically the most challenging of all four quarters ...

These Biotechs are Seeking Treatments in Oncology
17 hours ago