The cyclical time sequence has not closed on the recent major market moves. There is a chance it is a new bottom to buy or the beginning of the end, writes Jeff Greenblatt.

With the Dow Jones Index down 800 points last Wednesday the possibility developed there was too much bad news in the air to continue the downtrend. Instead of a premature high, the 161-day window to the December bottom created a low. This was a possibility all along, but cycle season is not over.

Now we get to endure what in normal years would be paint-drying season. This is the low-volume period at the end August where people take their final summer vacations before the kids head back to school. The equivalent of this time of year is holiday trading period from Christmas to New Year’s Day. In a normal year, not much happens during this period. Consequently, three out of the past four sessions have been green and some of the geopolitical news has gone into remission.

But the situation in Hong Kong continues to get drawn out so risk is still very high. Even as last week was 618 weeks off the Dow/SPX 2007 high, with a one-week margin of error anything can still happen going forward. It’s just not as likely until right after Labor Day.

One of the indications we have for a low can be found in the psychology of the bars. Recall a week ago Tuesday the market was up big when President Trump delayed/mitigated the effect of the tariffs. The next day they jumped off the cliff. Some are saying it took the intervention of the plunge protection team to save the market. It doesn’t matter because when the market is truly ready to fall there is no power on Earth able to save it. That being said, if we were truly in a bearish environment, these charts would not be able to recover even the lows of last Tuesday. Why? Because anyone who bought that day was quickly underwater and if they truly wanted to just get out and breakeven, they would’ve done so already. As you can see on my Dow chart (below), that horizontal line at Tuesday’s low wouldn’t be pierced and the next leg down would already be gaining momentum. But that did not happen, they got all their losses back and then some. The reason being it happened right on a key time cycle point. This one turns out to be bigger simply because of the 618-week aspect going back to 2007 where the tech charts peaked three weeks later. The drama continues. 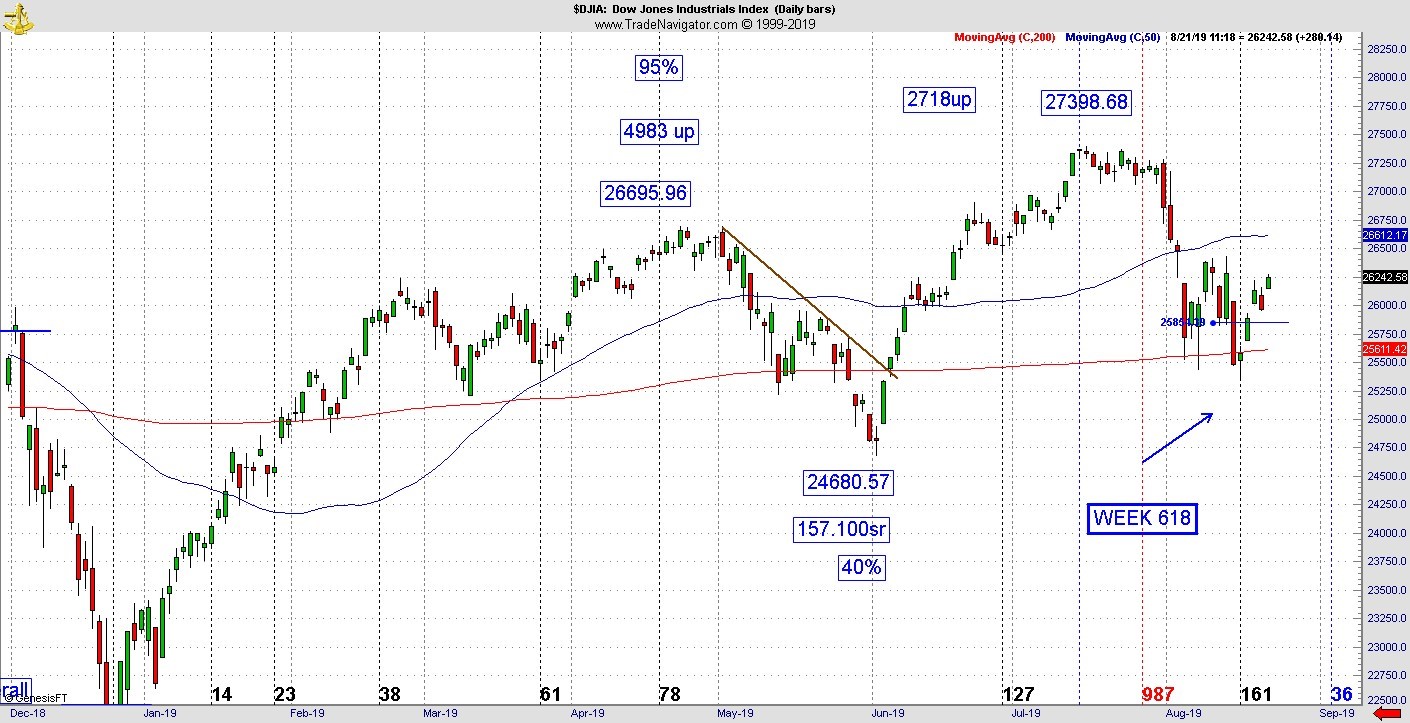 Monday was good, Tuesday fell back but Wednesday recovered. There certainly are crosswinds to close August. On the one hand we have an excellent reading in the NYSE Arca Oil Index (XOI) for a low right here at 80 days down and an 81% retracement off the December bottom, which just so happened to hit also at 161 days (see chart below). At first glance, given we already have the reaction, it would seem to be very hard to get a bear leg anytime soon if oil stocks start to take off. Here’s the problem, the U.S. 10-year Treasury note and 30-year Treasury bond have turned up again in terms of price. That means the crowd will take notice again soon and start to worry about the inverted yield curve. Since the Aug. 15, when the stock market bottomed, bonds have come off their highs and the emotions went back in the freezer. But those highs could be challenged within days. Who is going to win? Is it going to be better oil prices, which some also see as an economic indicator, or is it going to be interest rates? 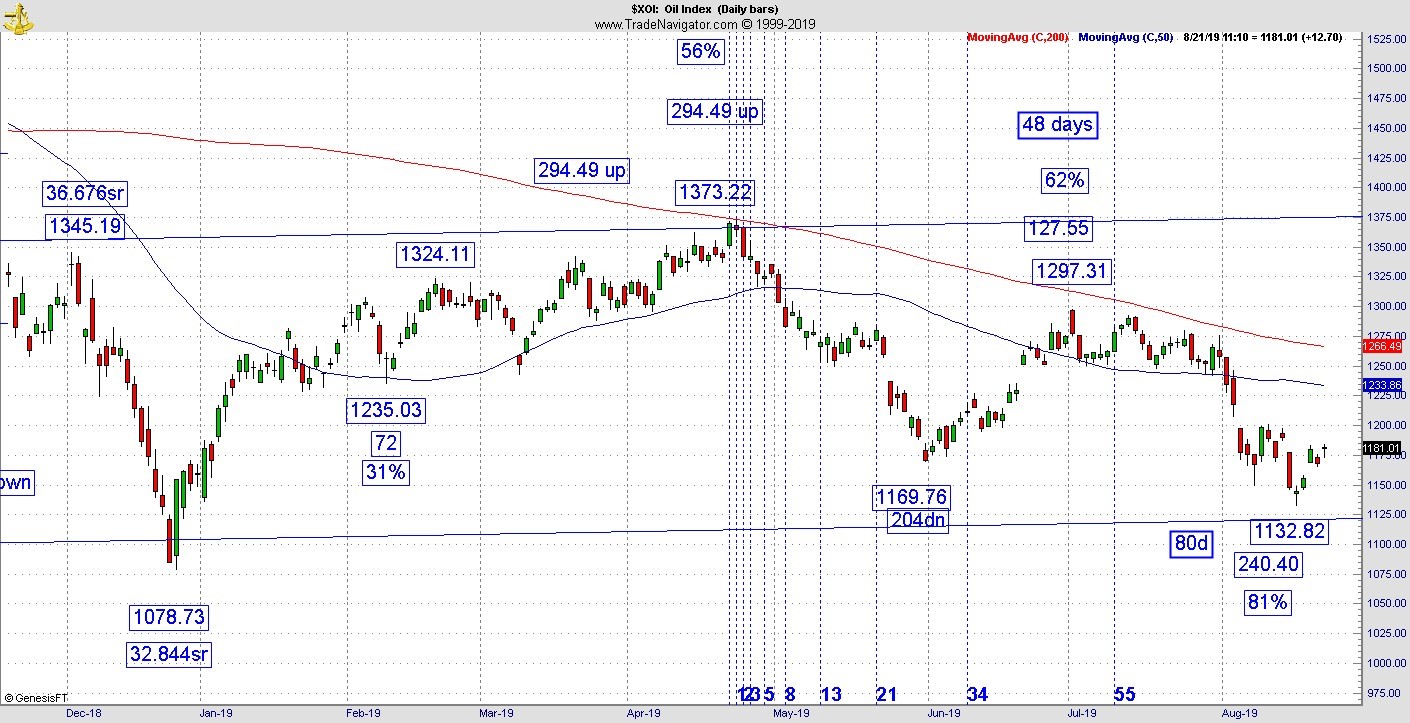 For right now, that means we have the potential for cross currents, which could be why one day stocks indexes are down and the next day they’re right back up. Under one scenario, we could have this type of choppy action right through the end of August. Now let’s add a wild card. Gold prices are also moving sideways right here in sympathy for the season, but ultimately now in a confirmed longer-term bull, could rise at any time. One must wonder what would be the psychological match that could light the fuse which would propel gold beyond recent highs?

On the surface it doesn’t appear like much is going on, yet when we look under the hood, we find lots of interesting scenarios materializing. September should be fun.