Bitcoin on Brink of a Big Bearish Breakdown

Bitcoin is near a key technical support area, if it is take out, it could lead to a breakdown that could take the rest of the cryptocurrency asset class with it, writes Matt Weller.

As Facebook (FB) CEO Mark Zuckerberg takes the stage to defend the company’s proposed Libra cryptocurrency, the rest of the crypto-asset market is taking one on the chin.

As is often the case with the nascent asset class, today’s broad-based selloff appears to have little in the way of a fundamental catalyst, but there were certainly technical signs that a big move was likely.

One effective way to identify the potential for large moves is to use a variation of the Bollinger Band indicator. Invented by John Bollinger back in 1980s, Bollinger Bands have become one of the most popular technical indicators today. For the uninitiated, Bollinger Bands consist of a moving average center line, with upper and lower lines set two standard deviations above and below that line. These bands create a price envelope that follows an instrument’s price up and down over time, expanding and contracting in response to the underlying market’s recent volatility.

Market volatility tends to be cyclical, meaning that markets alternate between periods of large trending movements and small rangebound trade. When the Bollinger Band Width (the distance between the upper and lower band) contracts, it creates a Bollinger Band “squeeze” setup, suggesting that the market is poised to see a breakout and a return of volatility.

In Bitcoin’s case, prices have spent the last month consolidating in a tight range, reminiscent of the sideways trade we saw from mid-August to late-September. Similarly, the Bollinger Band Width dropped to just 8%, an abnormally low level (for Bitcoin at least). With price breaking out of its range after the prolonged contraction in volatility, a strong selloff from here is a distinct possibility (see chart). 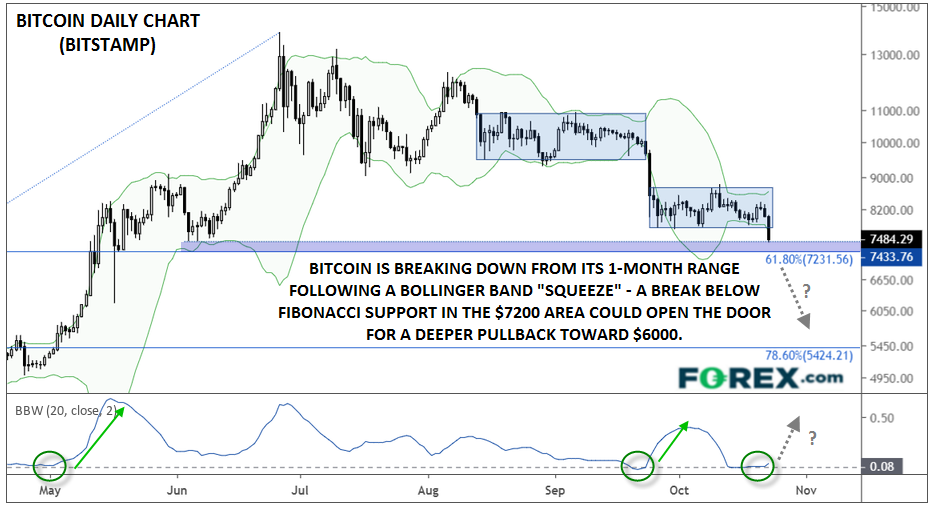 As for the key levels to watch, the June low and 61.8% Fibonacci retracement of this year’s rally converge in the $7200-$7400 area, so bulls do have a clear area to make their stand. If that potential support area is broken, Bitcoin could quickly fall toward $6,000, likely dragging the broader crypto-asset market down with it.