“Whenever you find it easy to do something, [its likely because] institutions are eager to do the opposite,” writes Al Brooks.

Bitcoin has a minor bottom and should fall below $7,500 within a month.

The Bitcoin cash index daily chart collapsed below $10,000 two weeks ago (see chart below). I wrote on Aug. 24 that $10,000 was fake support and that Bitcoin would probably have to test $7,500 before strong buyers would look to get back in. It was way too easy to buy with limit orders at $10,000 for three months. 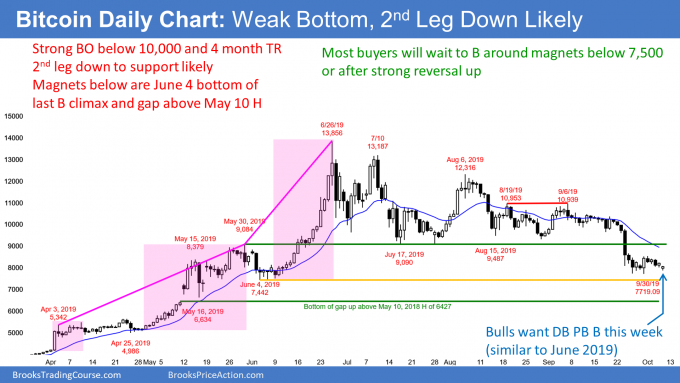 Traders should always assume that an institution is taking the other side of every trade. Why? Because they are 95% of the volume in most markets. That is not yet true in Bitcoin, but it is true enough.

Whenever you find it easy to do something, [its likely because] institutions are eager to do the opposite. The result is that you will typically lose money. “Good fill, bad trade.” This is a good example.

Whenever a market hits a price four or more times in a trading range, that price is a ledge. When there is a ledge on the daily or weekly charts, there is a high probability of two things: A chance of a break beyond the ledge or a pullback through the ledge breakout point. That pullback usually comes within 10 to 20 bars, but it can come sooner or much later.

There was a ledge bottom at $10,000, which was psychological support. That is now resistance, but resistance is a magnet. Traders should expect at least a small test above $10,000. It will probably come within a couple months, but it might take many months.

Once the market gets back above $10,000, traders will then decide if there will be a continued bear trend or a resumption of the 2019 rally. If there is a rally, traders will see the break below $10,000 as a bear trap in a bull trend.

Whenever there is a reversal from a buy climax (like in June), traders expect a test of the bottom of the most recent leg up. That began with the June 4 low of $7,442 and that is why I said that Bitcoin was going to fall below $7,500. This is despite the pundits claiming that the four sideways months was forming a base that would lead to $20,000, $50,000 or even $1 million.

Reversals from wedges often go to the start of the wedge, which is the December low of $3,135. While possible, that would indicate that the bull trend is over. Unless it falls there, the selloff is still more likely a pullback from the 2018 rally. Therefore, there will probably be at least one more rally to above $10,000 within three to six months.

The bulls want the rally to be the resumption of the bull trend. However, that rally would be almost as likely to be a bull leg in a trading range that could last for years.