Here is a potential income generating trade in the SPY, from Jay Soloff.

Although the market has been extremely volatile, it doesn’t mean investors are only looking at directional trades in which they try to make money on big market moves. There are still plenty of ways to generate a regular income from investments.

Of course, dividend stocks are the primary form of income generation through shares. Dividend investing has become increasingly popular as fixed-income yields have continued to trend lower. While some high-yield dividends are at risk in this market environment, the vast majority of steady-paying companies will continue to pay out every quarter.

What about owning a basket of stock or an index? Can you still generate a dividend from a broad-based investment? Most stock index exchange-traded funds (ETFs) do pay a dividend, although it generally doesn’t offer an incredibly high yield. For instance, the S&P 500 ETF (SPY) currently pays a 2.1% yield (estimated).

SPY is the most actively traded ETF in the world. Many investors hold it in their portfolio for their allocation to U.S. stocks or large-cap stocks in general. Is there a way to do better than 2% per year in income while holding SPY?

That’s’ where options come in. More specifically, that’s where covered calls come in.

By owning SPY and writing (selling) calls against the shares, investors can generate an additional income stream while still sharing in some upside market potential. In a volatile market, as we have now, the calls can be written for a nice premium while still offering reasonable capital appreciation.

An excellent example of this type of trade is a huge position initiated just this week. A large trader or fund purchased several million shares of SPY for around $272.50 while selling more than 60,000 June 300-strike calls. The calls were sold for roughly $4, which works out to a total of approximately $25 million collected in premium.

This position will generate a 1.5% yield in about 10 weeks, which is nearly 8% annualized. That's a solid annual yield in an environment where government interest rates are essentially zero. Plus, the trade can still earn $27.50 in upside appreciation in SPY before the gains are capped (see chart). 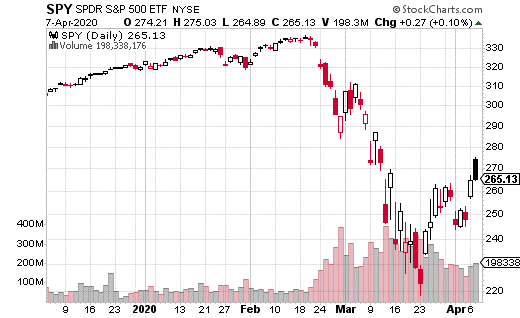 Does this mean that the smart money doesn't believe SPY is going back above $300 before June? Or does it suggest that we won’t see much more downside over the next few months?

I don't think this trade is a signal. Instead, this is likely a covered call fund or strategy that places these trades every quarter or month. It's likely a mechanical process rather than some specialized timing.

That being said, it's a reasonable trade to make if you want to own SPY and would like to generate additional income. Just be aware that a covered call will only lower your basis by the amount of the premium collected. Beyond that point, the risk is equal to owing SPY shares outright.

I love getting those alerts. The ones that come in via email saying something like: “Your acco...

If you’re relying on your portfolio for income, monthly dividends are a godsend, because manag...