The price of gold is soaring for the first time in more than five years as investors have begun stockpiling safe-haven investment vehicles. Bonds, gold, silver, Japanese yen and other safe haven assets are seeing a significant uptick in demand as the global economic picture becomes murkier by the day.

What’s interesting is that the economy is nowhere near the brink (of a disaster) like what we experienced in 2008. Sure, a recession is probably imminent. However, there’s a difference between a recession and the Great Recession of 2008. I certainly don’t see a banking collapse on the horizon—or the massive inflation expectations created by aggressive Fed intervention following the Credit Crisis.

That’s not to say we should ignore the signs. I don’t recommend piling into aggressive growth stocks right now. Between the trade war, the yield curve, and the deteriorating economic conditions, it makes sense to be wary.

Gold, in particular, seems to be attracting a lot of attention in the era of negative interest rates. The price is up more than 21% year-to-date and 9% for the last month. In comparison, the S&P 500 is up about 14% year-to-date but down 5% this past month.

Let’s take a look at an interesting block trade in SPDR Gold Trust (GLD) options to see if we can find some clues. GLD is the most liquid gold ETF and possibly the most popular way to invest in gold.

An institutional trader purchased an Oct. 18 call ratio spread in GLD, which establishes a very strong bullish position. More specifically, with GLD at $145.50, the trader bought 5,000 146 calls and simultaneously sold 10,000 160 calls, both in October. The total cost of the trade was $2.25.

If GLD closes below $146, the trade loses all the premium paid. However, since this is a ratio spread, there is unlimited risk potential on the upside (above $160) because half the calls would be naked above that level. (The other half is covered by the 5,000 long 146 calls.) 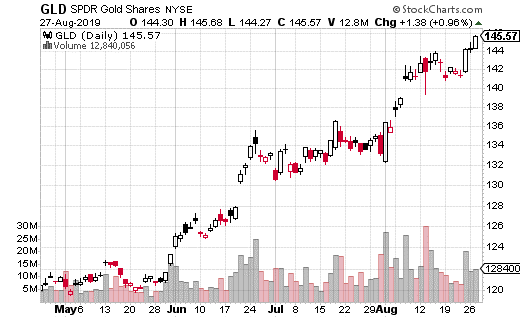 These large ratio trades are only done by institutions and funds due to the unlimited risk involved. Whoever made this trade believes gold has as much as 10% upside potential, but not any more than that. In other words, they are willing to risk a quite a bit that gold is going up, but within a 10% window. The reason they use the ratio spread is to substantially lower the premium cost of the trade.

Clearly, you shouldn’t make this sort of trade from home. Ratio spreads are best left to professionals. However, if you are bullish on gold, you can do a similar trade using a standard 146-160 call spread in GLD and have a defined limit to your risk. Or you could use a narrower spread to lower the premium costs as an alternative.

ED: The larger question is, what does the trader see. Apparently, he sees more market uncertainty driving gold higher but with an end in sight. Gold has rallied quite a bit already, especially given that we are not yet in a recession and there are no strong signs of an uptick in inflation. Perhaps it is a sign that you should tighten up your stops in gold if you are long.

The seasonal low in lean hog futures is due in the coming weeks and with the U.S.-China trade deal s...

Will crude and gold decouple? Is US-China Phase One a non-event? Will Fed repos create bubble? Jeff ...

Since 2008, when it first went public, Franco-Nevada (FNV) has outperformed gold bullion and gold eq...

A global renewable energy revolution is underway. The key driver has been the steady rise of carbon ...