Last week I discussed two major issues intermediate level traders need to overcome in order to get to the next level. Basically, we talked about the reasons traders overstay and understay their welcome, recalls Jeff Greenblatt of Lucas Wave International.

If you think there is only one way for the market to go and that is up, that’s not trading.  Anyone can put on a winning trade, it’s tougher to keep the winnings. We are a generation of traders who have now participated in numerous stock market bubbles, not to mention an earlier season for precious metals and real estate. Precious metals went from $250 to nearly $2,000 in the first half of this century. The fact it went too far too fast was a major reason it corrected for nearly five years.

The group of traders that doesn’t seem to be concerned about every point gained and usually stays too long has a belief system birthed in the idea the market always comes back. If you’ve ever traded for income, you know that’s not true. Back in the old Internet bubble go-go days, the term momentum trader became extremely popular.  Stocks defied gravity and everything went up. That’s precisely why momentum traders have an easier time entering trades. But it’s not what you gain on paper, it’s what you take to the bank that counts. Developing momentum traders have issues exiting from winning positions. The greed part of the equation takes over. The corollary is the longer you stay in a trade and get away from discipline, one crosses the line into gambling.

If you are in the trade for any other reason aside from knowing and managing your edge, you could be gambling. That means if you are in a trade, run into adversity, and start hoping you’ll breakeven, that is gambling. There are more people using trading as a gambling outlet. You should have some butterflies when entering a trade. If you don’t have them, consider you don’t have enough respect for the market or what can go against you. The other extreme is having too much anxiety the fear blocks you from taking positions even as you know it is the right thing to do. There is a fine line of too much confidence or not enough.

If you overstay the momentum part of the trade as the pattern goes against you and you have no game plan to figure it out, you could be gambling. Traders will tell you they never gamble. The truth of the matter, everything is a gamble. Have you ever done business game planning? Good decision makers place probabilities on certain events materializing. The NHL just agreed to a new collective bargaining agreement. They are projecting what the business community will be like over the next two-five years. They may turn out to be wrong, but at least they have a vision of a scenario.

The same thing is necessary in trading. Poker players have a good idea of the probability of pulling their hand. In trading, we must look at our edge whether it’s a calculation, the distance to support or resistance or the characteristics of the market. Based on your level of experience will you be able to develop the discipline to stay in a trade long enough to pick up easier to get points without giving it back? But it’s not easy to get into trades where the best part of the move is already developing, the pattern moves too fast. What usually happens is the winning trader has been able to rewire their mind to enter in the psychologically difficult points on the chart because their edge has materialized. The difficult part is hanging on until such time the pattern does break free into the best part of the move. You may figure out there is an edge before the competition figures it out, but you’ll still need to the big money to develop a wave that will carry you on to victory. If you are good enough to get into the momentum part of the trade, consider using a trailing stop to let the market take you out. That takes a potentially emotional decision out of your hands.

It’s September and the market is getting hit. This shouldn’t be a surprise. There are so many issues and now the market has a new threat. As if we didn’t have enough to worry about, Supreme Court Justice Ginsburg passed on this week. If you’ve been following the politics, you know the situation was completely reversed four years ago. We had a Democrat president and a conservative Justice (Scalia) to be replaced. The GOP wouldn’t allow it in an election year. With under two months to go, the GOP and Trump have decided this will be their line in the sand. This issue needs to be watched on many levels, but in our work, we need to be concerned the next black swan could develop out of this.

Briefly, we knew the greenback wouldn’t go straight down. It has been in rally mode all month and has recently broken the downtrend line and technically has improved on this rally leg. The stock market is awfully close to breaking down. If the Dow breaks the recent low set earlier this week, chances are high it tests 25,000 with the potential for even lower prices. This is the time of year for it to go. Aside from the policies of the Fed, there is not one reason to justify the stock market even 1 point higher. 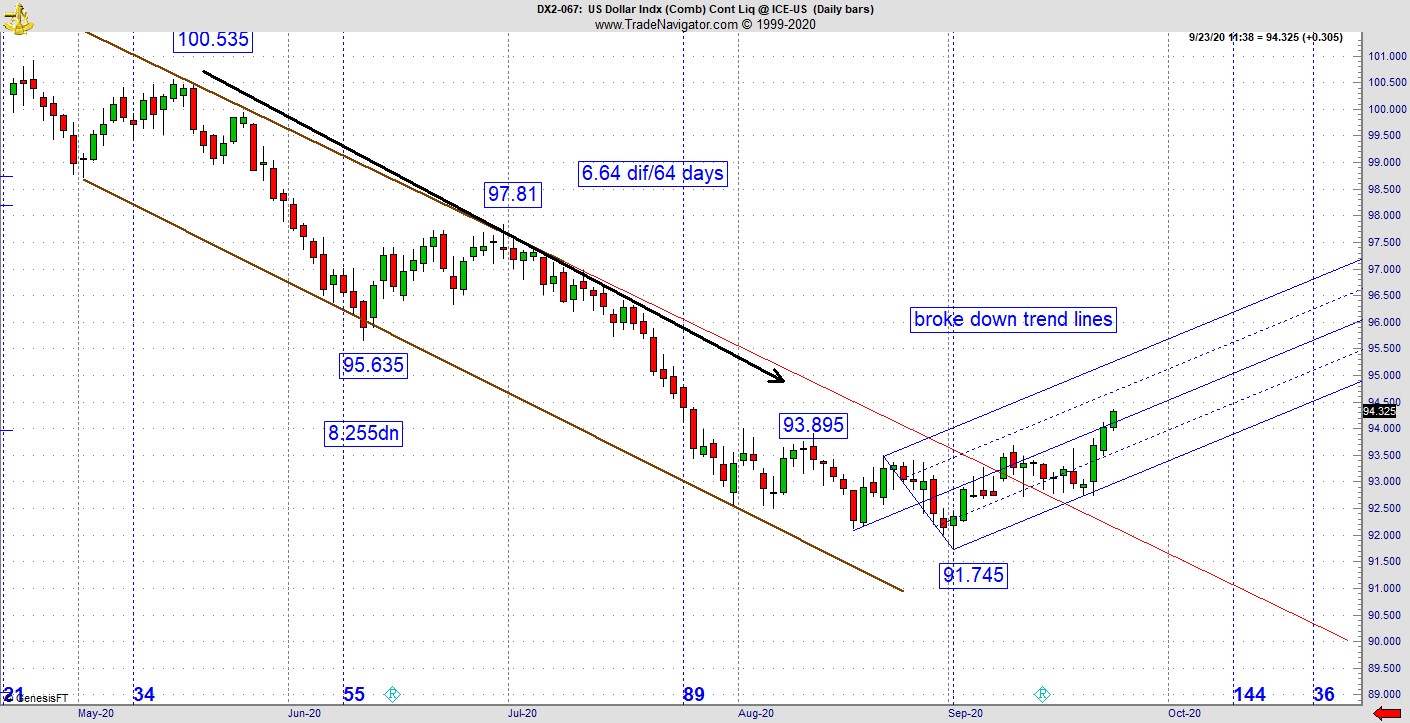 What does that mean to our theme? Three stock market bubbles over the past 22 years. The era of stock market bubbles is likely over. The Fed won’t be able to keep the balloon inflated forever. Traders who will prosper in this decade will need to know when their edge materializes and have the courage and conviction to stay long enough to get those good points. Then you’ll need discipline to exit and keep those points.

We’ve discussed the reasons why traders over or understay their trades. It’s a matter of knowing your edge and to participate when it appears. The enemy of the trader is fear (understaying) and greed (overstaying). Have an idea of where you would like to exit before you enter. If you are entering near support, pick a realistic resistance point. That’s half the battle. The rest is developing your conviction to reasonably stay the course until you get near the target.

Moving average crossings are widely used for momentum investing and the golden cross (GC) is the mos...

This week’s headline risk comes courtesy of the Old Institution and their obsession with &ldqu...