Often the best trading opportunities are not the obvious one and takes fortitude to pull the trigger, explains Jeff Greenblatt.

I have a few issues in my bag of tricks this week. We’ll do a trading lesson, then we’ll talk about the cycles and we have to discuss geopolitics. What is the number one obstacle standing in the way of a developing to intermediate level trader?

I’ve seen some trading coaches show certain moves develop and they tell you when you see a setup like that, you ‘have to do it.’  The move could come as a result of a Gartley or some setup from a signal like MACD. You know what ‘have to do it’ means. Feel the fear and do it anyway. What they are telling you is success comes from taking trades from some of the most psychologically difficult points to enter. Of course, they are right but who likes to come to work every day and perform under the most stressful conditions?

Is it any wonder the success rate for traders is so low? Many traders take trades in places on the chart where the move has already established itself and its basic human nature to enter when it starts to ‘feel’ more comfortable. The problem is when you do that the pattern sooner as opposed to later comes right back at you. Then you become like a deer in the headlights.

Am I resonating with some of you? I had a conversation with a client just the other day and he told me I “completely nailed it.” I know, because I used to suffer the same way. We all know taking trades at comfortable places on the chart doesn’t work yet we do it anyway. So why do we do it? In all of his Socionomics books, Prechter talks about the herding impulse. Well, he’s completely nailed it as well.

So how do you break away from that? I’ll talk about my methods called Kairos but there are others. It’s a process of renewing your mind. This NZD-JPY on a weekly chart no less is a great example (see chart below). Imagine a high and a steep retest of the top. Do you think it would be psychologically difficult to take the trade by the time it started rolling over near the high? Do you, or don’t you?  You are not sure and might be hoping and praying it works. No method is foolproof but the idea is to understand an edge that gives the trader some conviction. In this case, there is an 83% retracement which squares out with the move up of 8.35. Yes, this is the kind of chart I featured in my recent master class at New York Traders Expo. Did you know that retracement values square out with the price or the time? 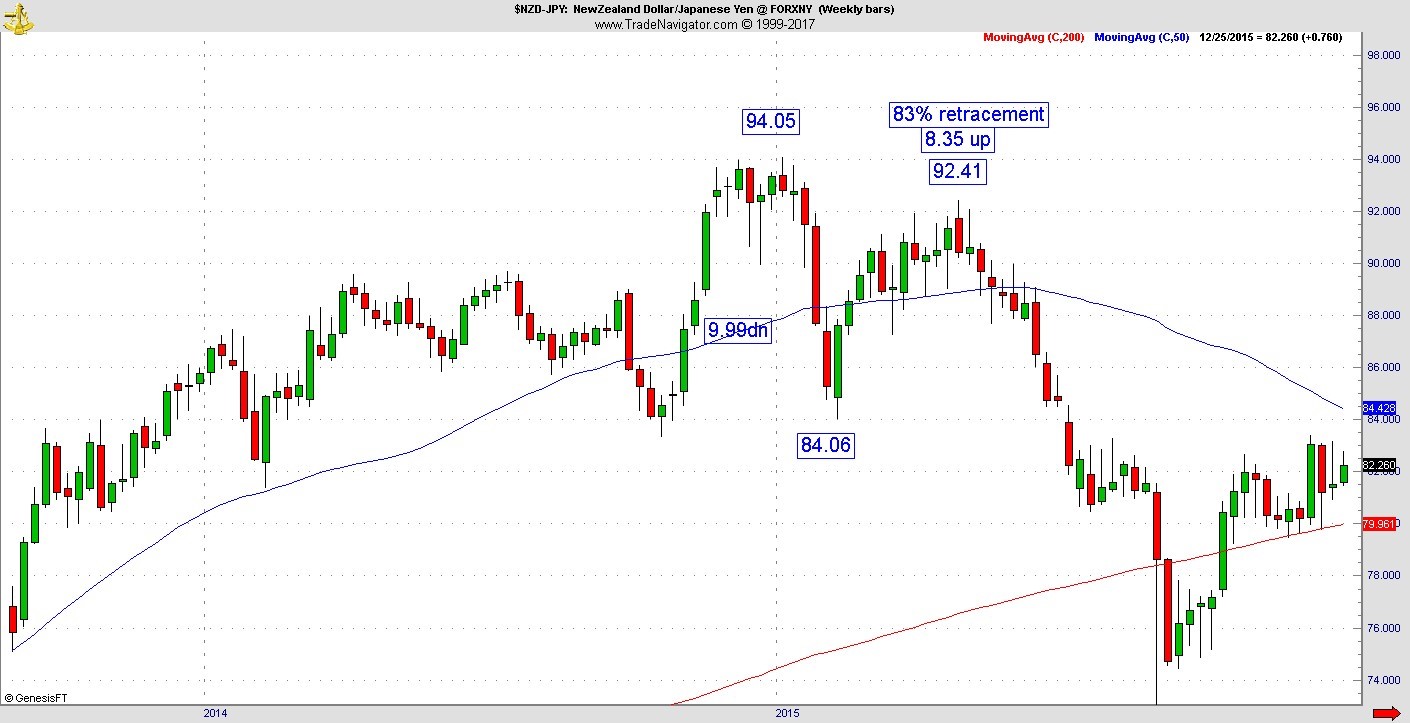 Can you get the revelation that when you are armed with this kind of information, it makes taking a trade like this less fearful? When you study charts where you have a definite edge, your mind changes from fear to realizing opportunity. It doesn’t have to be Kairos.  Have you seen the movie 21 on the MIT blackjack team? The protagonist Ben goes through a training process to understand what his edge was. Then he became psychologically ready to be the big player and do things the ordinary person would be very fearful of doing. Realize that blackjack is gambling to most, but when you undertake a strict discipline and stick to it, you end up with a mathematical edge. It becomes a business. Successful trading is the same way.

Have you noticed that while the market is still going up, the bullish days are only manifesting small green candles? We don’t see big down days nor do we see those big 400+ days up in the Dow anymore either. Wednesday the Fed left rates alone and it finally appears rate cuts are baked into the cake. No big reaction for the charts. In fact, the bias was down. We’ve talked about being late stage four-year cycle for the bulls. Today is May which means we are on the back end of the bullish wind for a while. Does it also mean sell in May and go away is going to kick in?

If we go back to October when cycle experts like Eliades started talking about it, the bulls have only kicked four field goals while the bears rang up a touchdown through the end of 2018. The best part of the cycle hit and the bulls are only slightly ahead. That’s why I’m suddenly concerned about geopolitics. How many of us realized that when we signed up for trading, we were going to have to deal with potential game changing historical events? I woke up yesterday to see chaos erupt on the streets of Venezuela. This drama has been playing out for months. It appears to be coming to a head. It’s impossible to predict how these things will turn out. But I heard the President warn the Cubans to back off lest they want to see a complete embargo and sanctions of their island. Wow, that’s huge! These are fighting words. How many of you think the market is going to stand by and continue in its complacency if the most serious scenario in Venezuela were to play out? If something does happen, it won’t have the safety of the best part of the bull cycles to protect anymore.

Geopolitical risk had gone into remission in recent months but its starting to wake up again. How to deal with it? There is no Holy Grail answer for that. What I can tell you is be on top of your game. But let’s reduce it to the ridiculous. Let’s say you are on the freeway and there is road construction. As traders we are on a path as well. Don’t they tell us to take a detour and go around the construction? As traders we’ll have to work around any geopolitical risk. How do you do that? Its possible if and when something develops, you’ll have to change your time frame, If you trade daily charts, you might consider 30-60 min charts for a while.

Most importantly you should seriously consider the second half of 2019 won’t be as market friendly as the first half.