The rise of U.S. shale has changed all the rules for crude oil and trading around hurricanes, writes Adam Button.

The U.S. dollar is up across the board, while British pound (GBP) is at new 2019 lows on fears of a no-deal Brexit despite the strongest rise in UK earnings/pay in more than 11 years.

An important U.S. data report is due shortly, followed by several Fed speakers including Chairman Jerome Powell. Will Powell's speech present new resistance to the U.S. dollar as it did last week?

The rise of U.S. shale has changed all the rules for crude oil and trading around hurricanes is no exception. Commodity Futures Trading Commission Commitments of Traders (COT) data showed an increasingly crowded GBP trade. 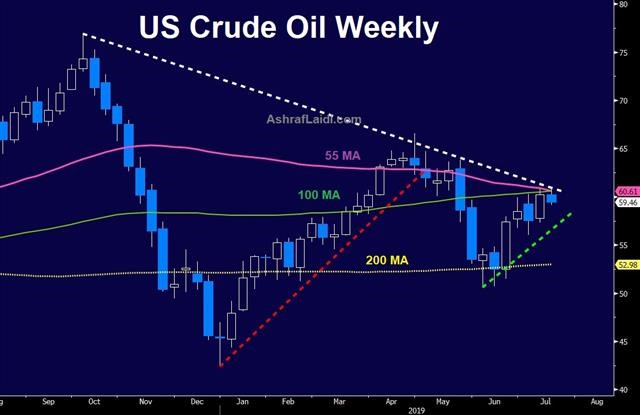 WTI crude rose to the highest level since late-May last week as it climbed above $60. There was some concern heading into the weekend with Hurricane Barry threatening the Gulf coast. It ultimately made landfall as a Category 1 storm and underperformed most forecasts.

The start of hurricane season is a fresh reminder that old rules for U.S. crude may not apply. A decade ago, the U.S. imported roughly 5 million barrels per day of crude via the Gulf coast that meant that any disruption due to storms would leave the market undersupplied and prices would rise.

But due to the shale revolution, Gulf net exports are now roughly zero. That could leave glut points and drive down prices, especially if refineries are forced to close. At the same time, there will still be offshore production shutdowns so global supply could be curbed, but the mechanics are no longer nearly as straightforward as they once were and the trade is often to fade any storm-related spikes.

Speculative net futures trader positions as of the close on Tuesday. Net short denoted by - long by +.

The general theme over the past few weeks is U.S. dollar longs headed to the sidelines but that's not the case in the pound as specs bet that whatever is troubling the United States will be overshadowed by relentless Brexit uncertainty.