Shake Shack Shaken, But not Stirred (or Down & Out)

Recent weakness in Shake Shack has pushed into a strong technical level that can be exploited with options, writes Elizabeth Harrow.

It's been a tough week for Shake Shack (SHAK), the fast-casual burger chain based out of New York City. A disappointing same-store sales forecast on Monday night triggered a wave of Tuesday morning price-target cuts, and SHAK ended the post-earnings session 20.6% lower. That massive daily drop was Shake Shack's worst trading day on record.

What brought SHAK to our attention today, though, was its sudden proximity to its 80-week moving average at $64.50, as displayed on the accompanying chart. This reliable buy signal was covered in this space roughly 11 months ago, shortly before the shares hit their late-December bottom. And as of this writing, for what it's worth, SHAK is even more deeply oversold than it was back then; its 14-day Relative Strength Index (RSI) finished Tuesday at 19, compared to a low of 25 back on Christmas Eve.

According to updated stats from Schaeffer's Senior Quantitative Analyst Rocky White, there have been three previous instances of SHAK pulling back to test support at its 80-week moving average after a lengthy run above this trendline (see chart below).  The stock has been higher four weeks later 100% of the time, with an average return of 6.75% for this time frame. And looking out three months after a signal, the average return widens to 27.92% (again, with 100% positive returns). 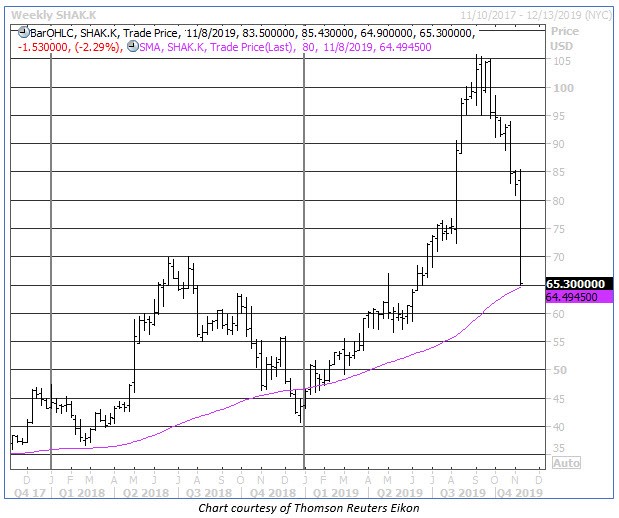 If SHAK can establish its footing around multi-layered support in the $65 region, there's plenty of pessimism priced into the shares that could potentially unwind to fuel yet another bounce from this technical support. A healthy 17.2% of the security's float is sold short, representing 4.7x SHAK's average daily trading volume. In other words, a short-squeeze rally could take nearly a week to play out in full.

And despite the initial flurry of post-earnings price-target reductions, most analysts are already bearishly inclined on SHAK. The stock has garnered only three "strong buys," compared to nine "holds" and one "strong sell." This indicates minimal risk for a continued downgrade cycle to apply heavy selling pressure.

Elsewhere, options players have amassed a major put position at nearby strikes. The front-month gamma-weighted Schaeffer's put/call open interest ratio (SOIR) stands at 3.22, indicating that puts more than triple calls among standard near-the-money November options. This leaves SHAK well-positioned to capitalize on options-related support in the immediate days ahead.

While traders should wait for confirmation that SHAK's sell-off is set to taper at the $65 level (via a few daily closes above this area), now is a great time to buy call options, as the post-earnings implied volatility implosion has left premiums at relatively attractive levels. Trade-Alert pegs the equity's 30-day at-the-money implied volatility at 38.4%, in the modest 36th annual percentile.