Dow Holds on to Set up Santa Rally

As I wrote in a prior update, I was somewhat bullish despite the Transports putting in an upper tail and the Dow putting in a decent-sized red bar. We needed to get a close above the high from November 16, which was 29964.29, explains Jeff Greenblatt of Lucas Wave International.

With the gap up last week, the Dow accomplished that. Transports look okay while the Russell 2000 is once again leading to the upside. If I could pour cold water on anything, it’s the Nasdaq 100 (NDX) which is lagging. Given the time of year, this market is setting up for a Santa rally even as it could turn out to be slim pickings. This is not the time of year where we expect a big drop.

But 2020, the least favorite year for millions of people isn’t an ordinary year and anything can still happen. As I told you last week, my main concern is for January which is setting up to be a historic month. As far as the election is concerned, anything is still possible. I told you two weeks ago nothing was decided. Trump did authorize the GSA to work with the Biden transition team. Many are reading the tea leaves and believe this is the unofficial concession. I’m not so sure. That famous philosopher Yogi Berra was famous for saying, “It ain’t over until it’s over.” You know me, I always use sports analogies. How many times have you turned off a game that appeared to be a potential blowout or there seemed to be no way your team could win the game? Then they win in the last minute. Yup, that happened to me earlier this year with the Arizona Cardinals.

So, I learned and the next time they were behind I didn’t turn off the television and they won on the last play of the game. All I’m trying to tell you is the legal wheels of justice have yet to play out. Watch the middle of December when the electors meet. We could get a massive reaction right there. But if you are long, you need to watch the market every day and be sure to keep a trailing stop. Yes, a stop loss might not trigger where you’d like in case there is some type of panic indigestion. The idea is to know your what your edge is and get in as early as you can. That way you get to put in a reasonable stop loss, and you won’t get hurt. For goodness sakes, don’t participate in dollar-cost-averaging in a market like this. Even as the pattern looks like it’s close to a breakout, a shake of the trees can materialize at any time. You certainly don’t want to chase a move down and add to a position when its going the wrong way. Only add to positions when you have a winner.

Let me show you what I have in mind. I do a lot of work with pitchforks. Here’s a classic situation where you would add to a winning position. This is a five-minute USD-CHF where we have a mild divergence, which positions the higher high in a weaker position in relation to the channel. 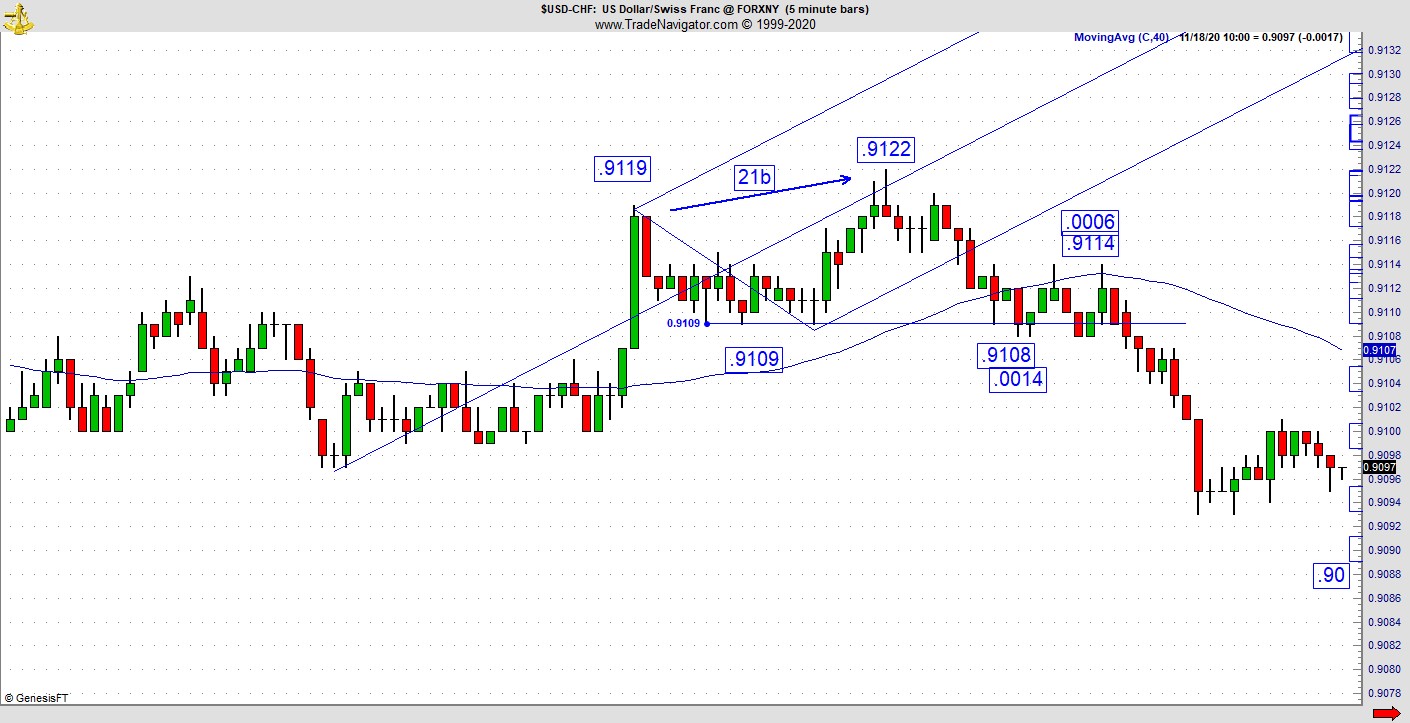 Getting back to this example, the high at .9122 is right at the midline, which means the action is not yet in the path of least resistance up. Also, with the .9122 pivot, its 21 bars from high to high. So that could be your sell signal as it takes out the bottom of the upper tail. We have a secondary high, which also has a Kairos sell signal. The drop is .0014 and the secondary is .9114 with a good reversal candle formation. Those more aggressive, have a high-probability short right there especially since it fell out of the bullish channel. If you are aggressive it could be a place to add to the position. If not, that would be the origination of a short trade.

The market is still going up, risk is very high, and the election is far from being decided. That being said, it’s important to understand where your edge is and capitalize on it. On a personal note, I’m adopting a year-old lab from a young man who is being stationed in South Korea in the military. If you are grieving your forever companion, the best therapy is to get another one. That’s why there are millions of dogs looking for good homes.

Toward the end of last week, the session was a consolidation as expected given the +3% V-shape bounc...

My second top pick in the Industrial sector is 3M Company (MMM). This is one the leading industrial ...