Yogi Berra: It Gets Late Early Around Here

This is a fluid situation. Last week we talked about the latest upcoming cycle points for this time of year. It could be the most important time of the year, explains Jeff Greenblatt of Lucas Wave International.

Right now, we are in the 233-day window from the bottom last March. Instead of a top, the NASDAQ could be finding a low. These readings could get blown out of the water by the time you read this.

If we are at day 233 of the rally now, the 261 window can’t be far behind. That day comes around April 5. Since we are at the first-time window for this season, reactions could start soon and as Yogi Berra said, it could start to get late very early around here. It’s only February, after all.

Before then we’ll hit the Gann master timing window for the year on the change of season in March. That’s where the COVID-19 bottom materialized last time. For those who think trends last forever, nature suggests financial markets do change direction close to or directly at the change of season. The Fed meets every six weeks but it’s the meetings near the seasonal change points that seem to be more effective.

Taking this one step further Congress is set to pass the $1.9 trillion stimulus package to be signed by Biden no later then March 14. If for some reason it doesn’t happen the stock market is likely to throw a major temper tantrum. I’ll go on record to state it will happen. But it's likely to be the last stimulus package the public will ever see.

All that being said, from what I see following and trading intraday charts, I believe markets will bypass this 233 cycle in terms of setting a high and continue to the bigger windows coming in March. Let’s look first at the Nasdaq 100 (NDX). 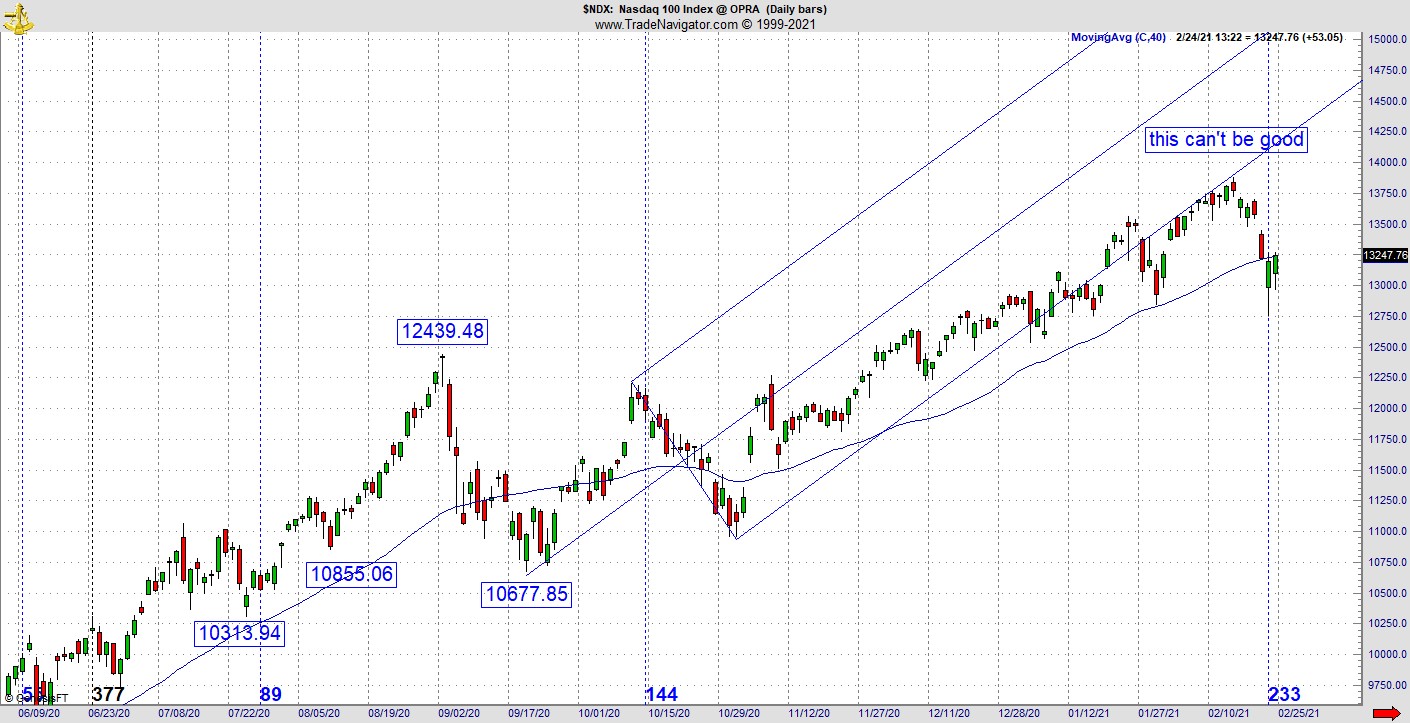 As you can see there is a potential inversion with the low at 233 instead of a high. However, when I put the channel lines on this rally, we see a weakening picture to the point it fell out of the channel. This condition can’t be good no matter what the cycle says. To be sure, falling out of the channel isn’t necessarily terminal to the rally. I’ve seen many patterns that look just like this that turn back up to retest the channel lines before failing completely. The stimulus scenario that keeps the market elevated thru at least the first half of March is slowly setting up right now.

I know all of you have read Duncan’s The Dollar Crisis by now so you realize government stimulus can put off the day of reckoning for months, if not years. By my count they’ve been putting it off since QE was enacted by Helicopter Ben. But lately they’ve been flooding the banks since the Repo crisis in September 2019.

There is a good chance they could put off any major selling for at least a few more weeks. In the end there is no power on Earth that can stop markets from falling once nature decides it's time to go.

I started warning about the bond market about a month ago. Instead of morphing into a consolidation because the action was venturing into the weakest part of the down channels. Instead of busting out of the down channel, it dropped, which is bearish. Right now, it has a chance to stall to the downside as it is 144 days down to the current sequence.

They are not in any danger yet but if the price action takes another leg down from here, the crowd is finally going to get concerned about higher rates.

In my weekly trading tips part of this update, I have no charts to show you today. Let’s talk about preparation. When the lockdowns hit last year and sports went away for those few months, I found myself watching old YouTube videos of the 72-73 Miami Dolphins. Why? Because I was there, which means I had a front row seat to sports history. I didn’t watch those games for over 40 years but since coach Shula passed, I watch all the time. What does this have to do with us?

The other day I saw yet another inspirational video. When Shula came in 1970, a lot of the pieces that would go unbeaten in 1972 were already on the team, yet the year before he got there, they still lost 10 games. In Shula’s first season they won 10 games. In 1971 they got to the Super Bowl and in 72 they were unbeaten.

How did that happen? Mercury Morris stated when Shula got there, he instituted four practices a day during training camp. For those who don’t know, in normal times NFL teams routinely practice two times a day during training camp. The players bought in to this type of preparation. I bought into it as well. Lots of developing traders spend too much time on social media or Netflix. Last week I talked about decoding the setups to be the biggest moves. When I see a chart with a big drop, I stop what I’m doing and work out the different price and time vibrations. I can’t tell you how many of those I’ve broken down but I’m to the point I can now recognize the move in real time.

You don’t have to do the equivalent of four practices a day but if you don’t, you’ll not likely to experience uncommon success. But that was only half the battle. For those of you who remember, the first Dolphins team that played in the Super Bowl got smoked by the Cowboys 24-3. Some of the players were only glad to be a part of the big game. But when they got so embarrassed in front of the nation, they felt awful. Shula wanted them to remember the feeling and made it the rallying cry the next season.

In fact, Mercury Morris stated when the team convened for camp the summer following that loss, Shula made them watch the film of that game so they wouldn’t forget how terrible they felt. They were looking for redemption. They never intended to go unbeaten, but they did. What is even more amazing is starting quarterback Bob Griese broke his leg in the 5th game and they played most of the rest of the season with backup Earl Morrall.

What people fail to realize is the following season in 1973 they were even better even as they lost two games. That was the year they won Super Bowl VIII. Our takeaway from this group is there is no substitution for preparation, but they also despised losing. Some people are motivated by the carrot but others by the stick. Most of us are motivated by a combination of both. The moral to the story is if you are not getting the results you want consider you either must improve your methodology (good players) and stepping up your preparation.