Nine of the 11 S&P sectors finished higher for the week ending 06/04/21, states Bonnie Gortler of bonniegortler.com.

Yields remain in a trading range between 1.53 and 17.5 since March (orange rectangle) and trending down since May (Figure 1). Rates closing below 1.53% could help fuel growth stocks and likely slow the rise in the financial sector.

Weekly market breadth was solid for the third week in a row. Both the Nasdaq and New York Stock Index (NYSE) had more stocks up than down. The New York Stock Exchange Index had 2317 advances and 1171 declines. Nasdaq had 2741 advances and 1785 declines.  New lows on the NYSE again closed under 20, implying low risk and more gains ahead.

On 5/11, new lows on NYSE jumped to 95, their highest level since late March flashing a warning sign, but new lows immediately dropped.  On 5/28, they closed at 7 (green circle), showing healthy underlying internal strength.

If new lows begin to expand and have a succession of days over 95 (the 5/11 high) will imply more risk and a shift in trend. On the other hand, if they remain low, the odds favor the advance will continue. 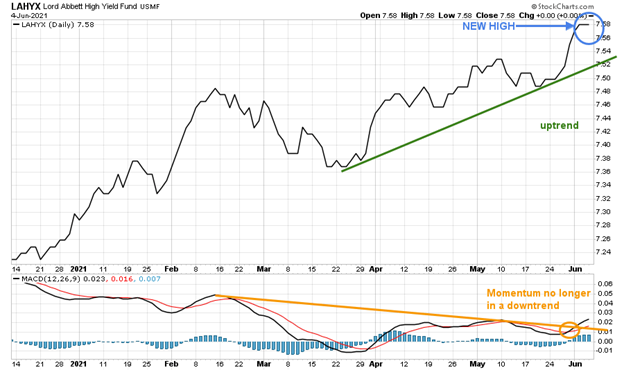 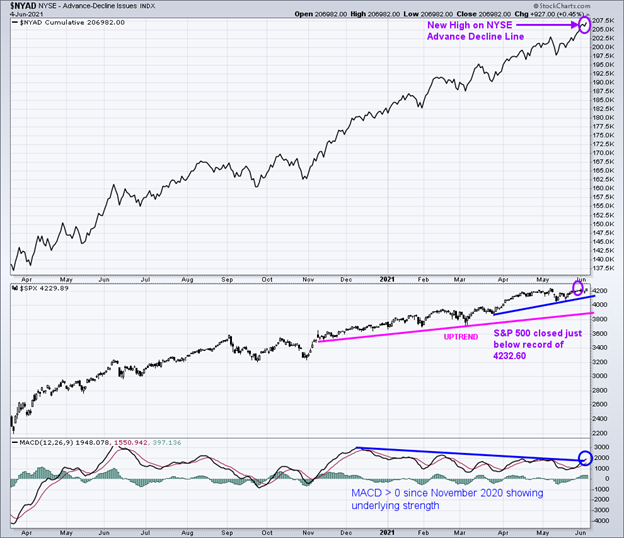 In the top portion of the chart (Figure: 6), The NYSE A/D line made a new high (purple arrow). Historically rarely does the market make a final peak when the cumulative advance-decline line makes a new high.

The advance/decline line (A/D) is one of my favorite technical indicators that measures market breadth. The A/D line shows how many stocks are participating in a stock market rally or decline. It represents a cumulative total of the number of stocks advancing versus the number of stocks declining. When the A/D Line rises, it means that more stocks are rising than declining (and vice versa).

The S&P 500 Index remains in an uptrend (blue line) from March (middle chart), closing at 4229.89, a few points from making a new record high (purple circle).

A close below the first support at 4100.00 would break the uptrend and warn of potential weakness. A close below 3723.34, the 3/4 low, would likely trip the sell stops and increase selling pressure beginning a more sustained decline.

MACD last week made a slight penetration of the downtrend since December 2020, a sign of strength and more gains to follow.

Volatility has quieted, as measured by The CBOE Volatility Index (VIX). After peaking on 5/13 at 28.93, VIX continues to decline, closing at 16.42. A close above 18.84 would imply an increase in day-to-day volatility. 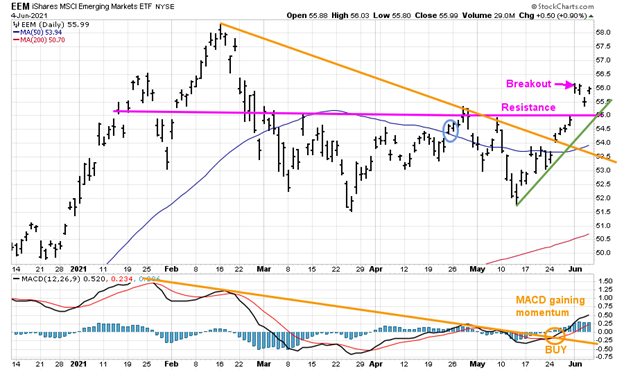 EEM has consolidated the past few months and has now broken through resistance, a breakout. 58.50 is the short-term upside objective. Support is at 55.00.

In the lower chart, MACD is gaining momentum and at its highest level since last February, a positive sign for the near term.

Europe (IEV) continues to gain relative strength compared to the S&P 500. The IEV/SPY ratio is at its highest point this year.

Watch for strength in Europe if it will break the one-year weekly downtrend. If the downtrend is broken, Europe will likely outperform the US in the coming weeks to months. 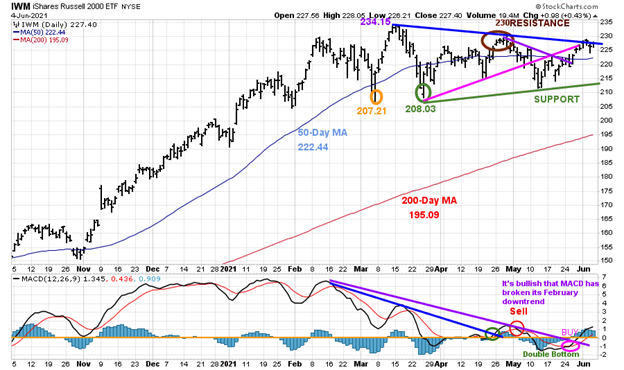 IWM is more attractive now, after breaking its short-term downtrend from April (purple line) and closing over the first resistance of 225.00, back to its uptrend line (pink). IWM closed above its rising 50-day moving average, positive signs that IWM will work its way higher.

Last week not much change in IWM, up +0.43%. IWM closed under resistance at 230.00 and in the area of the March downtrend (blue line). A close above 230.00 would be bullish and imply a test of the old highs and give new upside projections.

On the other hand, If IWM turns down if IWM closes below 222.00, it would not bode well for the broad market.

The bottom half of the chart is MACD (12, 26, 9), a measure of momentum.  After MACD broke the short-term downtrend from February (blue line), there was no thrust to the upside, and MACD gave a sell signal, turning down from above 0.

A different message now. MACD is on a buy. MACD is rising after a double bottom formation and above its downtrend (purple line). I expect IWM to get through resistance at 230.00 and take out the old highs beginning another leg higher in the near term.

A close below the March low at 207.21 would negate my bullish outlook and imply a more serious decline. 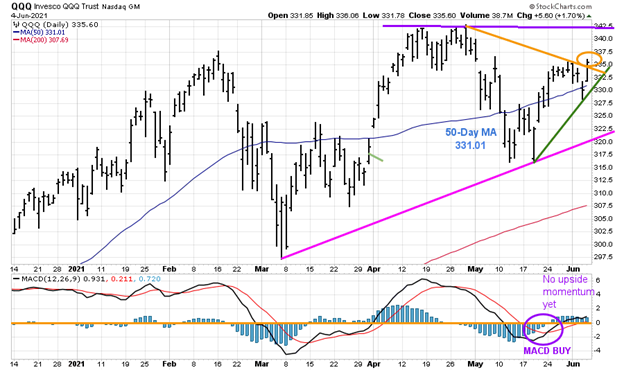 The bottom chart is MACD (12, 26, 9), a measure of momentum. MACD turned up from an oversold condition, below 0, and is now on a buy. No upside momentum yet but could change quickly if QQQ rises. 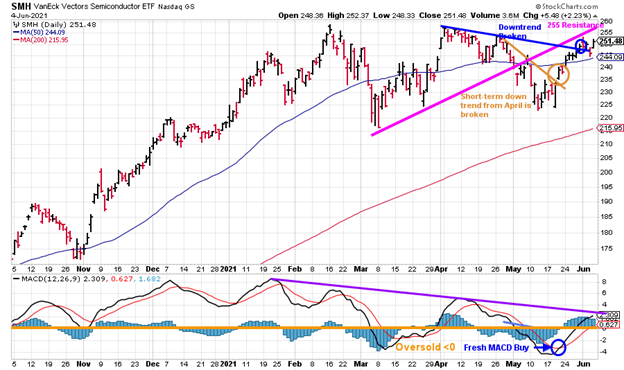 Semiconductors remain strong in recent weeks. Similar to QQQ, SMH broke its April downtrend (blue line), shifting the trend to up. SMH closed on Friday at 251.48 above its first resistance is at 250.00.

The lower chart is MACD, a measure of momentum. MACD remains on a buy and is gaining momentum. SMH remains stronger than QQQ in terms of relative strength. Watch for MACD to break the downtrend from January (purple line) to confirm continued strength in SMH, which would bode well for the broad market.

A close below 240.00 would be a warning sign the present rally will come to an end. 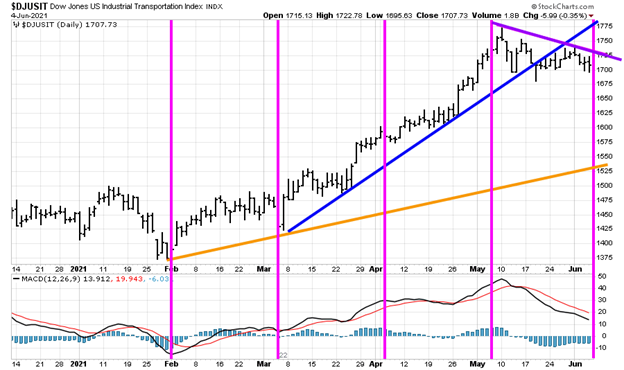 Watch the Dow Jones US Industrial Transportation Average $DJUSIT. After trending down since early May, a cycle bottom is possible, bullish in the near term.

The major averages all closed near their all-time highs.  International markets are outperforming the S&P 500, gaining strength. Emerging markets (EEM) has a short-term upside objective to 58.50.  The Nasdaq closed the week with its best gain in two weeks. Momentum patterns and market breadth are favorable. The NYSE Advance-Decline Line made a new high while the Nasdaq Ad-Line has broken its downtrends from February and April. The tape remains positive. I am looking for another leg up. The key closing numbers to watch for potentially a significant decline to begin are below 207.21 for IWM and below 317.50 for QQQ.