Last week’s breadth sell signal, see below, was fairly convincing and should be taken seriously, says Joe Duarte of In the Money Options.

But given the way the algos work, (stealth, cunning, sleight of hand, and misdirection) it’s worth considering that the selloff is yet another head fake.

And here is why. When the Fed announced that its Jackson Hole, Wyoming summit is going virtual due to Covid concerns, it threw an interesting wrench into things. Indeed, only one thing is clear: if the Fed is fearful enough of Covid to make its annual junket a virtual event, then how could they possibly justify starting a tapering process when the act of tapering could tank the MELA (Market, Economy, Life Decisions, Algos) system?

Consider that prior to the Fed’s announcement, the bearish case for stocks was developing as the central bank’s most recent FOMC meeting minutes indicated that the committee was eager to begin the QE tapering process. Immediately the market sold off.  But, now it’s hard to know what’s next given the fact that the Fed is so freaked out about Covid that it cancelled its annual camping trip to Wyoming.

Meanwhile, the news ignited an algo-fueled options expiration exaggerated short-covering rally on Friday, which theoretically could mean that yet another “buy the dip” opportunity has arrived, or not.

Risk Management is Everything

Investors are in a tough spot.

If one goes to 100% cash, or sells the market short, the risks of missing a major upside move, should the Fed not make any changes, could be a portfolio crippler.  On the other hand, if the Fed does pull the trigger on the QE taper and the market tanks, the odds of significant losses are high.  The market hinted that it is not pleased if QE ends on 8/18/21 after the release of the Fed’s minutes (see above for details).

As a result, at times like these, the real issue for investors of all time frames is how to manage risk—prepare for any contingency such as:

Let’s take the bad news first. If the Fed does signal an end to QE, the markets will likely tank.  On the other hand, if the Fed signals that there is no change in course likely for some time due to the emerging issues in the world (Covid, geopolitics, etc.) and the likelihood of economic softening, it’s no guarantee that the market would rally, but it could.

So, keep these guidelines in mind:

Kroger: Why Unsexy Is Way Cool in This Market as Buffett’s Midas Touch Reappears

I recently recommended purchasing shares of grocery giant Kroger (KR), based purely on technical factors, and the stock has taken off. To be honest, I’ve never been a big fan of grocery store stocks given their propensity to miss earnings expectations often due to razor-thin margins.  But, it’s hard to argue with a stout price chart, especially in a market where finding potential winners has become difficult of late. 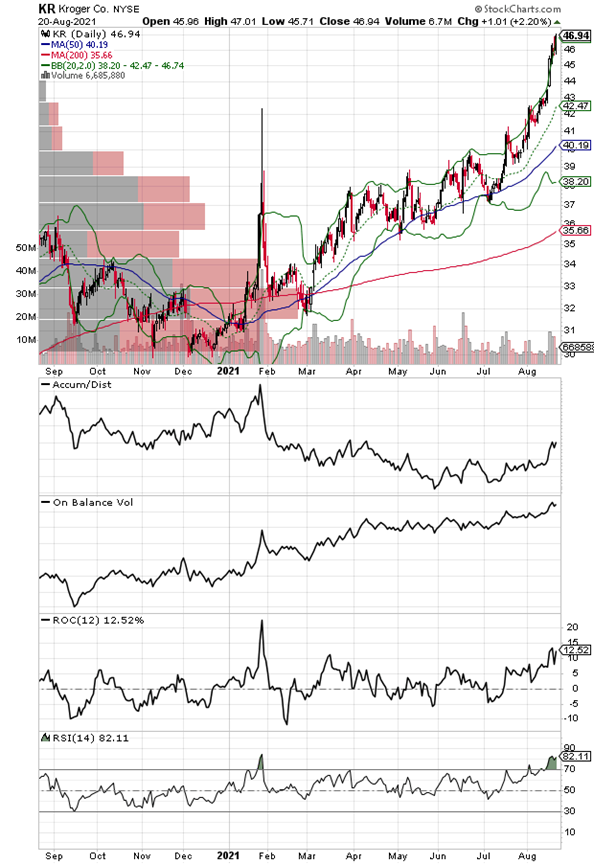 But here is the truth. The stock has been on a tear, which could last a while longer. And it’s most likely due, not so much to the fundamentals of the company, but to the fact that Warren Buffet is or has been buying shares. Sure Buffett’s, Buffett. But Kroger is still Kroger, a grocery store. Yet, this is where we are in this market as algos and Redditt mobs juice shares on a regular basis based on who knows what?

Still, the stock is moving nicely, and price is the ultimate truth. So, after a bit of digging, here is what may have impressed Warren, and why it’s an interesting story, which emerges beyond the algos and the Reddit mob.

The company seems to have a fairly loyal customer following and is able to keep or increase its margins as its customers seem to tolerate higher prices more often than perhaps those of its competition. But there is more:

So, we have a grocery store chain with a strong market presence and management that seems to have its act together and a host of other positives. That’s cool for sure.

But for me the best thing is that Wall Street has missed the boat. They’re looking at Kroger through the lenses of the past, which show them that it’s a grocery store chain with low margins and difficulties in managing costs like the rest of them.

And they may be right. But the fact is that if the economy does slow significantly, Kroger and grocery store chains with good management are likely to deliver pleasant surprises as consumers change their shopping habits and shift to spending their hard-earned money on necessary items such as food, instead of sports cars and Teslas.

The stock is well overbought and is likely to consolidate at some point. It could even crash as the Reddit mobs recede. But there is something positive going on technically.  While On-Balance Volume (OBV) is decidedly higher, Accumulation Distribution (ADI) is barely turning around, a sign that the recent advance is at least partially due to short-covering with the other part due to smart money like Buffet moving in.

And here is where it gets very interesting. After a consolidation, I would expect the Wall Street analyst lemming horde to upgrade the stock, as they parrot all the factors that are in this article and others around the net.

And that hype is what should fuel the next up leg.

I own shares in KR as of this writing.

Options players continue to tightly hedge against a stock market crash.  Simply put, if SPY is trading at 440, then put buyers are lining up at 439. If the market goes to 439, then the put buyers line up at 438 and so on. This is in contrast to when the market is in a bullish trend where option traders tend to give SPY more room to maneuver.  In other words, the closer the put buyers are to the current trading price, the higher the odds of rising volatility as put buying by traders causes dealers to sell puts and then hedge their bets by selling stocks.

In essence this becomes a market in which every down tick brings on more bets that the market will fall and sets up a downward bias to the trend.

So that means that if the market turns aggressively lower, the selling will accelerate as the put buying increases. And because the bets are so tightly geared to the next low price in the option chain you can see that ta downward spiral can rapidly accelerate.

The New York Stock Exchange Advance Decline line (NYAD), the most accurate indicator of the stock market’s trend since 2016, took a beating last week reversing a long-term uptrend and turning into what for now is a short-term down trend. That said, this could be yet another rapid short-term correction, which will be used by algos to buy the dip.

Still, unless things reverse fairly soon, (NYAD) has given a sell signal as it has fallen below its 50-day moving average and below the 50 area on its RSI simultaneously. That is a Duarte 50-50 sell signal. 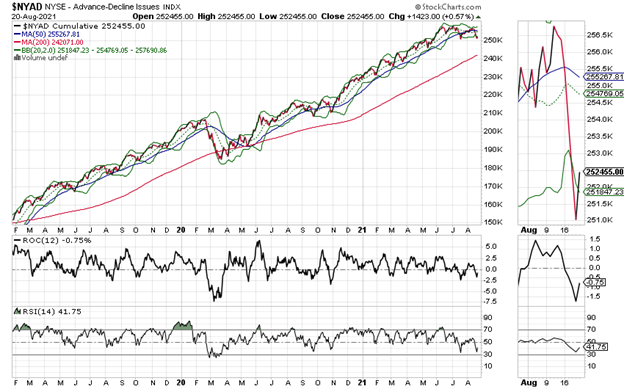 As a result, as noted above, until this technical development is remedied, the odds of a lasting rally in stocks will be limited and caution is warranted. 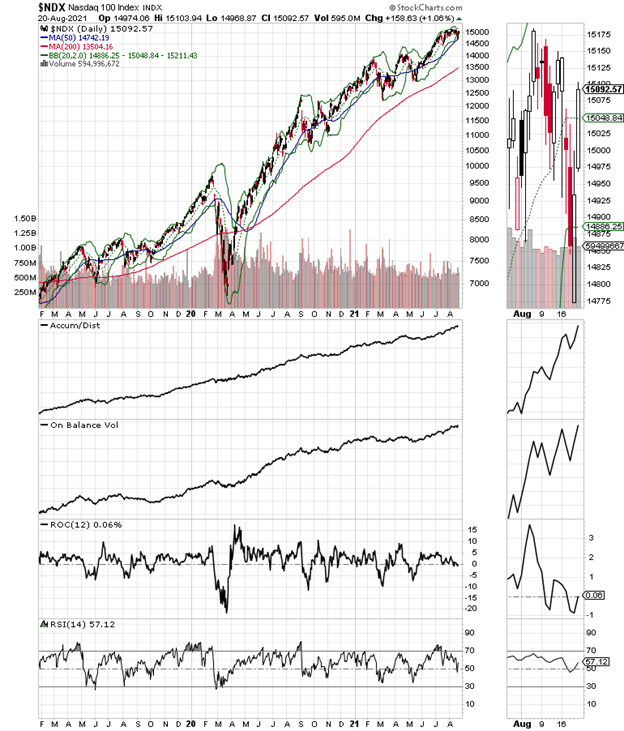 Nevertheless, the Nasdaq 100 index (NDX) bounced back fairly stoutly on 8/20/21, which means that it is possible that the correction has already run its course, barring a nasty surprise. 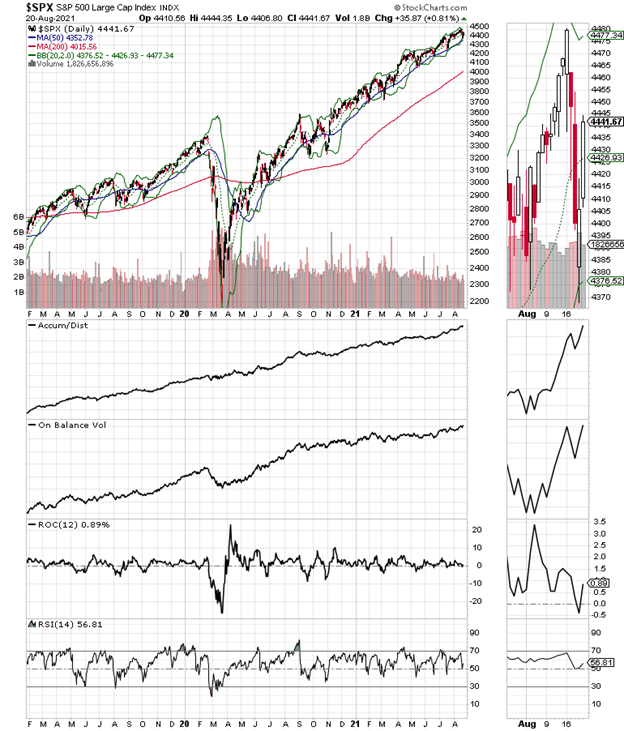 The S&P 500 (SPX) also bounced back fairly well.  Interestingly the Accumulation Distribution (ADI) for both NDX and SPX is suggesting that money is moving into the indexes.