There isn’t much to be excited about in the world these days, but for at least for now the case for stocks remains more bullish than bearish, says Joe Duarte of In the Money Options.

Fears of the Covid-19 delta variant seem to have negatively affected the August payroll numbers and put the Fed’s taper hopes on hold as the US economy is showing signs of slowing. In addition, the market’s breadth has improved suggesting that a new up leg in stocks may be approaching, although the neutral at best market breadth suggests that selectivity will be the key to success.

Indeed, the headline payroll number was well below expectations, but the miss was mostly due to a lack of jobs in the travel and hospitality industry. Other areas of the economy showed growth in hiring although at a slowing pace. Here is an interesting bullet list courtesy of Zero Hedge.

All of which suggests that there are still areas of the economy which are growing, albeit at a slower pace than a few months ago, even as others are struggling. One of them is information technology (IT) where the move toward cloud computing, as I describe below, is increasing as companies look for efficiencies.

So, the bottom line is that concentrating on areas of the market focusing on what’s growing in the economy is likely to pay off until the next algo-concocted bogeyman appears.

Expectations for Continued Fed Liquidity Improves Outlook for Some Stocks

It’s an all or nothing world in the stock market these days with prices being influenced mostly by whether the Federal Reserve will continue its QE-zero interest rate policy or not. Certainly, the outlook for stocks improved, when as I noted here last week, Fed Chair Powell announced that a bond purchase taper could start before the end of 2021 but that rising interest rates would not likely follow for some time.

That was then. Now with weak employment numbers, slumping factory orders, falling consumer confidence and mixed PMI reports the data suggests that the US economy is slowing, the taper talk, even as it continues is not being seen as a certainty by the algos. All of which suggests that if Mr. Powell indeed pulls the trigger on the QE tapering any time soon, the market might be caught off guard, and the MELA system—the combination of the Markets (M), the Economy (E), people’s life and financial decisions (L), and the algos (A) would likely enter a downward spiral.

In other words, in the simple all or nothing world of the algos, for now it all adds up to: the Fed isn’t going to taper anytime soon. And that means that regardless of valuations, earnings, or any other significant fundamentals, it’s once again time to buy stocks.

Of course, there is always a dark side, and the longer stocks levitate with little but the Fed to power the climb, the more painful will be the fall. But if you can’t make any money from collecting interest, there is little alternative for investing beyond stocks. All of which means that we are likely to see another extended rally in the market, perhaps until December.

Of course, we have to get past October, which is usually full of surprises. Meanwhile, common sense should prevail, which means that our recent guidelines remain intact:

One of my favorite things to do is to find companies that the market has forgotten about but whose fortunes are turning around. And in this case, software company and increasingly aggressive cloud rider Splunk (SPLK) fits that bill.

Once a trendy (was it a unicorn?) company, the luster wore off of Splunk, and the shares fell as profits became elusive and management seemed to lose its way. Moreover, things got worse when Covid came along when the market voted with its feet and the stock lost half its value from August 2020 to June 2021. It all started after a huge runup in tech stocks, which ended badly during the late summer of 2020. But it didn’t stop there as the stock continued to drop aggressively as the company continued to miss earnings expectations and provide less than enthusiastic guidance.

It seems as if the negative aspects of the Covid pandemic on Splunk’s customer base caused a pullback in demand for the company’s products. And that led to a rethink of the company’s focus, from traditional software deployment to a cloud-based model with the ultimate goal being to be an 80-90% cloud company by 2022. 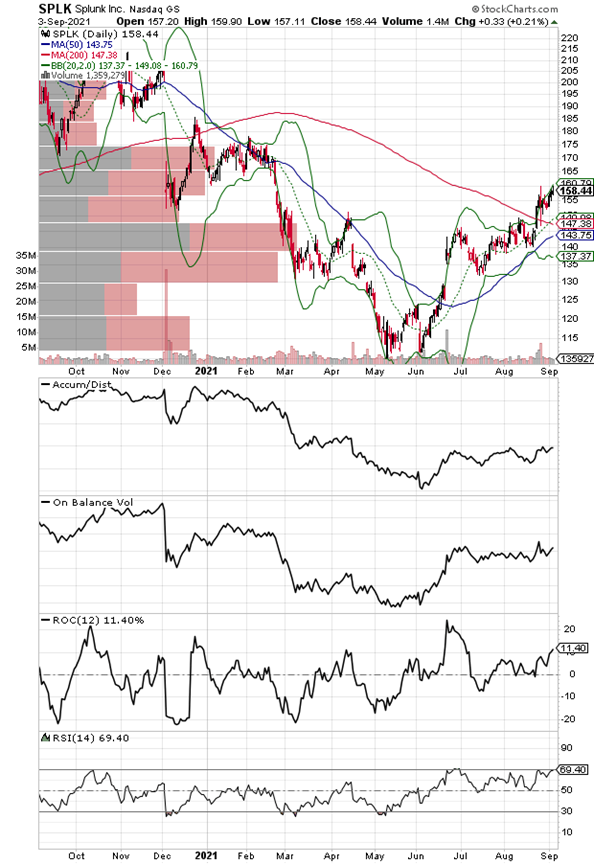 And the transition is happening nearly at the speed of light. Specifically, 50-60% of its offerings are now cloud-based. Moreover, according to the most recent earnings call, where SPLK beat expectations and offered very positive guidance, the company’s products are now driven by what the company calls “state of the art” machine learnings tools, which accelerate product deployment and modification in the cloud. As a result, SPLK is now forecasting growth in multiple sectors including online learning and telemedicine, as well as in traditional business lines.

The stock has bottomed and has just emerged from a nifty head-and-shoulders bottom while breaking decisively above its 200-day moving average. In addition, a move in the near term to the $170-$175 area looks doable in the short term, barring a negative turn to market conditions.

I own shares and options in SPLK as of this writing.

The Bulls are getting more bullish, but the bears don’t want to let go.

Although options players continue to tightly hedge against a stock market crash the volume in SPY call options is starting to rise suggesting that market makers and algos are being forced to buy stocks in order to hedge against losses. This is a net positive for now and is likely the reason that the market has not fallen apart.

At the same time, however, the now-familiar pattern of more puts being bought just below the most current strike price remains in place, although that is starting to change as well.

What it means is that for now, the market’s bias is more up than down.

The New York Stock Exchange Advance Decline line (NYAD), the most accurate indicator of the stock market’s trend since 2016, made a barely there new high on 9/2/21, which quickly faded on 9/3, a fact that leaves the market’s breadth in limbo. So, the best we can say is that NYAD is neutral. 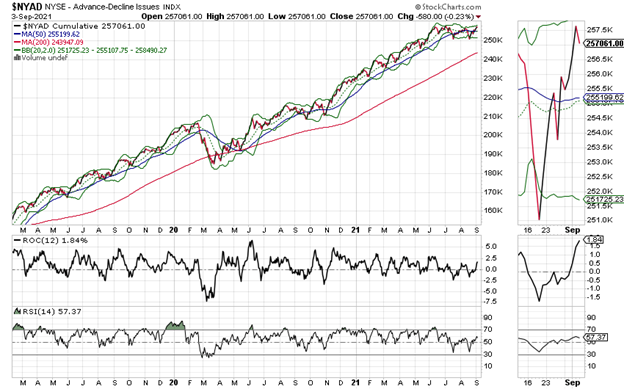 Unfortunately, neutral doesn’t quite cut it. So, unless NYAD makes that elusive new high soon the market is likely to be choppy at best. 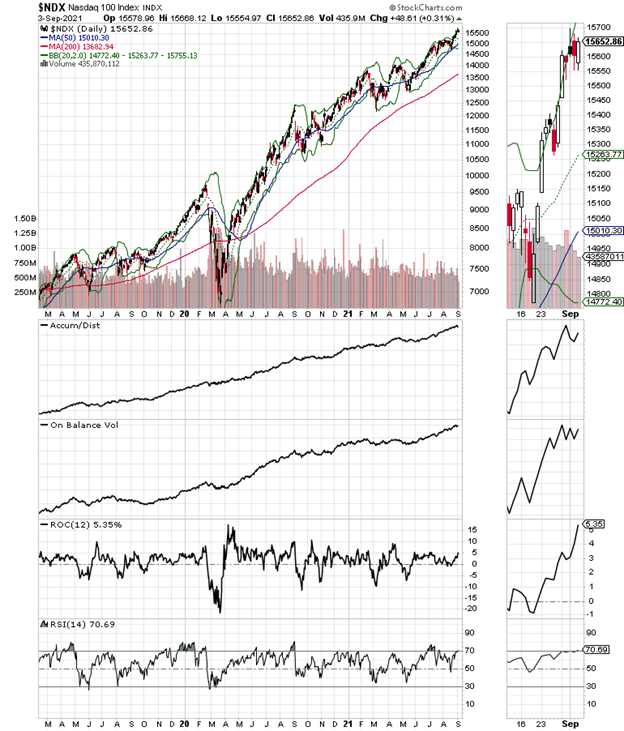 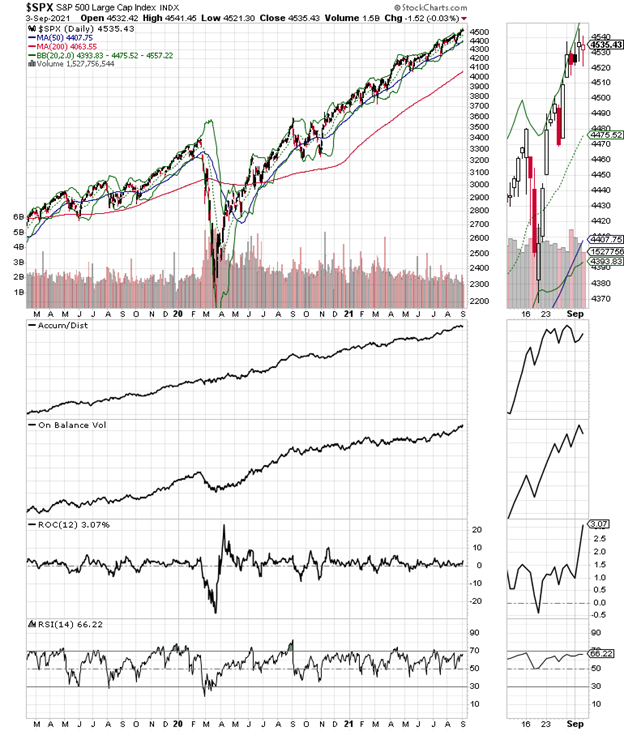