Financials Have Been Leaders of the Advance, but the Risk of a Leadership Change Is Forthcoming

In quiet trading before the Labor Day holiday, defensive sectors led the way. Seven of the 11 S&P sectors finished higher for the week ending 09/3/21, states Bonnie Gortler of bonniegortler.com. 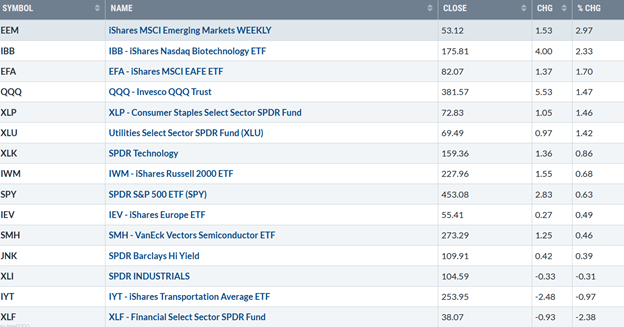 Hi-Yield (JNK) and open-end high yield corporate bond funds rose to new highs week (Figure 4). The Russell 2000 (IWM) consolidated after rising over 5% the previous week, closing above previous resistance of 225.00, now support.  MACD is on a buy (Figure 9). The Nasdaq Daily AD Line broke the July downtrend (Figure 6). The weekly relative strength ratio to the S&P 500 (IWM/SPY) rises after a succession of lower lows with a flattening MACD (Figure 7). Nasdaq had 248 new highs, the highest reading since late June. (Figure 5). Emerging Markets (EEM) was strong for the second week in a row, gaining 2.97% after up over 4% the previous week, closing above its 50-Week MA.

Transports (IYT) continue to underperform, lag the major averages, and remain in a downtrend since May (Figure 8). The Nasdaq-line AD-Line remains below where it broke down in July (Figure 7). September and October are volatile months, and historically when some of the worst bear markets have occurred. Market technicals of the Financial sector are giving warning signals of a pending decline (Figure 13).

Lord Abbett High Yield, an open-end high yield corporate bond fund, broke its uptrend in July but turned out to be a false breakdown and has recovered to make a new high.

High-yield mutual funds and high-yield ETFs such as HYG and JNK recovered their July losses and now are at or near their all-time highs. Continued strength in high-yields is positive for the broad market. However, if they take out the July low, it will signify that trouble lies ahead.

It's positive more Nasdaq stocks made new highs last week, the highest since late June (light blue circle).  Although the Nasdaq is at an all-time high, new highs remain well below the peak reading of 708 set on 2/8. Watch if new highs expand to over 332, which would be positive for the short term, or if they begin to contract, then the rally is likely to fizzle.

The Daily Nasdaq-line AD-Line broke down in July but has strengthened the past two weeks breaking the July downtrend. Continued positive breadth through the July highs would be favorable.

On the other hand, negative breadth would signify the Nasdaq rally could stall. If there is a pullback in Nasdaq, watch the AD-Line if it holds above the August low or violated, then expect weakness in Nasdaq to follow.

The Nasdaq-line AD-Line had closed at its lowest low since October 2020. The improvement in the AD Line stopped at resistance. Consider the rally in Nasdaq suspect until it closes above where it broke down in July (green circle).

Transports (IYT) continue to lag and remain in a downtrend since May. 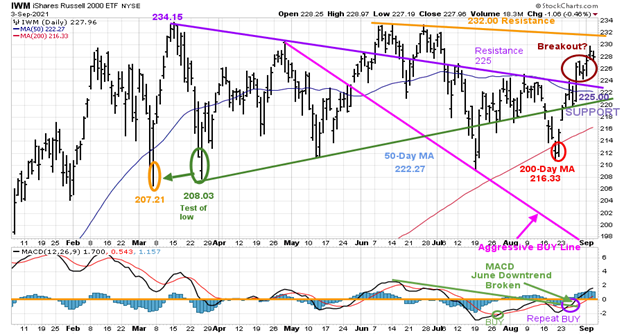 Early August, IWM had lagged the major averages. However, IWM came to life at the end of the month, clearing resistance at 225.00 and closing above its 50-day MA.  A close above 232.00 previous resistance would confirm the breakout.

A retracement between 222 and 225.00 remains possible and is still considered positive. However, a close below 216.33, the 200-day moving average, would imply the breakout was unsustainable and a decline to 197.50

The bottom half of the chart is MACD (12, 26, 9), a measure of momentum. MACD is on a buy and recently broke the June downtrend, a positive sign a test of the old high is likely. On the other hand, a turn down below 0 would be negative. 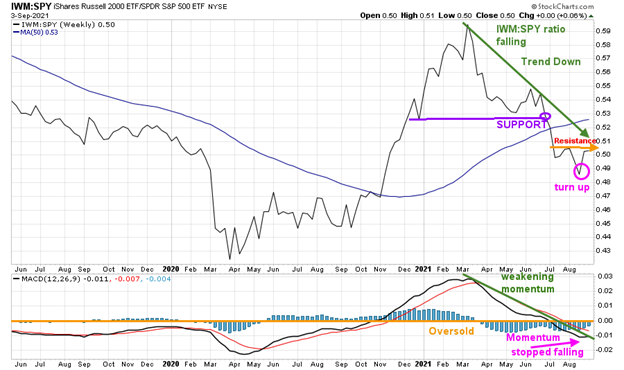 The weekly IWM /SPY ratio fell below support in June (purple line). With the last two weeks of gains in IWM, the IWM /SPY ratio turned up. However, it closed at July resistance, not yet breaking the July downtrend, and remains below the 50-week moving average (MA). MACD (in the lower chart) stopped falling to new lows, flattening, a positive sign. A turn-up and trendline break would imply further strength. 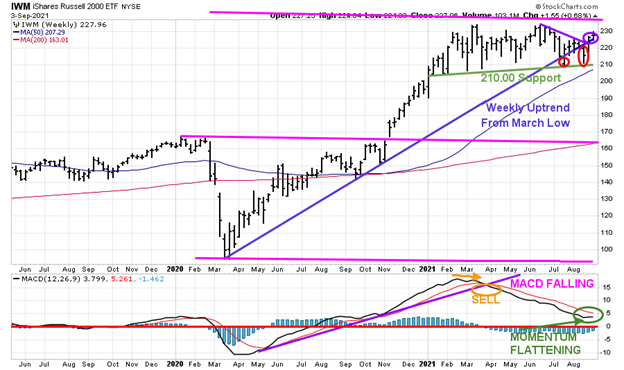 The Russell 2000 (IWM) (top chart) weekly support remains at 210.00. Resistance is at 232.00. MACD (lower chart) remains on a sell, not yet oversold, below 0, (red horizontal line) in a favorable buy position, showing that downside momentum has subsided. 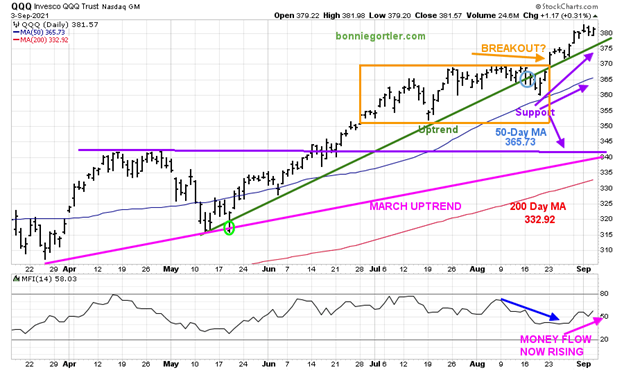 The chart shows the daily Invesco QQQ (QQQ) , an exchange-traded fund based on the Nasdaq 100 Index with its 50-day moving average and 200-day moving average. The March Uptrend remains intact (pink line). Since June, QQQ was in a trading range (orange rectangle) and then broke out to the upside. The upside objective is 390.00.

Any close below the March uptrend would likely hit sell stops to test the 200-day MA, which stands at 332.92 at this writing. As long as QQQ closes above 370.00, the bulls are in control.

Signs of potential trouble in the financial sector in the intermediate term? 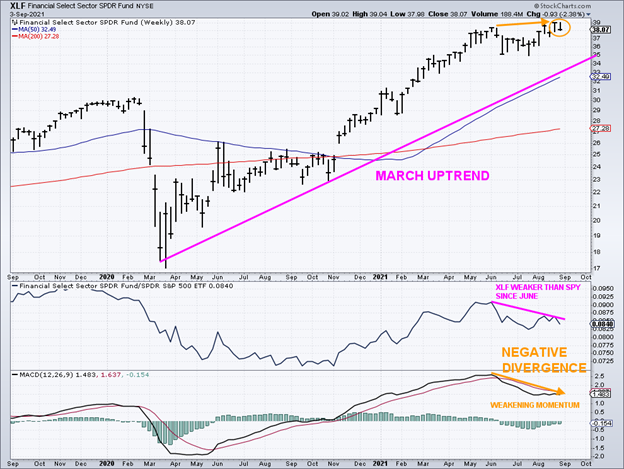 Financials have gained 30.23% in 2021. However, leadership may be coming to an end, and further gains are in question. The latest technical action is worrisome and bears watching.

On 9/3, XLF (top chart) closed at its low after closing the previous week at its high (orange circle). In the middle chart, the Financial Sector (XLF) is weaker than the S&P 500.

Notice how MACD momentum is weakening in the lower chart, forming a negative divergence, a potential shift in trend. A negative or bearish divergence forms when the price makes higher highs, and MACD makes a lower high.

Financials have been leaders of the advance, but the risk of a leadership change is forthcoming.

Nasdaq led the market higher while the Russell 2000 consolidated after coming to life the previous week. Defensive sectors are gaining the interest of investors. Financials are losing momentum, implying their leadership may be coming to an end sooner rather than later. Risk management remains important despite no significant pullback in the S&P 500 this year. The bulls remain in control for now. However, September and October tend to be volatile months and could bring the bears out of hibernation at any time

Remember to manage your risk, and your wealth will grow

Disclaimer: Although the information is made with a sincere effort for accuracy, it is not guaranteed that the information provided is a statement of fact. Nor can we guarantee the results of following any of the recommendations made herein. Readers are encouraged to meet with their own advisors to consider the suitability of investments for their own particular situations and for determination of their own risk levels. Past performance does not guarantee any future results
Learn more about Bonnie Gortler at BonnieGortler.com.