The dust will eventually clear but the 200-day moving average for the New York Stock Exchange Advance-Decline line (NYAD) turned into a brick wall last week and the CBOE Volatility Index (VIX) says there is more trouble ahead for stocks, states Joe Duarte, editor of In the Money Options.

Powell Does the Job

Stocks bounced back from their options expiration-induced swoon midweek, but turned lower once again on 8/26/22 when Fed Chair Jay Powell at the Fed’s Jackson Hole, Wyoming annual confab noted the central bank would likely keep interest rates high for “some time,” while suggesting that the central bank’s next moves would likely cause “pain.”

Moreover, the latest inflation data suggests that although the rate of rising has slowed, inflation is not going away just yet as the post-pandemic and war in Ukraine era evolves. That’s because the structural nature of the underlying problem, too much demand and not enough supply, isn’t going away anytime soon no matter how much the Fed raises rates.

Therefore, even though there are still reasons to own certain stocks in this market, the pickings may be slim as the current structural problems in the global economy require solutions that could take years to sort out.

On the positive side, some companies that can address these problems will flourish while others may not do well.  For the foreseeable future, I’ll be focusing on those whose industrial niches are most likely to pay off.

How Did We Get Here?

Beginning in the early 2000s money began flowing out of the US and Europe into China as companies looked to increase profits by reducing their exposure to rising labor costs and taxes. This turned China into the world’s manufacturing hub and created a world where inflation was controlled.

The defining phrase of the era was “just in time” supply chain management, where production and consumption marched hand in hand and efficiency was rewarded with rising profits.  The advent of software and artificial intelligence to automate great swaths of the process added to the system’s ability to maintain lower costs and rising profits. A bonus effect was the efficient coordination and management of the supply chain.

Unfortunately, the Covid pandemic put an end to the “just in time” dynamic by exposing its gross faults. First, “just in time” manufacturing and supply chain management had no redundancy. That meant that when one link in the chain misfired, the chain ground to a halt.

Moreover, by transferring its manufacturing capacity to China, Europe, and the US became vulnerable to China’s self-interests. This worsened when China pursued its “zero Covid” policies which featured rolling shutdowns and were pushed totally over the edge when Russia invaded Ukraine.

All of which led to supply chain disruptions and the realization that there was a need to repatriate manufacturing capacity to the US and Europe. Unfortunately, policymakers and CEOs seem to have figured this out a bit late in the game, which means that it’s going to take a while to reverse the dynamic if it’s reversible at all.

And here is one final thought. Only some of the manufacturing capacity has begun to be transferred to the US and Europe. A large portion is moving from China to Vietnam, India, and the Balkans.

What could possibly go wrong?

Where Do We Go Next?

The data suggests that a difficult few years may lie ahead as there aren’t enough factories or production facilities that are available to produce goods. There aren’t enough workers to do the work. Natural cycles will make progress slower than hoped for.

The Central Theme Is Energy

If there is an element that binds everything in the global economy it’s reliable energy. And with the difficulties faced by carbon sources due to policy changes and the general state of the energy sector and related industries due to their responses to policy decisions and their search for profits, the solution for the intermediate future may be nuclear energy.

Of course, past disasters such as Fukushima, Three Mile Island, and Chernobyl are proof that nuclear energy is high risk.  Nevertheless, given the difficulties with the current alternatives, from an investment standpoint, the sector is worth considering.

I’ve been bullish on oil and natural gas stocks for some time now. But I recently recommended purchasing shares in the Global X Uranium ETF (URA) as I expect that will be the next sector that flourish. 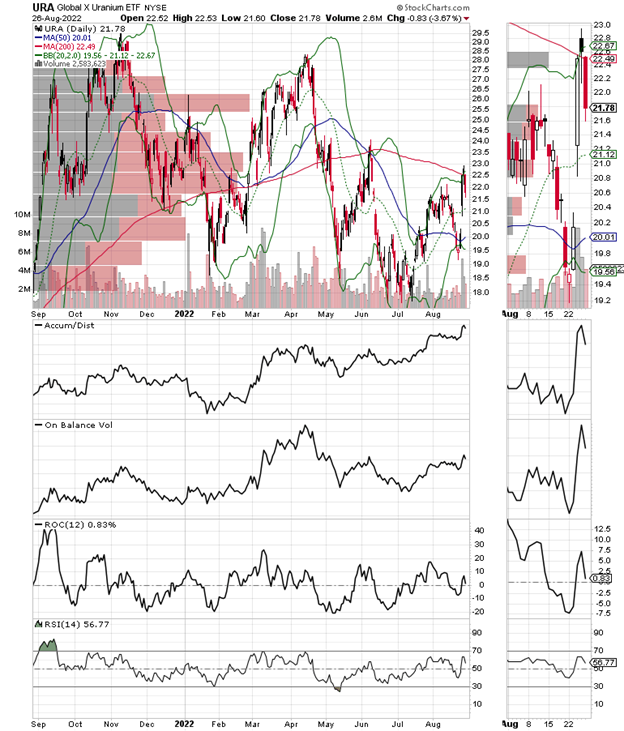 Japan is considering the reversal of its nuclear plant shutdowns, and I expect that after what could be a disastrous winter for Europe, other countries will soften their positions against this controversial power source.

Thus, for investors who can be patient, this ETF provides a one-stop shop for owning the sector as it includes companies that mine, and process uranium, as well as nuclear fuel and waste transportation and processing companies. Moreover, the diversification will help to offset the potential for individual company potholes such as earnings misses.

The ETF has been under aggressive accumulation lately as Accumulation Distribution (ADI) and On Balance Volume (OBV) illustrate. In addition, it is now testing the key resistance area of its 200-day moving average.

Owning this ETF will require some patience as there are still lots of roadblocks regarding nuclear energy. But if you’ve got the time, the odds of an excellent payoff are on your side.

The bond market seems a bit undecided about what’s next for inflation, which means that perhaps they are starting to believe that Powell means business. Moreover, the bond market seems to be waiting for the signal that recessionary forces are gaining strength.

The US Ten-Year Note Yield (TNX) remained above its 50-day moving average and the important 3% yield, but it did not tick decidedly higher after Powell’s speech. Meanwhile, the Eurodollar Index remained stable. 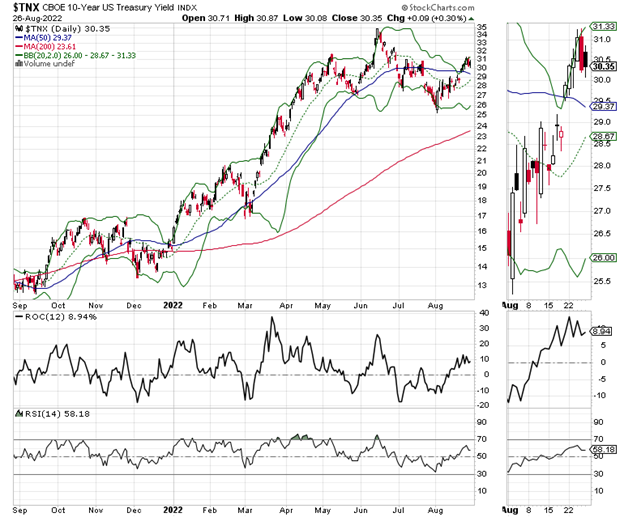 This suggests that the bond market may now be considering that Powell may have fewer interest rate hikes in the works as the economy is about to turn lower, or that perhaps the slower rate of growth in inflation will continue.

Interestingly, the Eurodollar market remained relatively stable despite Powell’s hawkish speech.  In this case, the best you can say is that it could have been worse as XED slid early in the week but didn’t crash during Powell’s speech.  That’s a small positive as a stable Eurodollar market bodes well for system liquidity.

You can get a working overview of how this works in my latest Your Daily Five video here.

Welcome to the Edge of Chaos

The CBOE Volatility Index (VIX) moved further above 25, a fairly aggressive move higher which suggests the downside for stocks still has some more legs. This is the result of put option buyers adding to their positions from options expiration and market makers hedging selling via selling stocks, ETFs, and stock index futures.

The S&P 500 (SPX) remained above 4000 and its 50-day moving average, the next big test of support. SPX failed miserably in its attempt to climb above the 200-day moving average. Accumulation Distribution (ADI) has topped out meaning that short sellers are back. On Balance Volume (OBV) is not showing any positive signs at the moment. 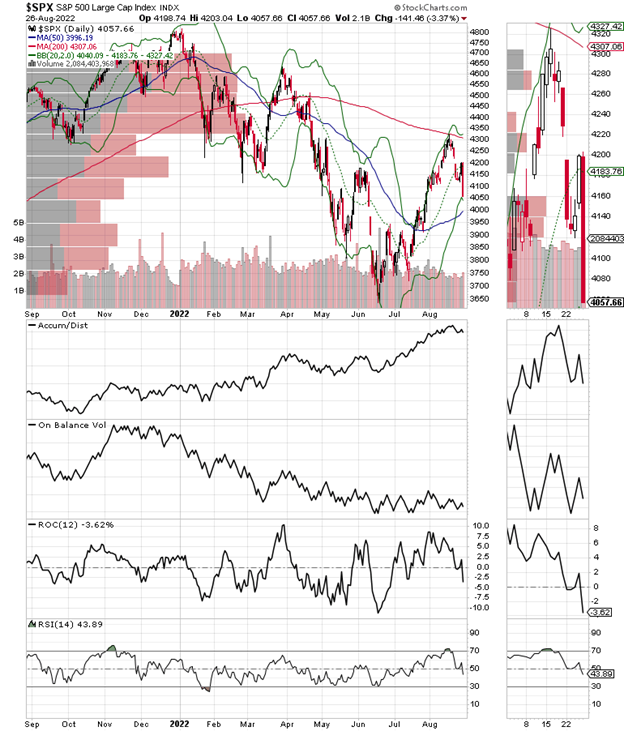 The Nasdaq 100 Index (NDX) crashed below 13,000 and its 20-day moving average. Accumulation Distribution (ADI) is heading down as short sellers are coming back and On Balance Volume (OBV) turned lower which means sellers are bailing out. 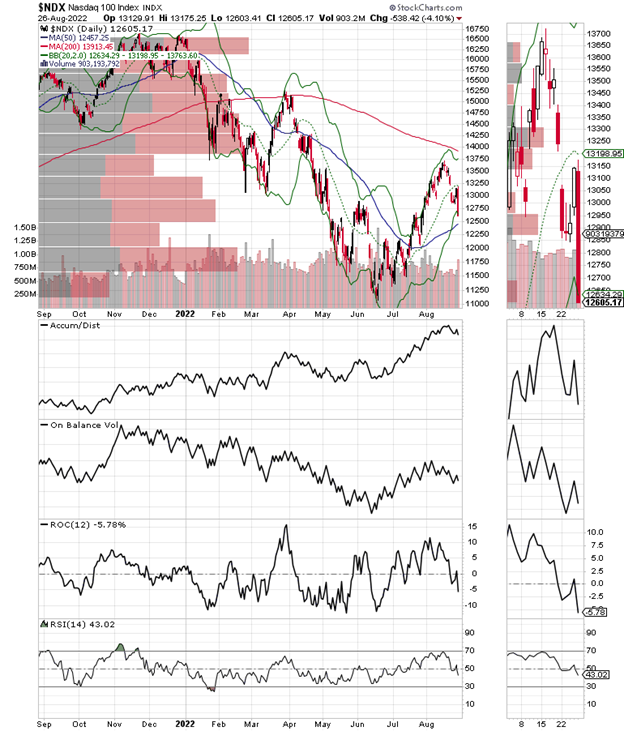