Jerome Powell said he expects inflation to rise this summer. And even though he also said he’ll keep (short-term) interest rates near zero, even if inflation pressures increase, the markets were quick to react, explains Mary Anne and Pamela Aden, editors of The Aden Forecast.

The general fear was that interest rates could rise sooner than expected and this pushed long-term rates up further, along with the U.S. dollar. Stocks and metals prices declined.

For now interest rates are still calling the shots. The 10 year yield bounced up to another one year high today, jumping above 1.50% The chart below shows that the yield has now reached an extreme high level and the upside is limited for the long yields.

You can see the leading indicator is at an extreme high while the 10 year yield has reached our first target area. The 1.50% level was the historically super low level. While, interestingly, it’s now the first mark for a rebound rise from the low interest rate world we live in today.

In other words, the 10 year yield is now poised for a breather decline to possibly its 65 week MA at 1%, and we’re likely to see weakness and consolidation for a few months. This means the bond market is poised to rise in a rebound from the washout decline. 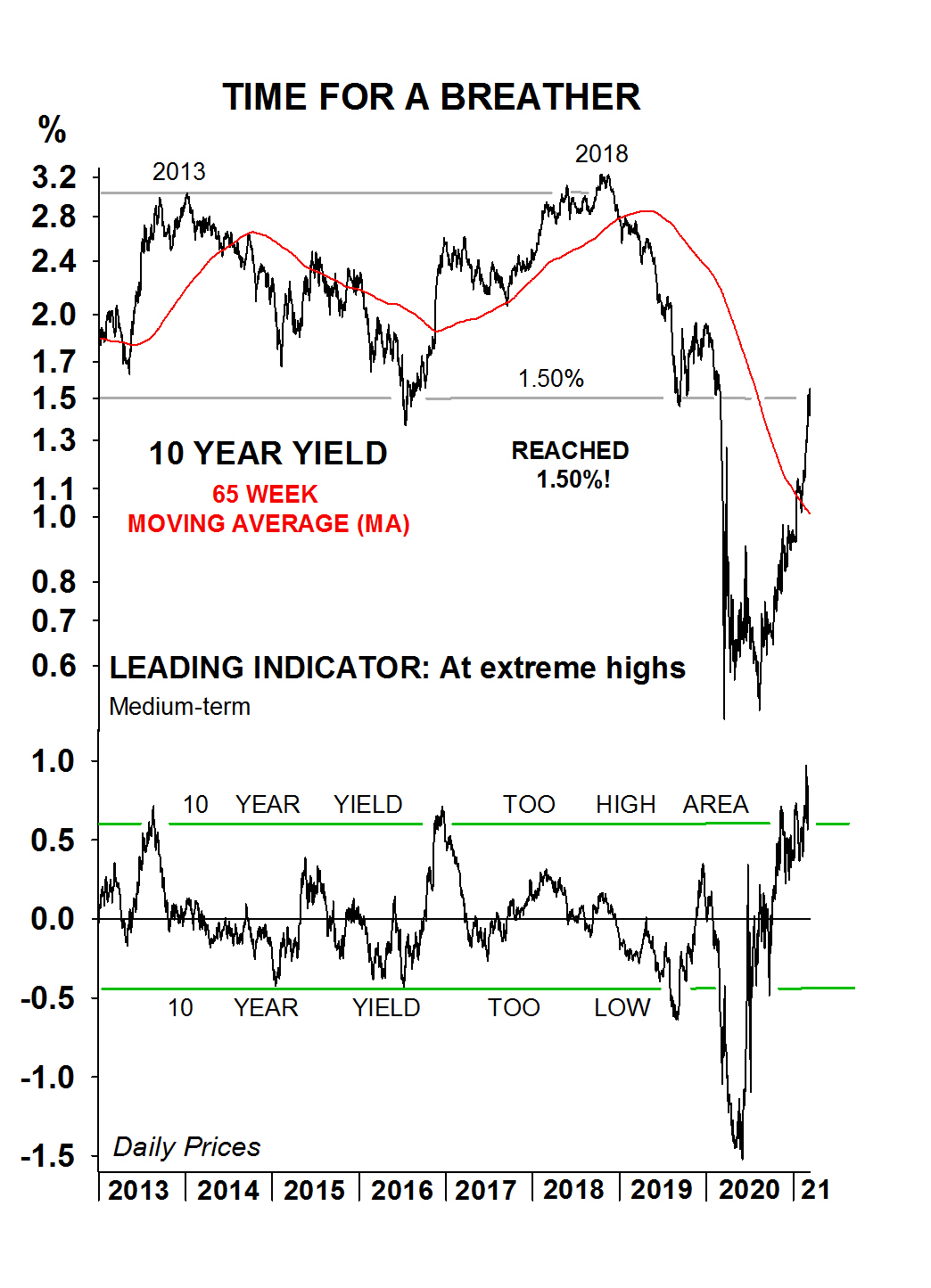 This also means we may be nearing the lows in gold. The gold price broke down today, falling below $1700 in a deeper D decline on the interest rate news and a stronger dollar.

Gold’s now down 18% in a 7 month D decline correction. This matches up to several prior D declines, and as you can see on the chart, it’s now approaching its 23 month MA while its indicator is nearing a D low level.

Gold could still decline further but it’ll likely hold near the 23 month MA at $1665-1670. Silver has become vulnerable the longer it stays below $25.50, see chart. It’s unlikely to fall sharply. Platinum as well. 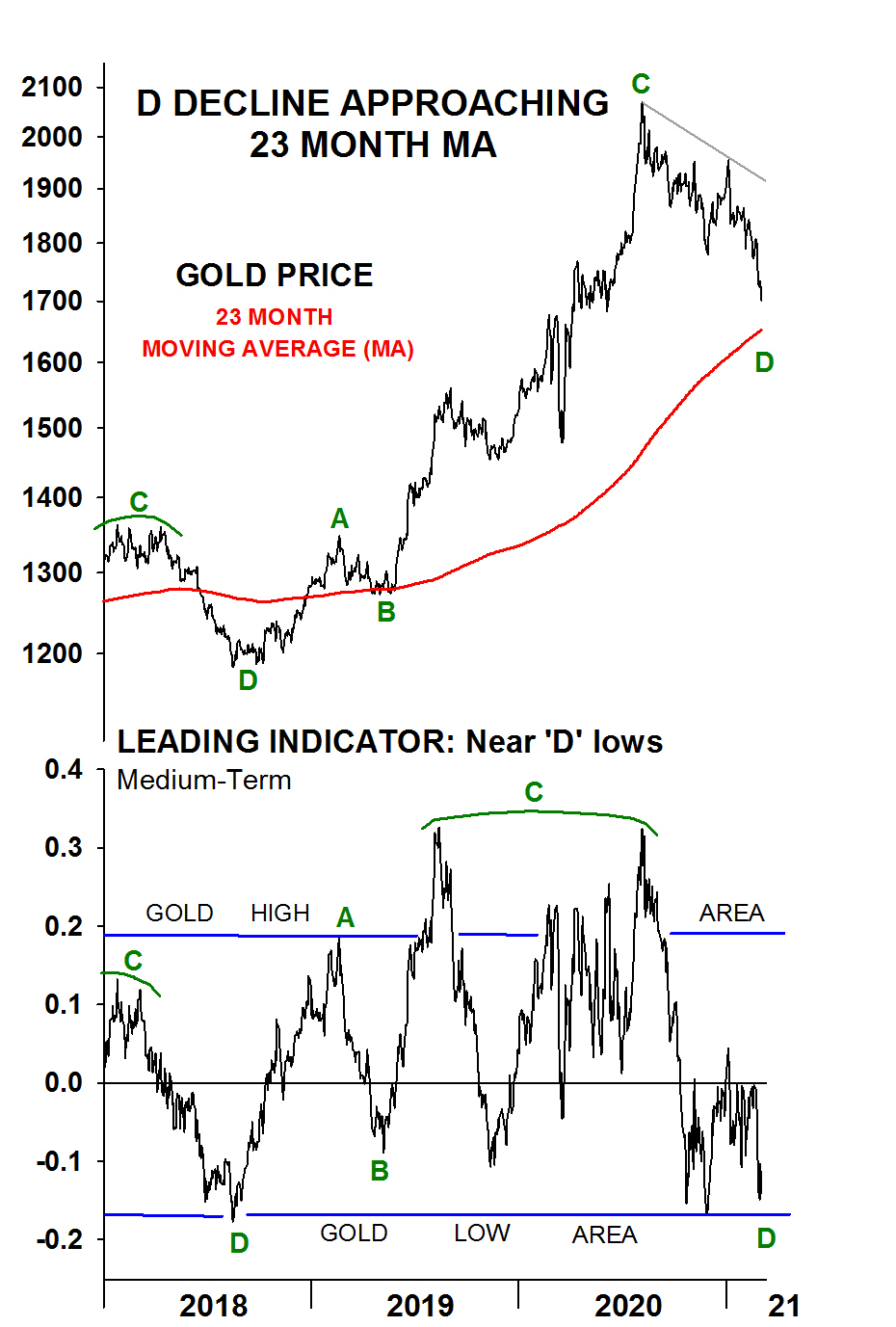 Copper is declining in a normal downward correction (see chart). It became clearly overbought after doubling since last March, and the resource sector is taking a breather.

Copper could decline to possibly $3.70 and it would still be very strong. Our positions are declining from their highs and a further correction now is normal. We recommend riding through weakness.

And if you don’t have all of your position set, buy during further weakness. Crude oil continues to jump to new highs and it’s almost at our $70 target. 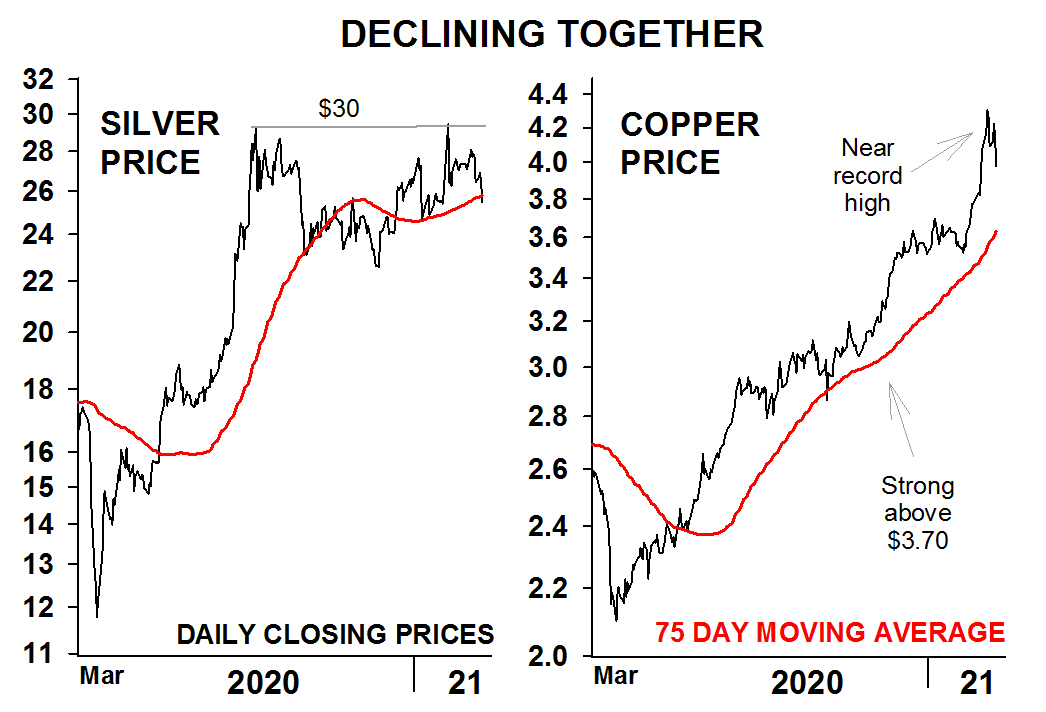 The U.S. dollar index rose to a three month high today. The dollar likes the possibility of higher interest rates, but this may not last too much longer.

Currently, the dollar index is firm above 91 but the bear market will remain in force by staying below 95. The major currencies are under some downward pressure, but they’re bullish and we advise holding our recommended currencies.

The stock market has been under downward pressure due to rising rates. But the stock market is still bullish and it’s poised to rise further (see chart). Note, the PTI remains strong and it’s telling us to keep our stocks.

For now, Nasdaq has been the weakest, but this is not unusual considering it rose so far, so fast. The other indexes are generally holding up and once interest rates back off, stocks will likely continue on their upward path. So technically, this is a pause within the major bull market. 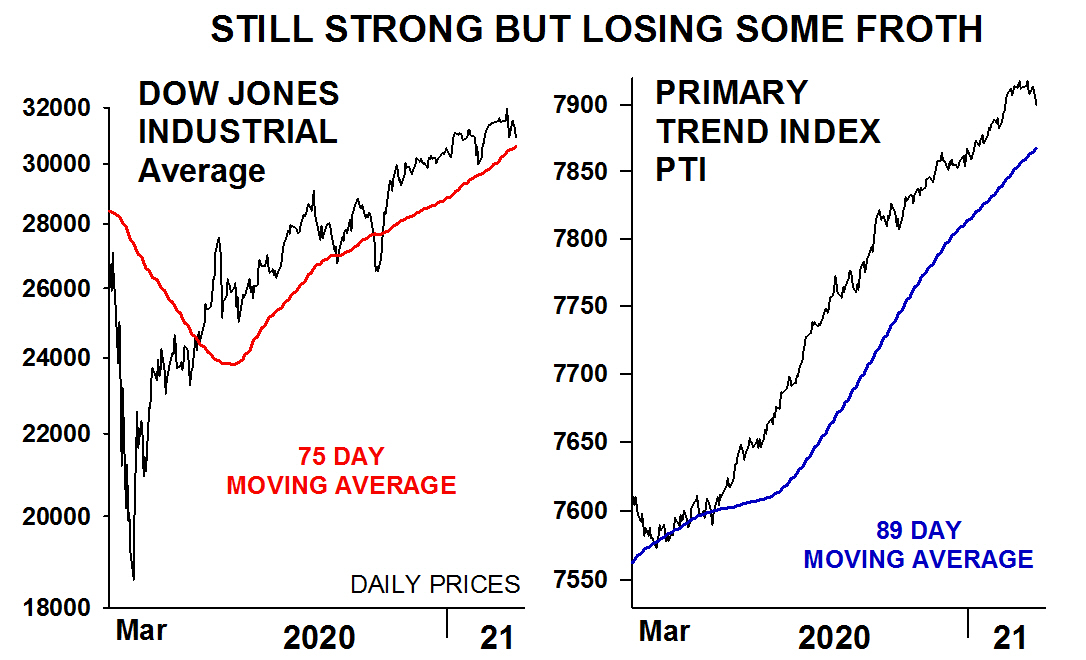