What History Says to Expect in October

Jeffrey Hirsch is a leading expert on seasonal trading and market timing. In his Stock Trader's Almanac, he looks at October's historic trading patterns and what this portends for the month ahead.

During the week ending October 10, 2008, Dow lost 1,874.19 points (18.2%), the worst weekly decline in our database going back to 1901, in percentage terms. March 2020 now holds the dubious honor of producing the worst, second and third worst DJIA weekly point declines.

The term “Octoberphobia” has been used to describe the phenomenon of major market drops occurring during the month. Market calamities can become a self-fulfilling prophecy, so stay on the lookout and don’t get whipsawed if it happens. 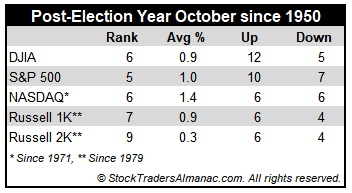 Despite the best average gain, NASDAQ actually has the worst record, declining in 6 of the last 12 post-election year Octobers. A 12.8% gain in 2001 boosts its average. Should a meaningful decline materialize in October it is likely to be an excellent buying opportunity, especially for any depressed technology and small-cap shares.