Even before the recent bear market hit, our safe defensive investments outperformed the broad market, and it is still the best approach, says Mike Larson.

Are we facing a worst-case scenario?

The absolute worst outcome to any threat that an analyst, investor, policymaker, or economist can dream up? Is it unfolding before our very eyes?

I’ve seen a lot of those kinds of scenarios in the 23 years I’ve been researching and writing about the markets. The ones that crossed my desk during the Great Financial Crisis of 2007-2009 were particularly grim.

But I’ve never seen anything quite like what’s hitting the tape now. The figures about the potential economic damage from the Coronavirus outbreak are simply mind-boggling.

These numbers are astounding and as much as we all wish they were unbelievable, plenty of people see them as plausible instead.

Let’s talk about that 30% unemployment figure for a minute, which was a worst-case scenario floated recently by St. Louis Federal Reserve President James Bullard.

How would that compare to what we’ve seen in previous economic crises and recessions? Consider this chart from Bianco Research: 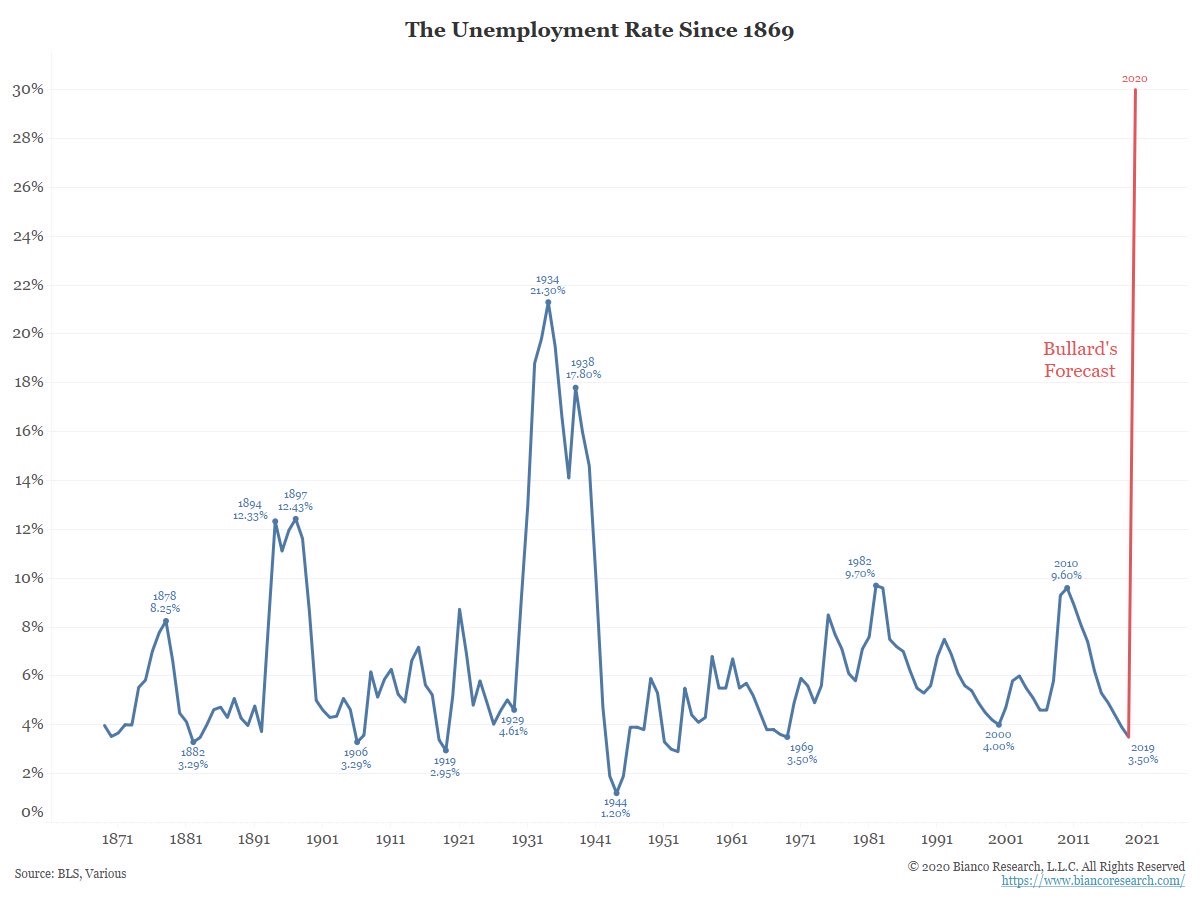 You can see that during the two worst modern recessions – the Great Financial Crisis of 2008 and the early-1980s slump driven by the highest interest rates in modern history – we topped out around 10%.

So, we’re talking about unemployment surging to more than triple anything most Americans have seen in their lifetimes unfolding this year. (Though the government figures have been manipulated to produce more positive numbers, the actual unemployment figures are and have been much higher when you figure in discouraged workers and other factors as the President use to remind us, before he was president).

Go back further and look at the Great Depression in the 1930s. Most of us have only read about it in the history books, or heard stories of how bad it was from our parents or grandparents.

But even during the worst of the years-long downturn, U.S. unemployment hit only 21%. The current worst-case scenario for employment is about 50% higher than that!

Will we hit 30% unemployment? It seems impossible. But is it really? Given the nature of this crisis, it’s a possibility, although ultimately nobody knows. With stay at home orders across most of the United States and only so many positions that can transfer to work from home, perhaps a better question is how long will we have to endure an extreme elevated level of unemployment?

The early numbers coming in from after the outbreak news started deteriorating certainly aren’t encouraging.

The Empire State Manufacturing Index plunged a record 34 points in just one month to -21.5 for March. That was the lowest since the Great Financial Crisis in 2009. A separate index for the Philadelphia region swung from positive 36.7 to negative 12.7, far worse than the +8 that economists expected. These kinds of moves are simply staggering.

Policymakers are responding with everything they can to head it off. I told you last week how the Federal Reserve slashed interest rates back to zero, backstopped commercial paper and municipal bond markets, and opened “swap lines” with foreign central banks to make it easier for the world to obtain U.S. dollars several days ago.

This past Monday morning, the Fed went  “all in” with even more action. It said it would shift from a $700 billion QE program aimed at Treasuries and residential Mortgage Backed Securities (MBS) to an unlimited buying plan. It also added commercial MBS to the mix.

This is basically the “Mother of All Bazookas” being fired by monetary and fiscal policymakers. It’s much broader and more aggressive than what we saw in 2007 to 2009, and it has all been rolled out in a much shorter timeframe.

Bottom line? I’m not a health expert. I’m not a doctor. I’m here to stay focused on the investment implications of what’s going on in the world, because that’s how I can best help you preserve and grow your wealth during these unprecedented events.

And right now, this is what we have:

1. An aggressive fiscal stimulus bill is and has been what investors wanted. Now that they’re getting it, it has prompted stocks to rally. The Dow Jones Industrial Average surged 11% on Tuesday alone, its biggest one-day percentage rally in 87 years, and that rally could carry for a little while.

2. Unless and until the underlying virus trends turn for the better, any rallies will likely be used by others to lighten up and/or rebalance into less-risky investments. I suggest you do the same.

3. Even when we get through the acute, enormous economic stresses tied to the virus, which we will —we still have to work off the wild asset market valuation excesses and extraordinarily reckless lending, borrowing, and investing imbalances of the last decade. That takes time – and it means lower prices for assets artificially puffed up in the process.

In short, there is no logical reason to waver from the “Safe Money” investment approach I’ve been advocating since early 2018.

There is no reason to underweight or avoid safer assets like gold, whose price just shot up more than $100 an ounce on Tuesday.

There is no reason to go back to investing 100% of your money in stocks, rather than maintaining a much higher reserve of cash.

And there is no reason to completely ignore some of the worst-case scenarios being bandied about and factoring them into your decision making when it comes to both investment and personal finance choices.

I don’t know if they’ll come to pass. I hope not. But a little bit of preparation and adaptation – just in case – goes a long way. 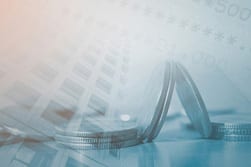 Income and Precious Metals Investments in High Demand
7 hours ago

Markets & the Economy Are Disconnected
7 hours ago

The greatest fallacy for traders and all of us is that the equity markets reflect the health of the ...