Yesterday we pointed out how recent weak performance in the Pharmaceutical sector was an opportunity to catch a reversion breakout. While our example of the big pharma exchange traded fund VanEck Vectors Pharmaceutical ETF (PPH), is a strong candidate, we wanted to dig a little deeper and highlight one of its strongest components, we found it with pharmaceutical giant Merck and Co. (MRK).

Shares of Merck seem to be in the early stages of a breakout bucking the trend of similar companies more reliant on potential Covid-19 vaccines (see chart below). 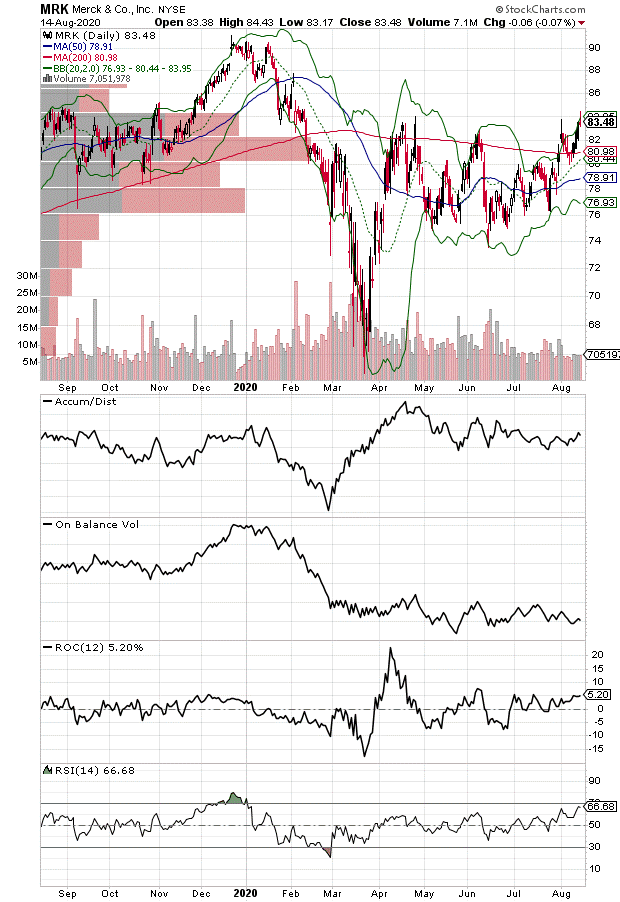 Stocks of large pharmaceutical and biotech companies have been disappointing of late as the reality and uncertainty of Covid-19 treatments hit home with investors, which is why the price action in Merck is worth noting. Sure, Merck has some credible entrants in the Covid-19 vaccine race, but those are long shots from a profit standpoint compared to its proven cancer franchise and its potential blockbuster anesthesia reversal drug.

Specifically, Merck owns the lung cancer treatment space with Keytruda, where sales reached nearly $4 billion in the last quarter alone. Moreover, its Lynparza drug is also leading the fight against ovarian and related cancers, giving MRK a credible and advantageous one-two punch in the cancer space in the present while it further enhances and develops its deep cancer pipeline.

Merck has a potentially emerging blockbuster drug in Bridion, which could be a nice icing on the profit cake. This is a drug which reverses the induced paralysis required for many surgeries and which it does with fewer side effects compared to competing agents. Critically, it is especially better than the traditional drugs in respect to the respiratory problems which could occur in the recovery room due to a return of paralysis if it is not fully reversed. In addition, studies have proven that the higher cost of Bridion is worth the expense as it reduces risk and costs, which would ensue if there were major post-operative complications due to a return of the paralysis in some patients.

Furthermore, MRK is knocking on the door of what could be a major technical breakout with key short term resistance at $84 to $86 and the potential for a move to $90 in the short term. Also, the Accumulation Distribution and On Balance Volume indicators have turned up while raw volume and Volume by Price are very favorable. Finally, the company recently gave upbeat guidance for the rest of the year; a move above $90 could take the stock significantly higher.

I own shares in MRK and recently recommended the stock to subscribers of Joe Duarte in the Money Options.com.

Joe Duarte is a former money manager, an active trader and a widely recognized independent stock market analyst since 1987. He is author of eight investment books, including the best-selling Trading Options for Dummies. For a FREE trial to Joe Duarte in the Money Options.com, click here.