This Chart Shows a "Startling" View of Complacency

Nothing has occurred to alter our forecast of a huge bear market to come and our long standing bear market target low of Dow 14,719, approximately 45% down from here. Stocks remain massively overvalued, warns Alan Newman, editor of Crosscurrents.

The only change we admit to is the following; the mania underway has been driven by professionals, not individual investors ("the public").

The public has been looking for the exits since the 2009 debacle and given the size of the Baby Boomer segment of our population, it is clear they are no longer providing anywhere near the sponsorship they provided in the past.

As recently as 2010, Boomers represented about one-quarter of the population but time has taken a toll and Boomers are now perhaps only 20%-22%.

Investors traditionally turn to safer investments as they age and we see this trend in mutual fund inflows. Over the last ten years, domestic equity funds have suffered $1.5 trillion in outflows.

So, how do prices remain at these levels? We see an astonishing parallel to the "Nifty Fifty" era, when Groupthink ruled, taking stocks to ridiculous valuations. The broad market peaked in 1968, fully four years before the ultimate high in January 1973.

Over the next two years, prices were cut in half. At that time, Groupthink allowed no other views — there were simply too many stocks labeled as "one decision" only. Buy. As a result, complacency was universal.

We have a similar situation in place today. This chart illustrates a startling perspective of complacency. Since May 17, 2017, there has not been one instance of outright fear or panic for Nasdaq. 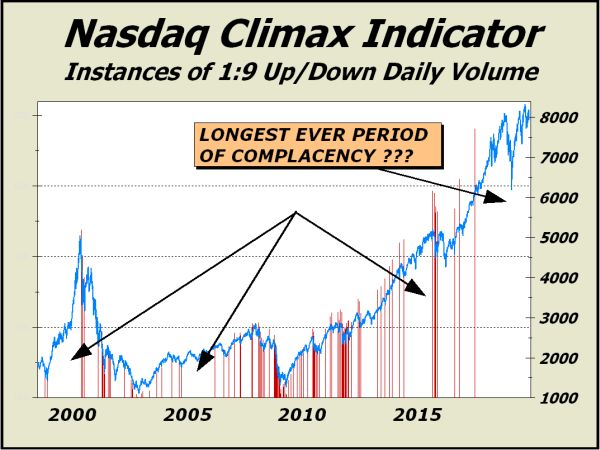 There was a long period of complacency into the 2000 tech mania peak, which was followed by stocks falling 50% over two years.

Although our highlighted period between 2005-2010 on our chart was not immediately followed by a significant decline, prices were far lower a few years later into the 2009 bottom. The 2015 instance was followed by a decline of nearly 20%, just missing the so-called official definition on a bear market.

The current period of complacency has lasted 597 sessions, as far as we know, the longest such period in the history of Nasdaq.

For confirmation, the latest numbers from the Investors Intelligence of investment advisors shows bulls over 55% and bears down below 17%. Both are at extremes and infer a top of consequence could very well be at hand.

Here’s a quick recap of my favorite recession-proof stocks that should not only hold steady du...

I have been searching for a good gold stock. I think I have finally hit pay dirt with Canada’s...

Eventually, a reliable vaccine will be developed, the coronavirus will be history, and we’ll o...