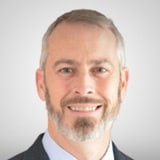 Platinum is trading at an all-time low relative to gold, and those who buy now can capitalize on a truly historic opportunity that will pay off handsomely when fundamental factors converge and normal prices are restored.

The next time someone asks you if you’d rather have an ounce of gold or, an ounce of platinum you might want to think about your answer. Platinum’s relative value to gold has plummeted over the last two months. In fact, platinum is currently priced $140 less per ounce than gold. This is the lowest value I could come up with using the entire history of the platinum and gold futures markets.

See previous: The Metal That Will Outshine Gold

There have basically been three periods when platinum traded at a discount to gold, and all three of these periods were characterized by fearful economies.

The first period, from 1980-1983, saw platinum bottom at a price $131 less than gold. We also had a total of six quarters of negative GDP growth during this period.

The second period was 1991-1993. We only had two quarters of negative GDP during this period.

We are currently in our third period of platinum’s discount to gold and we’ve had four consecutive quarters of negative GDP, finally ending in the second quarter of 2009.

The three periods of platinum’s discount have averaged more than 15 months in duration. The historical selloff in this market fits right in with the volatility we are growing used to. Therefore, we must focus on the underlying dynamics to predict the next range of volatility.

All three of these periods have been defined by recession, declining consumer confidence, and household deleveraging. Perhaps the clearest measure of this is through the Federal Reserve Board’s Household Debt Service Ratio data. This measures how much debt Americans carry relative to their disposable income.

Declining sentiment can be measured by the amount of debt we carry relative to our expectations for economic growth.

Debt is the first thing that is shed as the economy sours, and we may be nearing the bottom of this debt-shedding cycle. Prior to the personal debt explosion of the 2000’s, American’s debt-to-disposable-income ratio tended to trade in a range of 10.5%-12%. While this may seem like a tight range, consider the effects of your own personal debt varying by nearly 15% and you’ll get an idea of what that range feels like to the average American consumer.

The debt boom peaked in Q3 of 2007 at nearly 14% of disposable household income. Currently, we have pulled back to just over 11%. This puts us near our historical trough levels. However, it is important to remember that trends tend to overshoot on the downside just as much as they do on the upside. Therefore, I would expect to set a new record trough in terms of household deleveraging some time in 2013.

This is one of the rare opportunities to watch a truly macroeconomic trade made in the commodity markets. The industrial demand for platinum is fueled by the government’s mandated shift to ultra-low emission vehicles (ULEVs) as well as the global growth of the auto industry, which is heavily based on platinum use in catalytic convertors.

Furthermore, the speculative nature of the gold market’s rally will eventually fall of its own weight when some degree of certainty manifests itself in the global markets.

The average ratio of gold to platinum is more than 1.5 times. This ratio is obviously negative at the moment, as we are currently at an historical low. I expect resolution of the European banking crisis and a resumption of normal business operations to quickly snap this market back to a normal pricing structure. Once this happens, the market should continue to build a base as individual populations work their own debt issues out.

Finally, I expect to look back in time and be grateful to have seen this once-a-decade opportunity well in advance of the market’s turn.