Is There a White Swan?

The only time we don’t get a Santa rally is during a confirmed bear market. If the reaction doesn’t come within the next week, odds shift to it not happening until January, says Jeff Greenblatt, director of Lucas Wave International and editor of The Fibonacci Forecaster.

Thursday, October 19 is the 30th or 360th month anniversary of that famous day. But do you realize we are also in the 618th calendar day from the February 2016 bottom? Do you realize it’s also Fibonacci 89 weeks? Not only that, it’s also 610 trading days from the May 20, 2015 peak which led to the last real correction in the market since 2011. 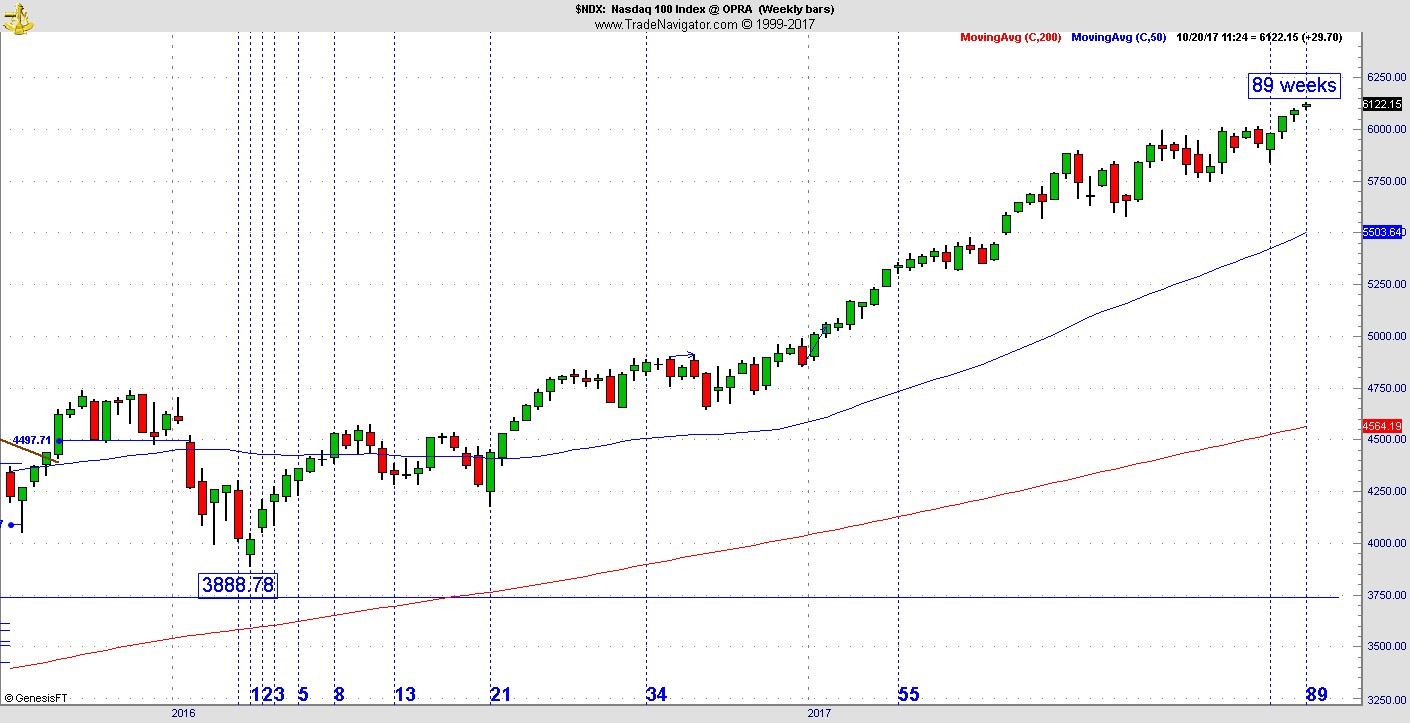 We are not out of the woods yet.

We’ve all heard of black swans but what about the anti-black swan? In other words, a white swan. During the course of this time season, we’ve had several good news events, some of which were not expected. Many were hoping for tax reform but can’t trust the do-nothing Congress anymore. It appears there will be tax reform.

But in the past week, the president is looking to end Net Worth Sweep, the program of subsidizing the insurance companies to keep the health care system going. As you know, Treasury Secretary Steve Mnuchin appeared on Maria Bartiromo earlier this year and admitted they were taking money from Fannie Mae and Freddie Mac to keep it going. Last week Trump pulled the plug on it. However, now a bipartisan group in Congress is looking to keep subsidies going but it’s unclear exactly how they will do it. The market liked the proposal because it appeared on the surface that it was finally a real first step towards relief to the consumer who has seen premiums go through the roof.

Next on the agenda was the decertification of the Iran deal. Many favored this outcome because they don’t want to see the same result down the road as we are experiencing right now with North Korea.

Why are we talking about this in a stock market column? Since we’ve come back from the Labor Day there has been a string of lemons that have been turned into lemonade. The debt ceiling can was kicked down the road without the usual drama. As terrible as the storms were, the financial system survived to help those who needed it. Even when there was a real potential black swan with the Las Vegas attack, markets rallied. There is still no war with North Korea.

Imagine if one or more of these events had gone the other way. Nevertheless, markets tend to top on good news, or in the case of the 1930s extremely bad news. Since Lord Rothschild has compared the present situation to the 1937 market, there has been ample opportunity to turn on bad news. In the past week, Iran decertification and potentially ending Net Worth Sweep are no small accomplishments, these are fork in the road events that can change a nation’s destiny.

Risk remains high, there is no doubt about that. It is still prudent to take things one step or day at a time. But soon the seasonal aspect will start to dominate.

The only time we don’t get a Santa rally is during a confirmed bear market. The bottom line for now is if the reaction doesn’t come within the next week, odds shift to it not happening until January.