Tesla valuation estimates have widened from a per-share low of $195 to a high of $4,000, after CEO Elon Musk tweeted plans on Aug. 7 to explore taking the electric car company private prior to announcing on Aug. 24 that it would stay public, writes Paul Dykewicz.

Tesla Inc. (TSLA) definitively indicated in a website blog that Musk and his board of directors agreed to keep the stock publicly traded, despite short sellers on the prowl to torpedo the company’s valuation. Indeed, Tesla valuation estimates from traditional stock analysts and other experts now diverge substantially and leave investors able to find reasons to sell shamelessly or to buy boldly.

Brian A. Johnson, an automobile company analyst with Barclays, wrote in an Aug. 27 research note that he projects a 35% downside to $210 a share from Tesla’s current price, partly due to “cracks” in the credibility of Tesla’s leadership after the Aug. 7 tweet by Musk about taking the company private and his Aug. 24 reversal. Barclays previously expressed doubt about whether Tesla could go private and still retain more than 2,000 non-institutional investors, including 500 non-accredited backers, if the company no longer traded publicly.

“One of the key tenets of confidence for Tesla bulls is that the Model 3 will be the iPhone of cars,” Johnson wrote in his Aug. 27 research note. “We have consistently maintained that the bull case around Tesla is more faith-based than fundamental valuation based.”

The first key element is that Tesla will gain a dominant market share position in the auto industry similar to the way the Apple Inc. (AAPL) iPhone became the rage in the mobile phone arena. Tesla aims to turn its Model 3 into the middle-class electric car of choice with a $35,000 price and has produced 400,000 reservations for the vehicle.

The second key element is that Tesla would “disrupt” other industries, including trucking/transport, mobility, energy, generation/storage and even insurance.

However, the Tesla valuation of $210 a share by Barclays in the next 12 months projects the company as a “large niche player” but its true present value is “only $143” a share, Johnson wrote. The focus now shifts to Tesla’s third-quarter financial results when its management has promised the company will be cash flow positive, Johnson wrote. 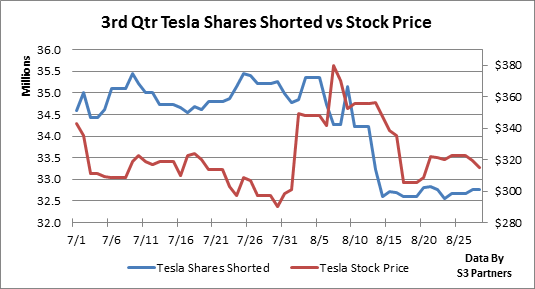 Catherine Wood, chief executive officer of ARK Invest, wrote an open letter to Musk and his board of directors on Aug. 22 that pleaded to keep the company public and fulfill its potential valuation within five years of $700 to $4,000 a share. If the company was privatized at the $420 a share price that Musk proposed, Tesla would be undervalued and deprive many investors of an opportunity to participate in its future success, she wrote.

“Our $4,000 per share price target assumes that Tesla evolves from a hardware manufacturer with 198% gross margins to a company generating most of its profits from Mobility-as-a-Service (MaaS), a business that we believe will enjoy 80% gross margins,” Wood wrote in her letter. “In the $4,000 scenario, our assumptions are conservative: we incorporate profits only from cars and certain autonomous taxi networks, not from trucks, drones, utility scale energy storage or the MaaS opportunity in China.”

Wood, who also is the head of a technology-focused mutual fund company, ARK Investment Management LLC (ARK), said her Tesla valuation accounts for roughly $20 billion in dilution that might be necessary to “penetrate and scale” the latter four markets of trucks, drones, utility scale energy storage or the MaaS opportunity in China. In an ARK white paper that I obtained, the investment firm raised the possibility that the traditional automotive industry may be “subsumed” by Mobility-as-a-Service platforms that could become one of the most valuable investment opportunities in public equity markets.

--Autonomous taxi services would become commercially available in 2019 and should be the dominant form of door-to-door mobility by the late 2020s.

--Self-driving taxis will cost consumers $0.35 cents per mile, or roughly half of the all-in cost car owners now pay to drive, thanks to much higher utilization rates. These “compelling economics” should drive widespread adoption of autonomous taxi networks.

--Traffic will rise almost three-fold by 2030, as autonomous taxis will allow the non-driving population, including the blind, elderly and young teens, affordable and convenient transportation options.

--Autonomous cars should cause a shift away from personally owned vehicles, depressing global auto sales volumes in the coming decades. ARK’s research shows that auto sales will fall by nearly half in developed markets. In the developing world, auto volumes likely will increase over the long term, but at a rate much slower than expected today.

“Clearly, most asset managers in the public markets do not agree with us, which is why I am writing to you now,” Wood wrote.

One of those skeptics is Hilary Kramer, a Wall Street investment professional who recently recommended the sale of Ford Motor Co. (F) in her Turbo Trader and Inner Circle advisory services. Kramer told me unequivocally that Tesla would not reach $4,000 a share in five years.

“It is outlandish to say that Tesla can be worth $4,000 a share because that would imply an $680 billion market capitalization,” Kramer told me. “That is simply not happening.”

Dr. Mark Skousen’s Forecasts & Strategies investment advisory service produced a 64.1 % return in then-struggling Ford between December 2009 and January 2011 but he is not investing directly in Tesla as the company seeks to become profitable. However, Skousen is recommending ARK Innovation (ARKK), which has zoomed more than 32 % since he advised his Forecasts & Strategies subscribers to buy it on December 18, 2017. Tesla is the fund’s top holding with an 8.75 % share at the close of trading on Aug. 28.

Skousen described ARKK as “one of the most successful ETFs in history.” It already has more than $6.6 billion assets under management and three of ARKK’s funds are among the ETF leaders ranked by Investor’s Business Daily. The actively managed ETF focuses on five current innovations: automation, energy storage, DNA sequencing, next-generation internet and blockchain technology.

The use of Golden Sachs as a financial advisor led its auto analyst David Tamberrino, who previously had given Tesla a $210 price target, to announce on Aug. 15 that the firm would move the stock to “not rated.” As a financial advisor, Goldman Sachs gained access to information that is “fundamental” to a reasonable analysis of Tesla’s rating and 12-month price target, according to Goldman’s Americas Investment Review Committee.

Tesla short selling interest is valued at $10.46 billion, totaling 32.77 million shares shorted, or 25.70 % of the overall 170.59 million shares outstanding through Aug. 27, according to S3 Partners, a financial technology company. Short sellers seek to profit when a company’s share price falls, while they lose money when the share price climbs. 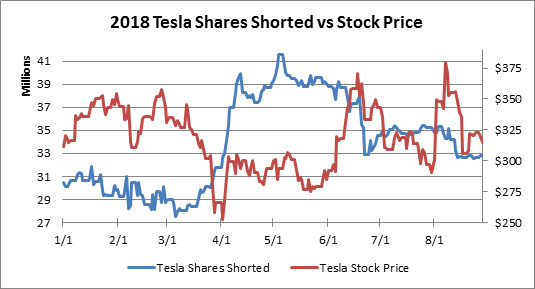 The highest Tesla valuation depends on whether investors are willing to give its prospects for Mobility-as-a-Service the same lofty levels as ARK Invest. With the end of the third quarter coming on Sept. 30, Tesla will have its next chance as a public company to show its progress in manufacturing its Model 3 cars in sufficient numbers and selling them well enough to achieve Musk’s goal of becoming cash flow positive.

Watch Mark Skousen: Five stocks that could be the next trillion dollar companies here.