Along with the rest of the equities market, shares of Dublin-based aircraft leasing firm AerCap (AER) have bounced higher from their Dec. 24 closing lows. Through Tuesday's close, the stock had advanced about 36% from that year-end trough— although, at last check, it looks like AER's two-week-long attempt to break out above resistance at its 200-day moving average will be an unsuccessful one. In fact, the equity's rally could pose an ideal opportunity to bet bearishly on the stock, if the presence of two historically significant trendlines is any indication.

First up is AER's 52-week moving average, which is located just below the $51 level. AER settled Tuesday within one standard deviation of this trendline after two consecutive weeks below it, and previous such tests of resistance here — of which there have been nine over the past 15 years— have yielded pretty uniformly negative returns. Over the next four weeks, AER's average return is a loss of 6.81%, with only 44% positive. Looking out three months, the average return is a 3.25% drop, with 33% positive.

The setup is similar with AerCap stock and its 80-week moving average, which is just north of $51. Following nine previous tests of resistance at this trendline, the stock's average four-week return has been a drop of 7.03%, with only 33% positive. Over a three-month time span post-signal, the average return narrows to a drop of 2.59%, with 44% positive. 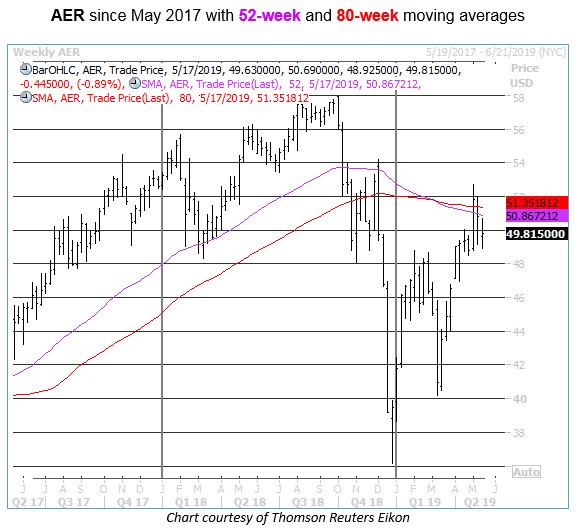 Based purely on these technical signals, it looks as though AER could be poised for a quick, sharp move lower in the immediate weeks ahead, followed by additional downside over the intermediate term. Using Tuesday's closing price of $50.26 as our starting point, these twin sell signals target a move by AER down to around $46.80 by this time next month. And to make matters even more troubling for the stock, AER has slipped below the $50 level in Tuesday’s trading, which means this round-number price point could exert additional psychological resistance.

Potential analyst downgrades could also push the shares lower. The shares boast five "strong buy" ratings, compared to just two "holds" and one "strong sell." If the technicals for AER continue to deteriorate, any bearish notes from this group could unleash additional selling.

That's particularly true as short interest on AerCap continues to roll higher from March's multi-year low. A 4.4% uptick in short interest during the most recent reporting period indicates that bears are beginning to smell blood in the water, and a continued ramp in this shorting activity could translate into a steady headwind for AER going forward.

Meanwhile, those looking to bet on more downside for AER may want to consider the stock's short-term options. With the company's first-quarter earnings report in the rearview, volatility expectations are fairly low for the June series, which means put buyers are in a better position to leverage a bearish price move. Specifically, Schaeffer's Volatility Index (SVI) for AER is 25%, which ranks in the 30th percentile of its annual range. This indicates that short-term options on the equity have been cheaper, from a volatility standpoint, only 30% of the time in the past 52 weeks.