Roll with the Market Trend, But Remember that it Will End Badly

This is not a low risk market. Yet it’s the perfect time to follow Marty Zweig’s advice: “Don’t fight the Fed and don’t fight the market’s momentum.”

It certainly is a weird market and a stranger world, so it’s not surprising to expect that the party could be over at any time. But even though things are messy, it doesn’t feel like 1999 or 2007 yet. What is evident is that as the wall of worry rises and the endless talk about asset bubbles and recessions overwhelms the airwaves and the financial pages, the stock market rally is picking up momentum as the Federal Reserve has made it as clear as it can that it is on the verge of a new easing cycle.

More importantly, the bond market has not broken above its recent yield down trend, which suggests that as long as external events, such as the U.S.-China trade war and the election cycle don’t get out of hand, the stock market is more likely than not on its way to new highs.

It’s time to put MEL to a Test

Familiar readers are plugging into my Market, Economy, Life Stream concept, (MEL) where the actions of the financial markets, the economy, and individual and family life decisions converge into a streaming continuum of activity forming a self-perpetuating cycle.

Now, however, because of the repeal of Glass-Steagall there is no dividing wall between the economy and the markets. And given the presence of market trading algorithms in world where there is total interconnectedness, the 24-hour news cycle and social media, the markets have more of an effect on the economy than vice versa and the effects of one on the other are rapidly transmitted from the former to the latter.

The Markets Lead the Economy and the People

Conventional wisdom suggests that we are heading into a recession due to the U.S.-China trade war, the fact that many in the middle class have not recovered from the Great Recession and the end of the economic expansion are upon us.

Certainly, things could change in a hurry and the whole world could crash and burn. And it’s hard to argue with the fact that the U.S. economy is slowing while many in the U.S. are struggling financially. Moreover, economic conditions in the rest of the world seem to be fading even faster.
Yet, if I’m right, because MEL is all about the markets, the economy, and people’s life decisions moving together in the same direction, as the Fed eases and the news spreads, if there is a recession it may not be as deep or as widespread as the mainstream line of thinking expects.

Accordingly, based on the basic tenets of MEL and the market’s current behavior, I expect that the positive psychology of lower interest rates, new highs in the stock market, and a stable bond market – barring a meltdown in the latter – will positively impact the major tools of current wealth: the 401K plan and the home equity line of credit (HELOC), which will translate into a continuation of the economic expansion, justifying the new highs in the market.

Housing stocks have been a hit and miss affair all year, but there are two companies which should benefit from the current economic climate as long as bond yields and mortgage rates don’t start a nasty rising cycle and the job market doesn’t collapse.

One of the two is Skyline Champion (SKY) a designer and builder of mobile and modular homes. With tight incomes, high demand for housing and rising prices for traditional single-family homes, SKY offers potential homeowners a lower price alternative, especially for first time buyers (see chart).

The company has a large share of the mobile market, has its cost structure under control and has recently offered positive guidance, which is rare in the homebuilder sector in these turbulent times. Furthermore, it’s expanding its U.S. manufacturing capacity, which suggests management is not just positive about the company’s prospects but that it’s aware of the changing global landscape for businesses due to tariffs and related matters and is making a big bet on the United States, where the economy and the demographics are in their favor. This is likely fueled by the 15% year-over-year growth in SKY’s U.S. home sales, rising per unit average pricing, and growth in revenues, gross profit and margins.

In the short term, the stock may gain further ground if its FEMA, hurricane season sales, pick up.

The second stock is LGI Homes (LGIH) a regional homebuilder, whose shares broke out of a multi-month base on July 12. LGIH is well positioned for growth via its widespread footprint in the Southern and Western U.S., especially in Texas, the Carolinas, Florida, Oklahoma, Alabama, Nevada, Tennessee and Georgia, all areas which should benefit from the migration from high tax states and stable employment, a MEL related dynamic. LGI recently reported record breaking second quarter 2019 home closing numbers with earnings due out on Aug. 6. 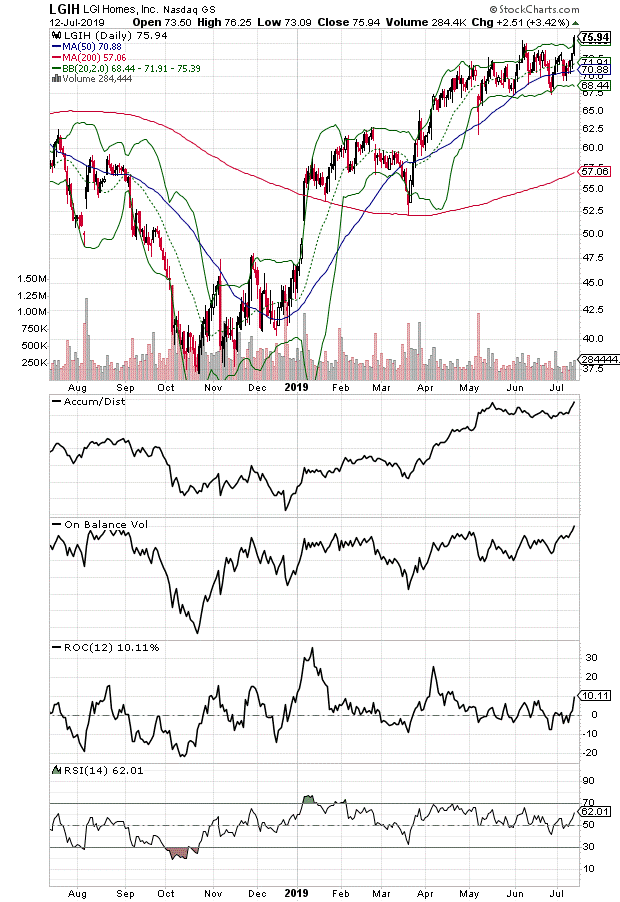 Both SKY and LGIH have positive money flow statistics including Accumulation-Distribution and On Balance Volume.

Once again, the New York Stock Exchange Advance Decline line (NYAD) the most accurate indicator of the stock market trend since the 2016 presidential election made a new high this week, building upon last week’s new high. 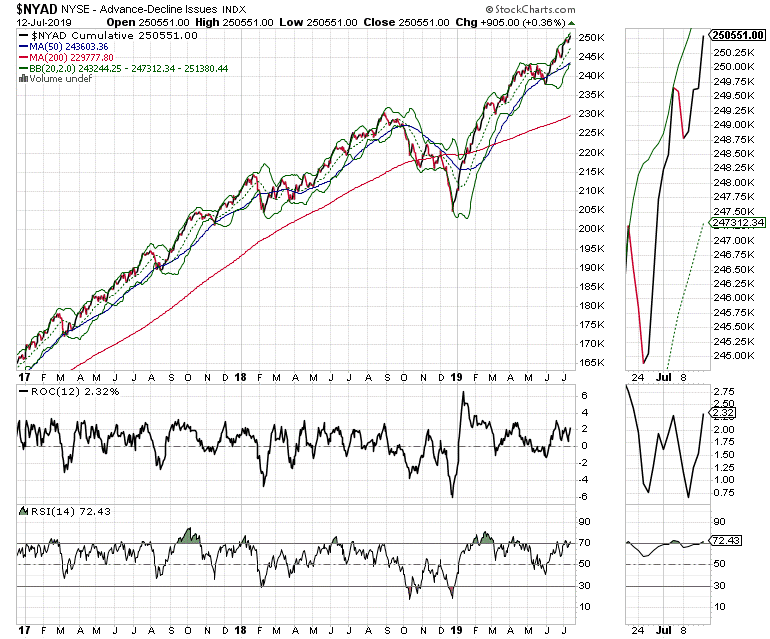 Furthermore, NYAD’s new high was confirmed by both the S&P 500 (SPX) and the Nasdaq 100 (NDX) indices creating a positive convergence suggesting higher prices ahead. 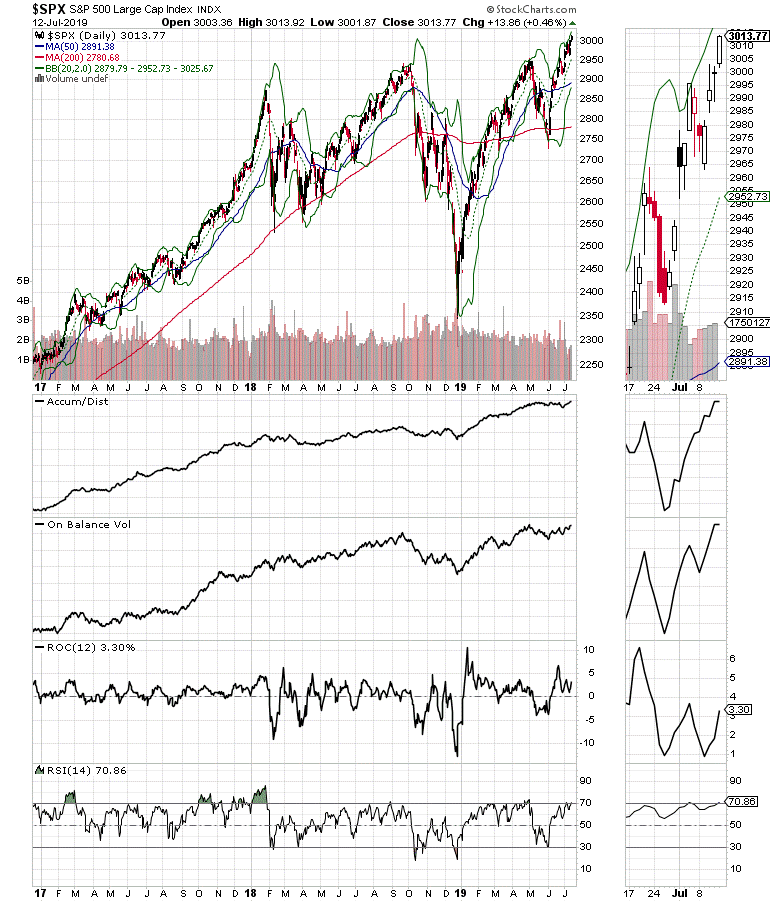 Perhaps the most encouraging sign is that the rally is starting to broaden to include sectors beyond technology, which is both a bullish and practical sign for stock investors as when more stocks rise so does the chance of picking winners.

Roll with the Trend

We seem to be in the early stages of what could be a profitable momentum run for stocks based on new highs on NYAD confirmed by new highs on the major stock indexes. Thus, the burden of proof is now on the bears.

Therefore, if the wall of worry is in place, it makes sense to stay long the market via a sound trading plan. Trade with the trend but be aware that momentum markets always end badly. Let your winners ride while cutting losses early.

I own, SKY and LGIH as of this writing.