The Dollar Trend May Be Flipping

Fed Chairman Powell may have signaled a reversal in the dollar trend vs. the euro, reports Matt Weller.

Twice per year, the Chair of the Federal Reserve makes the trek down Constitution Avenue to update Congressional leaders on the state of the U.S. economy. This event, called the Humphrey-Hawkins Testimony after the lawmakers who initially created the requirement back in 1978, offers a longer-term perspective on the outlook for the U.S. economy and is closely watched by traders looking for insight on Federal Reserve policy over the next six months.

Unfortunately for those traders, today’s iteration of the testimony offered little in the way of actionable nuggets. Across prepared comments and a Q&A session, Fed Chairman Powell reiterated his cautiously optimistic outlook for the U.S. economy, noted the potentially disruptive impact of Coronavirus and climate change, and emphasized the importance of achieving maximum employment, even if it required a temporary overshoot in inflation.

Though he suggested that the Fed would gradually transition away from the active use of repo operations (the infamous “not QE”), he noted that the central bank would likely continue such purchases into the second quarter.

With Powell opting not to upset the proverbial apple cart, traders saw little reason to tweak their current positions. At the margin, U.S. stock indices did fade from their record intraday highs to trade closer to breakeven levels as we go to press. Meanwhile, the U.S. Dollar Index also fell to trade lower on the day, even though traders slightly reduced bets on a near-term interest rate cut from the Federal Reserve. According to the CME’s FedWatch tool, fed funds futures traders now think an interest rate cut is more likely than not starting with the Fed’s July meeting, whereas traders were pricing in such a move in June yesterday. 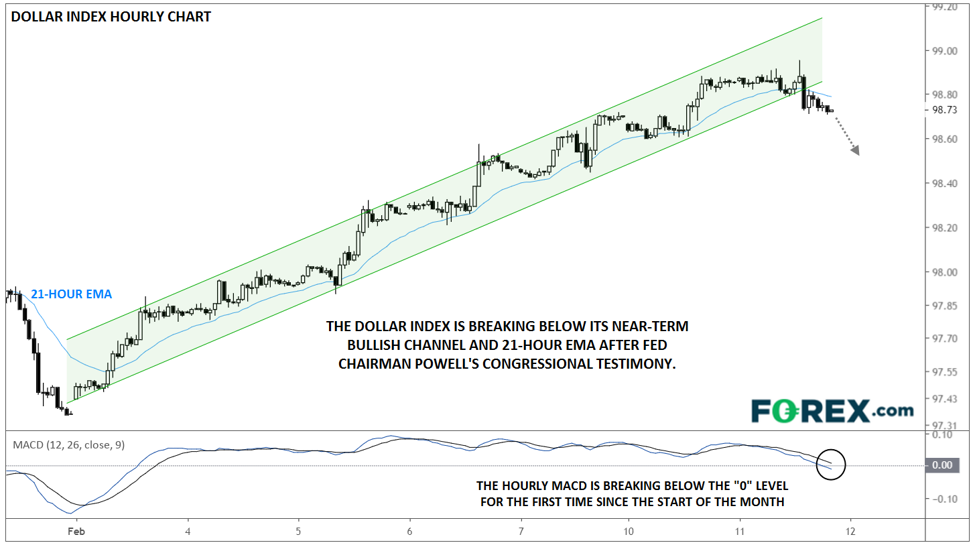 Looking at the above hourly chart of the dollar index, today’s price action may mark the end of the dollar’s recent short-term bullish trend. Or even the longer-term bullish channel against the euro (see technical view of this from John Rawlins). The index has dropped meaningfully below its 21-hour exponential moving average for the first time since the start of the month, breaking below its rising channel in the process.

This price breakdown, combined with the simultaneous break in the MACD indicator below its “0” level, signals that momentum in shifting in favor of the bears, opening the door for a deeper retracement toward the lower-98.00s or 98.00 even later this week.

If seen, this bearish move in the greenback could correspond to a rally in EUR/USD toward 1.10 and a drop in USD/JPY toward 109.00.

When U.S. economic news is dominant, moves in the dollar can overwhelm any currency in its path and ...

The euro has broken outside of both near-term support and resistance, but remains a bear until it fa...

Here is a breakdown of last week and what reports are due in the week ahead, from Joe Perry....