It’s no secret that investors are always looking for the next big thing in the stock market. New technology and renewable energy ideas are particularly popular, which is why you’ll often see companies with little or no revenue trading at high valuations. It’s all about the potential.

Of course, that doesn't mean a company is necessarily going to reach its potential. Stock prices can fluctuate dramatically for these types of companies, precisely because their prospects are always in flux. Every time new information is made available, investors have to reassess a company's potential.

In recent months, the investment crowd has been very focused on alternative-fuel vehicles, such as electric and hydrogen-powered cars and trucks. The leader in this category is Tesla (TSLA), which always seems to be in the news. More recently, Tesla competitor Nikola (NKLA) has been grabbing headlines with its hydrogen/electric trucks.

However, just this week, a long-time player in this industry stole the spotlight with better-than-expected projections. Plug Power (PLUG) has been around since 1997. The company is known for its hydrogen fuel cells for vehicles, but, those fuel cells had always been based on hydrogen from natural gas—not the greenest of energy types.

That’s why it was big news when Plug announced the acquisitions of United Hydrogen and Giner ELX. These additions will allegedly allow the company to get 50% of its hydrogen from green sources by 2024. The company also raised its 2024 revenue target to $1.2 billion.

Sentiment on Plug appears positive, with roughly 90% of options activity bullish. Still, looking at the biggest orders, there seem to be mixed opinions on the company’s upside potential. 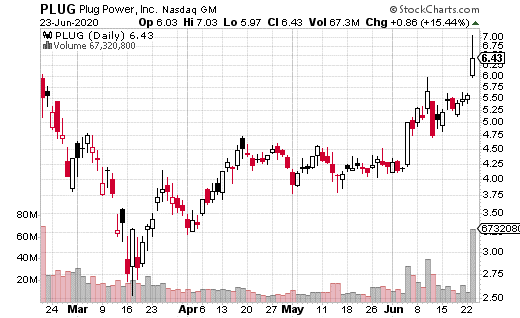 One trader was clearly bullish on the stock, grabbing nearly 1,500 of the Sept. 7 calls for $1.00, with the stock at $6.78. The stock price would need to be $8 or higher by September expiration for the trade to make money.

On the other hand, the largest single trade of the day was moderately bullish at best (and could even be considered bearish depending on your point of view). A trader sold just under 3,000 July 17th 7 calls with the stock at $6.79. These calls were sold for 57¢, which means break-even for the trade is at $7.57. Anything below $7 at July expiration means the trader keeps all 57¢ ($57 per option) in premium.
The July call sale suggests there is a cap on how far Plug will climb, at least over the next few weeks. On the other hand, the September trade is predicting a move above $8, but it has a longer time frame. Of course, with the different time frames, both traders could be right. That’s just one more advantage of options: traders can have very different viewpoints, and everyone can still make money in certain situations.

Jay Soloff is the Options Portfolio Manager at Investors Alley. He is the editor for Options, an investment advisory bringing you professional options trading strategies, with all the bells and whistles of Wall Street, but simplified so all you have to do is enter the trades with your broker. Want to Learn Butterflies and Condors? Join Me for a Live Training Session on Monday.

Crude’s Long Road Back
8 hours ago

Markets Withstand as Civilization Is Under Siege
11 hours ago