The Fed are now projecting one-three rate hikes in 2023. I always wonder about their crystal ball, explains Jeff Greenblatt of Lucas Wave International.

This is the problem I always have with the Fed. For the millions of businesses that have shuttered, I don’t think many people are too concerned about what happens in 2023. If everyone knew the long-term cycle picture points to a “hard down” in 2022, they might be in a better position to make informed investment decisions now. He did walk some of this back during his press conference, but the damage was done. Market participants have it in their minds the easy money days could be winding down.

The best commentary came from Gary Kaltbaum on FOX Business who said his biggest concern is the trading community being able to go about their business in “free” markets. Free is a relative term but now the markets may very well be under a cloud of a higher interest rate environment and a “hard down” cycle hypothesis could end up becoming a self-fulfilling prophecy.

The point here is the Fed spent the entire year printing money, which is the only reason the market is elevated. So how free has it been? Think about it, if the Fed doesn’t make these longer-term projections, the market could work with a clean slate where supply and demand would dominate the market. 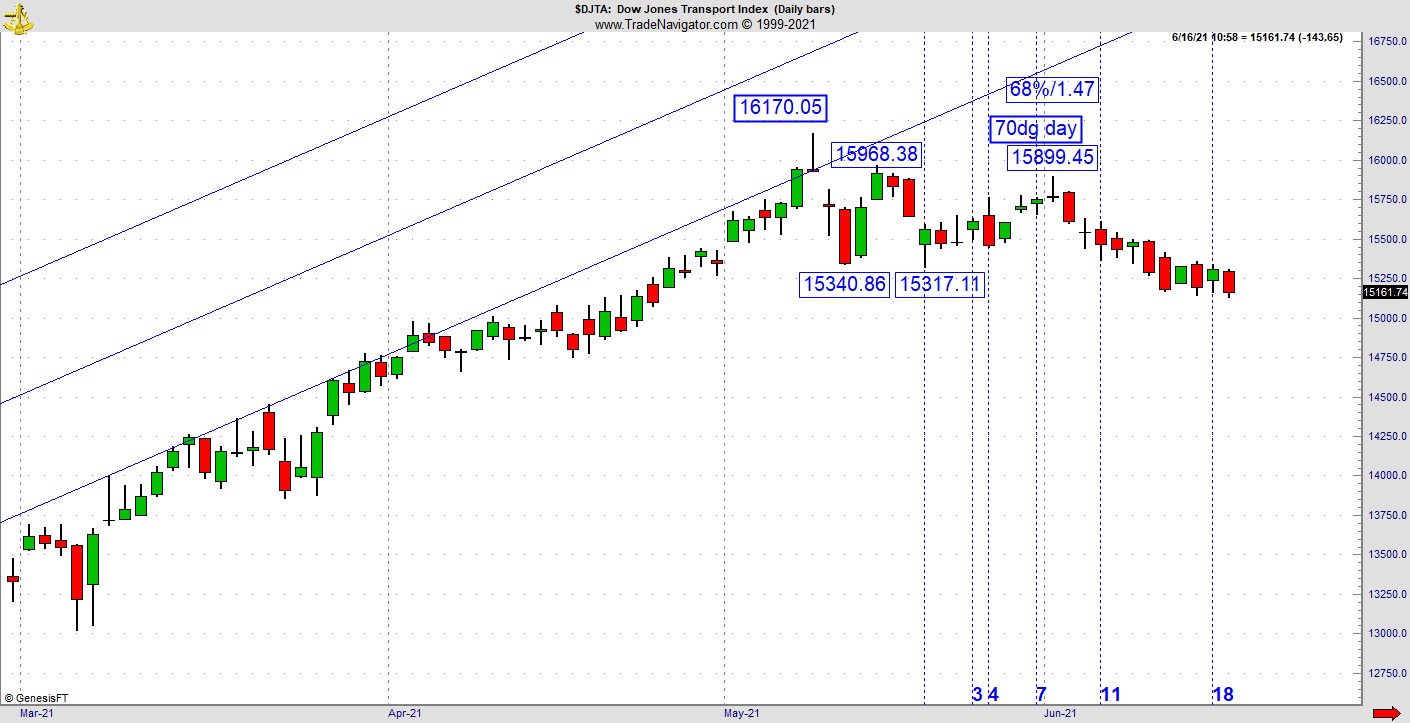 Last week I started talking about the BKX and Transports. Take a look at the Transports. It peaked on May 10. We see the high of 16170.05. The pattern started rolling over for real on June 1, which was the 70dg day of the year. When the candle formation printed a bearish engulfing bar the next day, that was the sell signal. 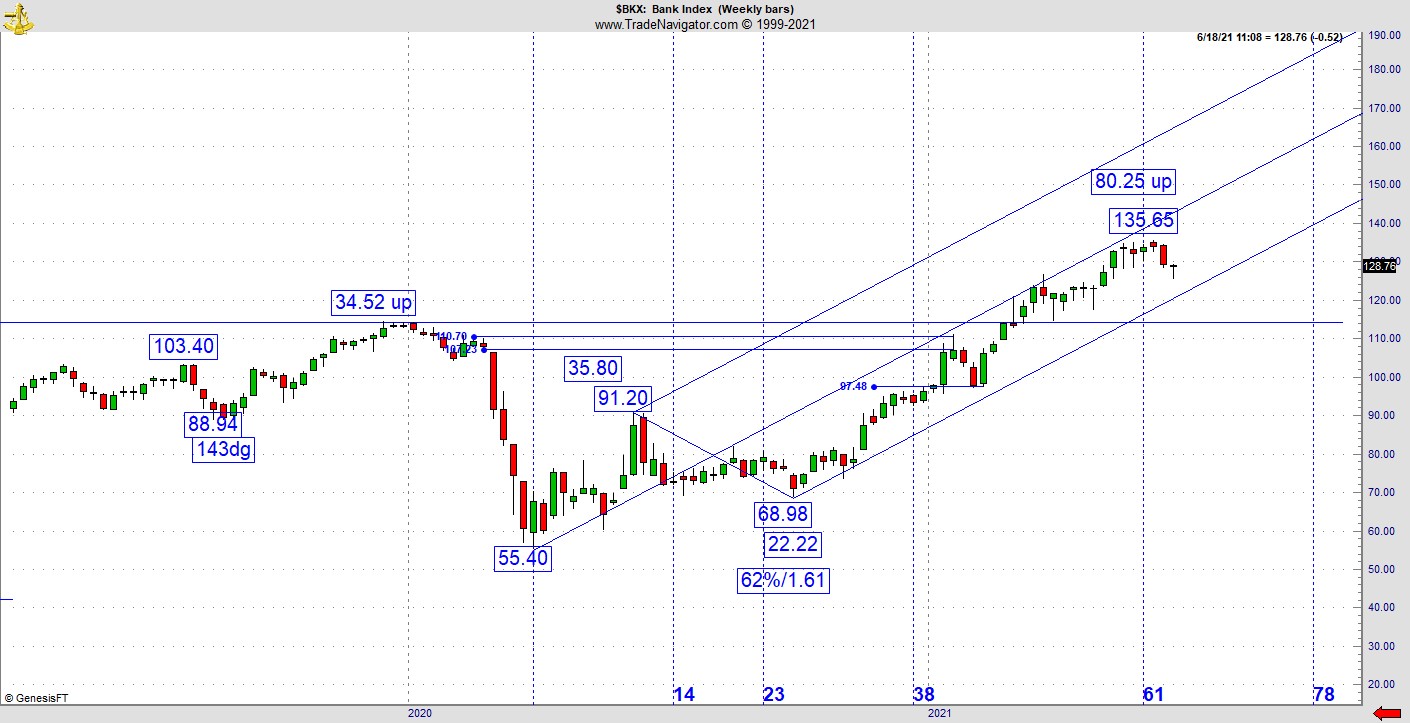 Here is the BKX weekly chart that has a 61-gold spiral harmonic as the major pullback early in the pattern was a 62%/1.61 retracement value, it peaked at 62 weeks. The likely target now is either ascending channel line just below or the prior high from December 2019. As former resistance it would have a chance to flip polarity and become support. If the day comes where that support area fails, then we have a much higher probability breakdown.

With the S&P 500 (SPX) sitting right at new highs, this is a clear divergence. Unless banks and transports resolve to get back in gear with the SPX, this is an early sign of trouble. Larry Pesavento coined a term. He says we need to trade what is in front of us, not something that might happen in two years from now. Listening to Kaltbaum express his frustrations with the Fed, I’m in 100% agreement.

As you know, we’ve been tracking Bitcoin. Last week’s setup at 161 bars and the 92% retracement was one of those moments I’ve been talking about as far as trading in the most psychologically difficult places is concerned. It was so psychologically difficult several experts went on record as saying the bounce phase was over. If you want to get in trades on a timely basis. If you want to get in with the better risk/reward ratios and not end up chasing by the time the move becomes obvious, these are the setups you’ll need to embrace. 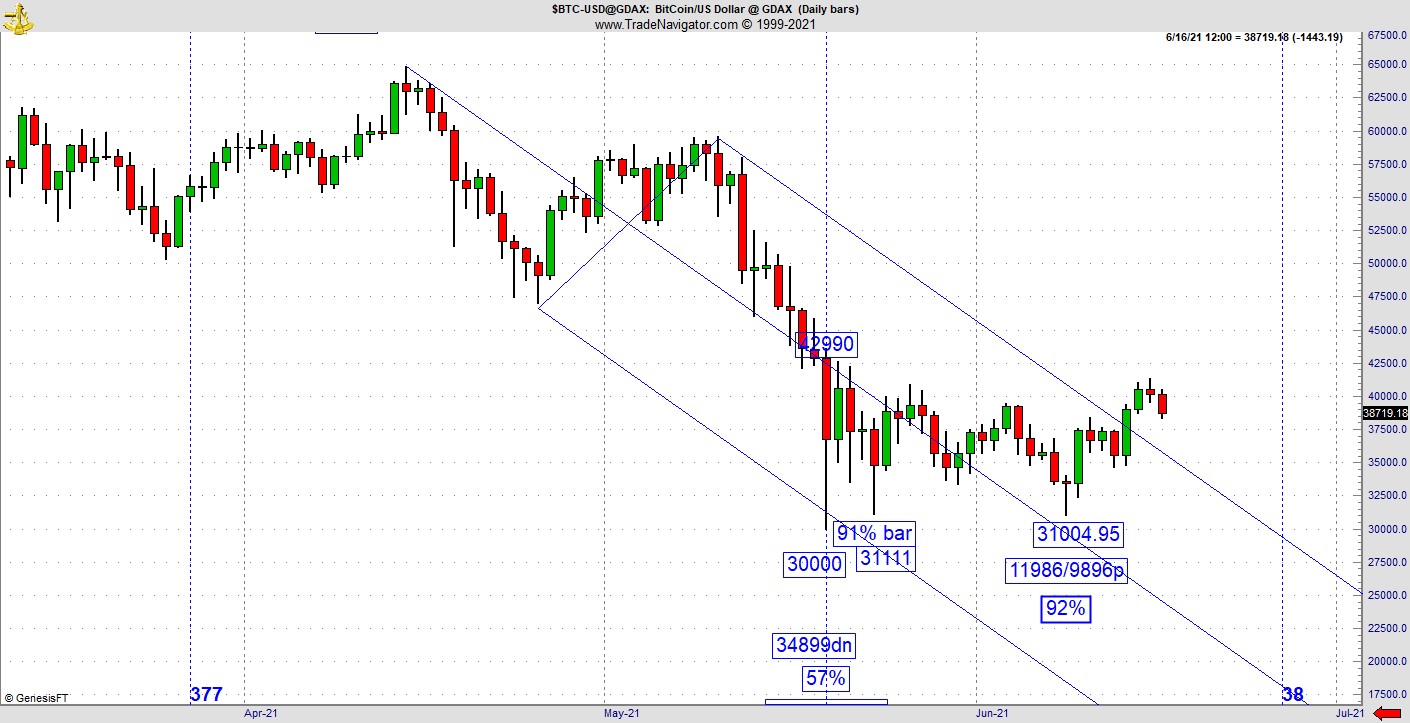 You can see the entire chart achieved my modest goal of hitting the descending channel line. It did more, it pushed through it. Now it stalled, which means the pattern itself knows it is out of the bear channel. How it knows, that’s a mystery. In order for it to stay out, it needs to retest the breakout, which it is starting to do right now. There are things to like about this chart right now. Number one is the outstanding Kairos vibration we had at the bottom.

Number two is two serious tests of the bottom, which held. Finally, it is no longer in the path of least resistance point down. That doesn’t mean it is breaking out, but the indications have improved. The right thing to do was to have bought near last week’s low. Many probably didn’t so if you want to engage a chart like this, you’ll need to find another buyable pullback. Just because it lifted out of the channel does not mean it's automatically going to manifest a sustained move higher.

That being said, the odds do favor the bullish side as opposed to the bearish side with the information we have now. We would not want to see this pattern get another big thrust to test the bottom. Why should it? It already tested twice. A favorable scenario for bulls at this point would be a retest that goes no lower than the congestion area it has held for the better part of the past three weeks. 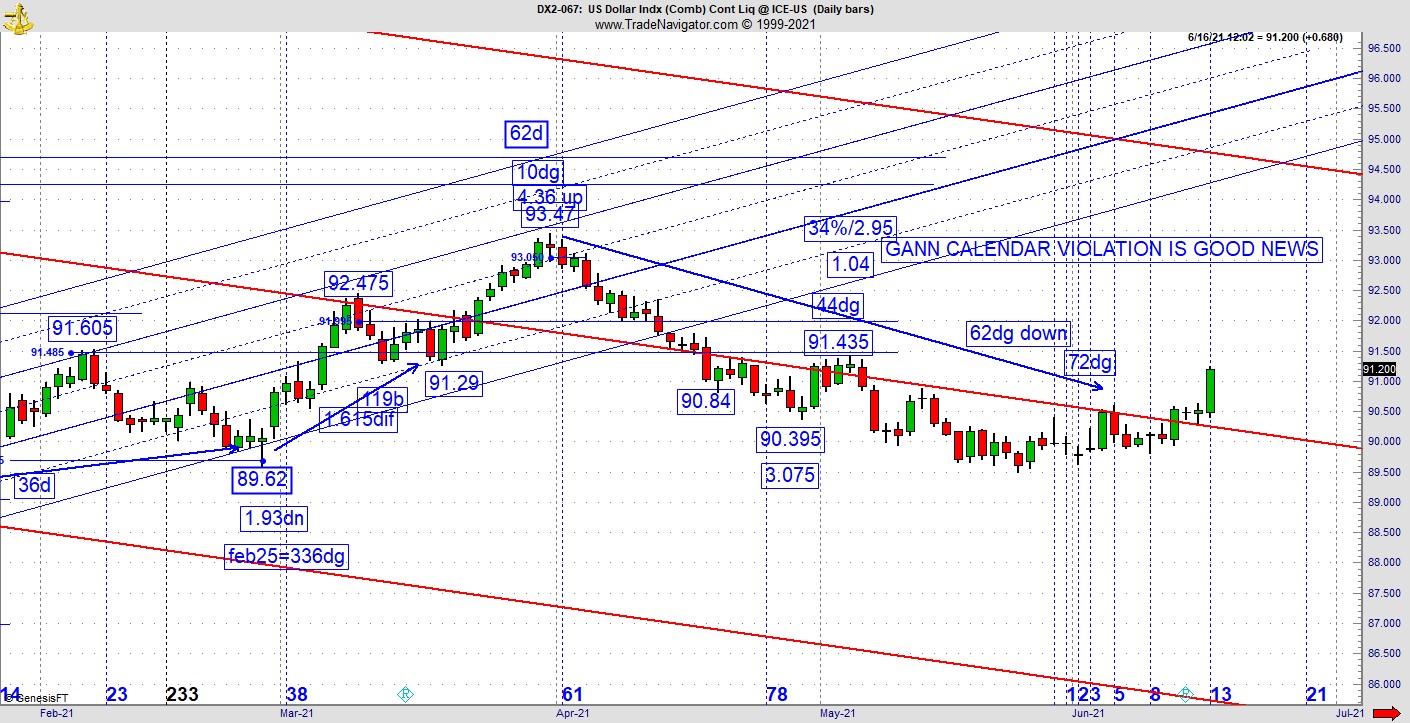 Finally, the greenback did end up violating our Gann calendar reading as well as the midline last Friday. Once good readings like that gets violated, I know something different is developing. Today the US dollar made a major break to the upside, and this may very well open the door to the upper declining bear channel, which is near 94.50. I told you one of our scenarios could be an inversion high into our 161-month window, which commences in August.

This is potentially good news because if the greenback were to rally over the summer, we may not see a hard bottom in this window by October. As Richard Duncan (The Dollar Crisis) likes to say, governments have the power to kick the can down the road longer than most people realize. These statements by the Fed today may have just bought everyone some more time. This is potentially good news given how depressed people are concerning the dollar’s prospects.