The Market Is Stuck in Consolidation Mode

We have been in the same consolidation mode under 4,500 for over a month, says Steve Reitmeister, editor of Reitmeister Total Return.

Really, going back to March, the overall market hasn't moved that much higher on a broad basis. Yet there has been volatility by the truckload.

Gladly there is money to be made if you look in the right places...like leaning on the POWR Ratings to point the way. This has allowed us to carve out gains while others have been served up frustration and disappointment. (Including a modest gain this week while the S&P was in the red).

I will do my level best to share some fresh insights in the commentary below along with notes on our game plan and portfolio of stocks and ETFs.

The most significant news of the past week was served up on Friday when the Government Employment Situation report showed that jobs added came up well short of expectations. Not only were the 194,000 jobs added the lowest result since December, but also woefully under the 475,000 jobs expected.

The Government report on employment is flat out wrong and ADP from last Wednesday showing 568,000 jobs added is right. Because, since when has the government ever done anything better than a for-profit company? (He asks snidely)

More importantly, I have watched investors falsely react to the government report for the last few decades all the while anyone who cares to pay attention would quite easily see that the ADP version does a much better job of reporting the trends. Even within the government report are signs that they are calculating things wrong. That’s because there is no way you could have such modest job growth and still show a fairly large 0.3% monthly drop in the unemployment rate to 4.8%.

The most interesting economic event on the week took place on Tuesday when the NFIB Small Business Optimism index fell to 99.1, the lowest level in six months. This seems odd when the economy is clearly improving on most every level.

The main reason these business owners are becoming less happy campers is that 50% of them noted difficulty in filling open positions. And typically, it is taking pretty significant raises to get people to leave their current employers.

On top of that is the climate in DC where there are discussions of a fairly significant increase in the capital gains tax rate, which would take a nice bite out small business owner compensation. Put me down for wanting business taxes to be as low as humanly possible to encourage these risk takers to hire more and spend more money, which is beneficial to the entire economy. And yes, to also keep these jobs in the US. (I will now put my soap box away).

Now let’s switch on over to a discussion of recent price action. As you will see in the S&P 500 (SPX) chart below this is the first extended break under the 50-day moving average all year. And now the 100-day moving average (4,362) is under pressure as we ended Tuesday’s session just below. 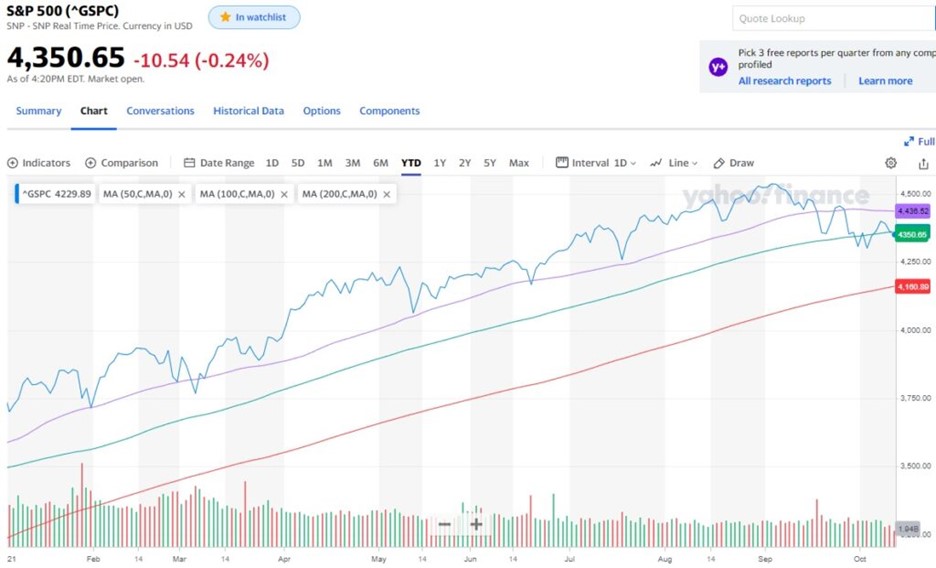 It appears to be that 4,300 is an area of strong support as most investors fully appreciate while market conditions are still quite bullish. So, no reason to let things slip further. However, the longer this weak action goes on, the more I think the 200-day moving average (currently at 4,161) will be tested before this technical correction is over and then we can get back to the fundamental merits of the bull market.

That outcome is FAR from set in stone. And believe that even if it did happen, it would be so short lived and shallow that it’s not worth trading.

This is where we get back to market timing being the toughest game in town. And sometimes just better to stay concentrated on the primary long-term trend.

That remains steadfastly bullish because of an improving economy combined with a low-rate environment making stocks the best investment option around. My guess is the forthcoming earnings season will be a reminder to folks of these fundamental truths reawakening the bullish spirits for the next leg higher.

That is why our portfolio is fully loaded with healthy, growing companies trading at ample discounts to fair value. That is a strategy that has worked quite well so far in 2021...and should continue to do so coming down the home stretch of the year.

New Trades from Wednesday (ATVI, EMN, KLIC): Mixed results for the market = mixed results for our three latest picks. The best of them is EMN, which has a modest green arrow affixed to its name. Simply stated, economically sensitive stocks like EMN are higher beta and will only shine if the market is going higher.

KLIC is the oddball as it continues to shockingly go lower and lower. The reason may indeed be the recent spike in Covid cases in their home base of Singapore. I suspect that $50 should prove to be strong support for shares with a new wave of value investors happy to come on board for this growth juggernaut that now trades for a PE under 10. If not, then we may need to contemplate an exit ourselves.

APA Corp. (APA): The analyst at Morgan Stanley is not waiting for their earnings report to come out now raising his target to a street high of $30. I suspect this will not be the last analyst to want to jump in before earnings given how the higher energy prices NO DOUBT led to superior earnings results.

+6.84% on Friday up to $24.36 and tacking on a bit more today. The future of these shares is very much tied to the future of energy prices. The better that looks, the better the gains. Conversely, if things soften on that front, we will want to take our profits off the table and rotate somewhere else. These hold the keys to how we trade APA going forward.

Alibaba (BABA): I didn’t even realize it at the time I added shares, but it appears that BABA is one of the latest WallStreetBets stocks like GameStop and AMC Entertainment. The difference here is that GME and AMC are bad businesses where share prices were down for good reason. On the other hand, BABA is one of the world’s best companies that was cut in half as the Chinese government made it unclear how it would regulate these companies in the future calling their future growth into question. With BABA shares cut in half, the downside risk is pretty fully accounted for. Thus, an interesting time to hop on board where downside risk is fairly minimal and upside reward is fairly spectacular.

Boyd Gaming (BYD): Hit a nice little jackpot today at +4.3%. Let’s see if that is the start of a nice heater for these shares.

Rates on the Move (TBT): Rates continue to trickle higher now with the 10-year up to 1.6% and TBT climbing above 10% gain since inception. Yes, rates and TBT has been a bit of a roller coaster ride...but the ride aint over...and the ride is starting to roll in our direction. So, keep a firm grip on these shares expecting more upside ahead.

Best Buy (BBY): Shares got as low as $103.42 at the start of the month as investors were ditching consumer stocks for some illogical reason. So, the rise back to $109.38 may not seem overly impressive so far, but hopefully a sign that the worst is behind us and ready for more.

Insperity (NSP): With the 101% gain for JCOM off the boards, NSP climbs into the pole position for our portfolio. I sense it will continue to find stiff resistance at $120 and not get much higher, if at all, until after their next earnings report. The fact, that shares are up 20% since the last quarterly report gives us good incentive to hold on to see if they can repeat that feat. +50% and counting!