Halfway through the month of January and the market landscape is much more constructive, explains Bryan Perry, editor of Cash Machine.

There are several key developments contributing to the sudden change in sentiment and stock performance. Here are some of the catalysts for an improving outlook:

2023 Cost of Living Adjustment (COLA): Based on the increase in the Consumer Price Index, there will be an 8.7% rise in the Cost of Living Adjustment (COLA) for Social Security recipients and for most retired pay and Survivor Benefit Plan annuities effective December 1, 2022. Retirees will see the change in their December 30, 2022, payment and annuitants in their January 3, 2023, payment. The increase was set right at the peak of Consumer Price Index (CPI) and will be a big net positive to retirees with the rate of inflation falling fast. It’s the largest increase since 1981, which saw an hike of 11.2% in the COLA.

Rate of Inflation Moving Lower: Total CPI declined 0.1% month-over-month in December (Briefing.com consensus 0.0%), paced by a 9.4% m/m decline in the gasoline index. Core CPI, which excludes food and energy, increased 0.3% month-over-month as expected. On a year-over-year basis, total CPI was up 6.5%—the smallest increase since October 2021—versus 7.1% in November. Core CPI was up 5.7% versus 6.0% in November. 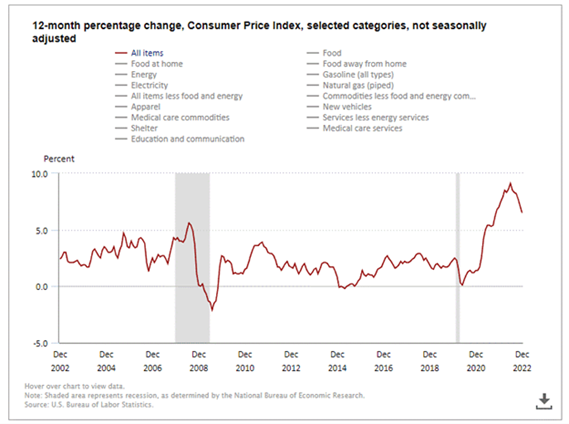 Dollar Weakness Reflects Risk-On Sentiment: The U.S. Dollar Index (DXY) contains six component currencies: the euro, Japanese yen, British pound, Canadian dollar, Swedish krona, and Swiss franc. The DXY has broken key technical levels and is now in a protracted downtrend, as investors that were seeking super safe havens in 2022 are taking on more risk in stocks and other currencies.

It’s interesting to see that the DXY was breaking down in mid-November just as the year-end selling of equities was accelerating. The steep correction in the dollar is a boon to multinational corporations that should show up during the current fourth-quarter earnings season. What was a major forex headwind (strong dollar) is now a solid tailwind (weak dollar). This fact looks likely to extend the selloff in the near term. 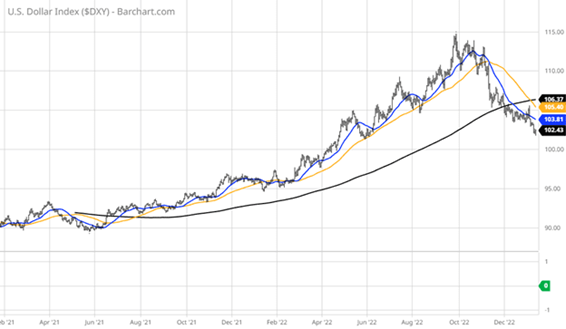 Housing Market Is Resilient: The market for available homes remains undersupplied, even as mortgage rates hit 20-year highs. Housing listings are still down 29% nationwide in the five years ending in October, according to Realtor.com data. Policy experts and economists estimate that the nation’s total housing shortage ranges from one to five million homes—a shocking number during a time of soaring mortgage rates.

Based on the Fed’s likelihood to hike interest rates at least once more and then pause, one can argue that mortgage rates should land at around 5.5% for the 30-year fixed rate in late 2023.

Margin Debt Is Way Down: After peaking at more than $1 trillion in December 2021, when the market hit historic highs. This is a healthy sign in that investors have solid buying power. But with margin rates up considerably, investors are likely to use margin debt more for short-term trading purposes, as opposed to buy-and-hold strategies when compared to when interest rates were super low and the bull market was in full motion. 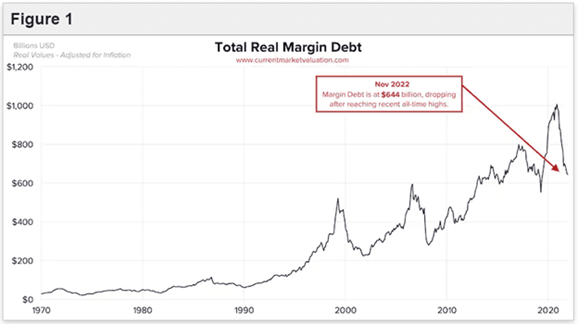 High Yield Market Shows Bullish Price Action: The largest junk bond exchange-traded fund is the iShares iBoxx USD High Yield Corporate Bond ETF (HYG), with $18.49 billion in assets. In the world of investing, bonds trade out of fear and stocks trade out of greed. High-yield bonds have been in rally mode and piercing an overhead technical level as of last week on pretty good volume.

Lastly, the S&P 500 closed barely above its 200-day moving average. This fact is getting a lot of technical chatter, but the prior four attempts to break out failed. All of this makes this attempt off of a higher low somewhat more encouraging. I think it will take a wave of companies providing assurance about business conditions for the current quarter and further out to see a clean break above this key trend line. If this succeeds, this action will send the bears back to their caves. 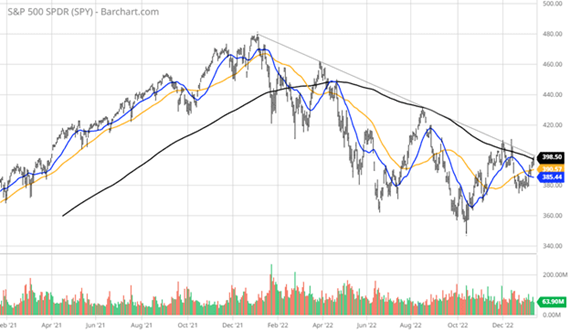 Coming into this week, most sectors and stocks are technically overbought on a short-term basis. There were impressive upside moves in the small-caps, airlines, Bitcoin, gold and high-yield debt, all of which reflect a 180-degree turn in the risk profile of market participants, who are buying into the soft-landing narrative hand over fist.

There is definitely a growing amount of data to get more optimistic about, but the Fed isn’t done raising rates, the yield curve remains very inverted and personal savings are at a pre-pandemic low. The latest data show Americans are saving just 2.3%, or $2.30 of every $100 they earn after paying taxes, down from 7.5% as recently as December 2021. Historically, that’s very low. From 2015 to 2019, for example, this rate averaged around 7.6%.

As of the third quarter of 2022, Americans hold $925 billion in credit card debt, which is a rise of $38 billion since Q2 2022. The Federal Reserve of New York says this is a 15% year-over-year rise—the biggest jump we’ve seen in more than 20 years. How this will all play out next month will be intriguing, given the US is a consumer-driven economy. But for now, unemployment is at 3.5%, inflation is coming under control and the market is voting with both feet that a recession is going to be averted. Now, its up to earnings season to keep the party going.