The Chart Pattern as Easy as ABC 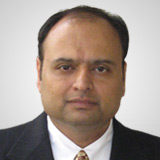 Technical trader Suri Duddella explains that the basic ABC pattern has been a continually reliable trading signal in these and all market conditions.

Absolutely, chart patterns; there are maybe about 65 patterns, according to my book. In that, there is one single pattern, which is a very universal pattern, which comes into another dozen or so patterns, and that is called an ABC pattern.

If you look at Elliott Wave, the beginning form of Elliott Wave, beginning zero, one, two, maybe it’s called an ABC, and then they also call them 1-2-3 waves, but this pattern actually—this ABC—exists in many, many other patterns.

Since it’s universal, if anybody learns how to recognize this ABC pattern and then trade it, they can actually use this knowledge to create a dozen more patterns because of its basic structure, which exists in this dozen or so patterns.

Is it almost a self-fulfilling prophecy then if everyone is looking at the same thing and reading it the same way?

I think that is a possibility, but on the other hand, pattern recognition is not, because even recognizing and also actually writing the code to develop it is much more complex.

The people who can do it, they would be able to use this knowledge. Across the board, of course, there are people who cannot recognize this stuff, so because of that reason, it is maybe self-fulfilling to an extent, but you have to know which type of patterns you can pick and where you want to trade it within the market context.

That’s the critical part of the success, so because of that reason, I guess it is self-fulfilling, but it’s actually probably not on the other side, too.

I should mention you wrote a book and you can identify 65 patterns; which pattern do you think is the most superior?

Well, in my view, the ABC is the basic pattern because this is actually like a fact, a lot of C waves go into other patterns. In my view, ABC is one of the most superior patterns to trade.

I guess when you look at this pattern embedded into other patterns surrounding it, those are the [best] patterns. For example, the pattern with the highest success rate that I’ve got in my research is the broadening pattern, which is like a megaphone pattern. It is kind of a wave pattern, but it does exist, and when it forms, the success rate for that particular pattern is high.

You could also use the same type of ABC to detect even the megaphone patterns.